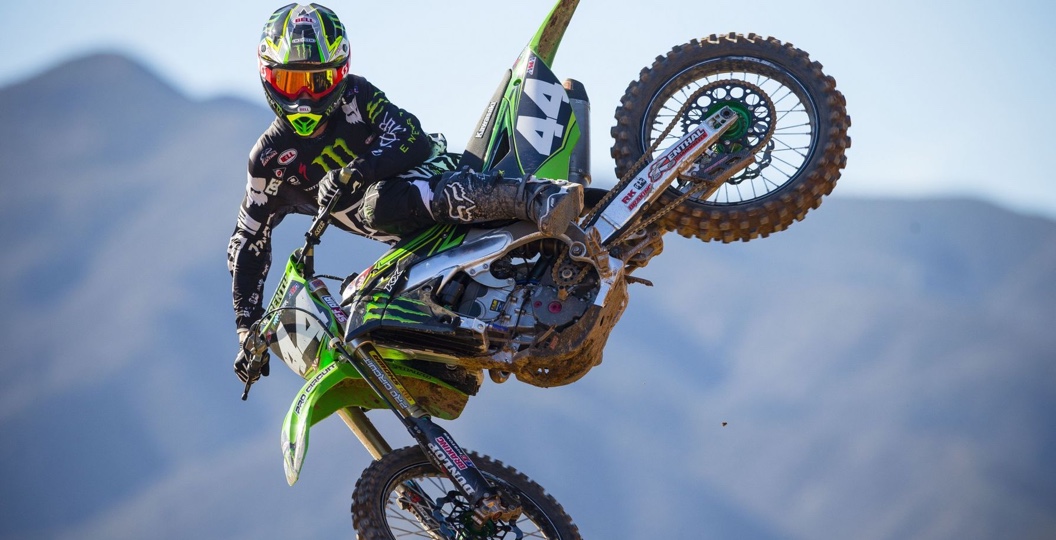 Life’s been tough for the once powerful Monster Energy Pro Circuit Kawasaki team the last couple of years. Once dominant, the gap between Mitch Payton’s bikes and the others has closed, the amateur scouting advantage that Team Green had has disappeared and don’t look now, but they’re just another team in the pits these days.

This year, Joey Savatgy has put in some good rides on the west coast and they certainly needed that after a miserable 2015 where Savatgy got the team’s only win. The east coast in 2016 has been tough with both Tyler Bowers and the now-injured Arnaud Tonus failing to get a podium. With Tonus’ injury the team needed a fill-in rider, so selected long-time privateer and former Star Yamaha rider Gannon Audette to ride the rest of supercross. Audette had some success a few years ago, but he’s been hurt a few times since then and has been a JAG (just another guy) for the last few years.

What do you know? Audette pulled the holeshot in the main event and rode strong to get a third, his first ever pro podium. Hands up who picked Gannon Audette to score PC’s first podium on the east? It’s a real cool story for sure; the working class hero getting a shot on the big team and afterwards Audette was all smiles.

“It was two weeks ago on Monday Mitch ended up calling me” said Audette about getting ‘the call’. “He asked me if I wanted to do it and everything and then gave me the okay on Tuesday. Then I flew out on Wednesday and it just kind of went from there. I flew out the next day and I’ve just been testing and everything out there with those guys. It’s been a good week and a half with them.”

Audette had been pitted with the Legends and Heroes squad at the races, which isn’t really a race team. It’s more of an exhibition each week of old bikes and they honour an old racer. This was Audette’s “team” but he was still thankful for all that they have done for him.

“I can’t thank all of them enough. They’ve helped me get to where I am today. The season didn’t start out exactly how I wanted it to with a fourteenth and a fifteenth. Now I got on the podium with the Pro Circuit Kawasaki guys and it’s just awesome” said Audette after the main.

Audette was catching Martin Davalos late in the race before Davalos handed the third spot over with a crash and Audette keenly knew that was the last spot on the box. “Yeah, I knew Marty was third and I was catching him. We were all a little bit sketchy in the dragon’s back before the finish line, and I think he ended up coming together with a lapper and ended up crashing” said Gannon. “I just kind of tried to ride a little bit timid and just wanted to finish it out and get on that podium. It was just awesome.”

While Audette gets the chance of a lifetime and is a very-unlikely saviour for the Pro Circuit team, the kid that everyone thought would be on the box many times for Payton, Adam Cianciarulo, is getting ready to come back from his latest injury.

Two shoulder surgeries (same issue, different shoulders) was almost immediately followed by a wrist injury while getting ready for supercross. The can’t-miss-kid (three wins in five career supercrosses by the way) has had a series of stops and starts, but he’ll be on the gate for the first round of the motocross series in the middle of May.

“Outdoors is the goal. We should be good for that,” Cianciarulo told us on the PulpMX Show on Monday. “Basically I was just getting ready for supercross and I crashed at Milestone. I broke the navicular in my wrist, which is a scary bone to talk about. But I guess the main complication with that normally is the ligaments and all that stuff. I don’t really know specifics. All I know is mine is relatively straight forward. It was just an eight-week recovery time. I’m riding with a wrist brace on it right now. I’ve only been back on the bike three days, but it feels really good.”

Last season Adam started off by posting the fastest qualifying time at the first outdoor race (he missed all of SX with shoulder surgery) then led the opening laps of moto one before tipping over. But that was a bit of a false positive in that Adam knew he couldn’t shake the feeling that he wasn’t in shape. Run down, tired and unable to rest his way out of it, Cianciarulo re-evaluated his training program and parted ways with trainer Aldon Baker. Yes, he of the all those wins and titles with riders like Ryan Dungey, Ryan Villopoto, James Stewart and more.

Big decision for the now big man but one that Adam felt he had to make. “To be honest with you, I think I might have started with him (Baker) a little bit too young. You go onto the program it works for some and the program doesn’t work for people. You’ve seen it in the past. The thing about it is it is kind of one program,” explains Adam. “There’s little adjustments made for different people and maybe if you’re not feeling so good this day maybe you take the forty-five minute loop on the road bike road and not the hour. But other than that, it’s not rocket science. It’s one program. For me, that program just didn’t seem like it was working for me. It seemed like I was kind of going backwards a little bit.

There’s a reason Cianciarulo was locked up with a five-year contract while still an amateur and there’s a reason he’s got all those amateur national title number one plates on his wall. As well, you don’t luck into that three for five supercross win record. It hasn’t been easy nor has it gone smoothly for Cianciarulo and Pro Circuit, but he’s got the work ethic, he’s got a great team and if he can stay healthy he’ll build his way up this summer.

“I just believe in my speed, the talent I have and the bike that I have. I believe in all that stuff so much. If I didn’t I think I would be done by now. You doubt yourself so much when you first get hurt, but if you don’t have that true belief, that deep down knowing that you can do it… You can’t just think; you have to be able to know. If I didn’t have that, I think I’d be done by now.” He’s not done. Not by a long shot.