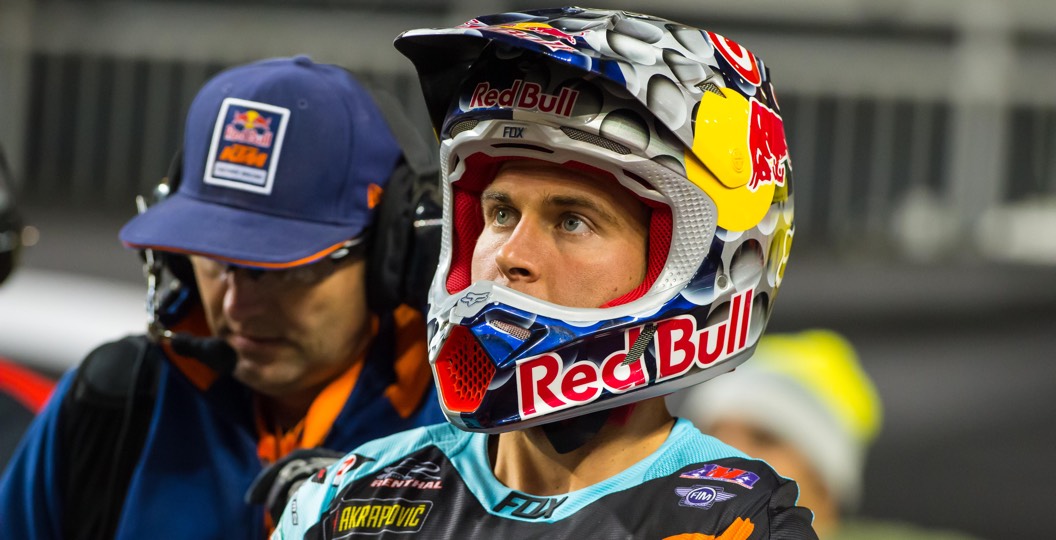 A couple things came to mind watching Detroit Supercross, which was round eleven out of seventeen of the Monster Energy Supercross series and saw a different winner from the rider that took the checkers for what we believe is the first time in supercross history.

As we all know, Red Bull KTM’s Ryan Dungey lost the win when it was determined that he jumped a double with the red cross flags indicating a downed rider. Ryan was docked two positions and the win was given to Rockstar Husqvarna’s Jason Anderson, who took the checkers in second. The penalty being enforced isn’t anything new, we’ve seen it done before and Anderson himself lost a podium at San Diego when he was moved from third to fifth for doing the same thing as Dungey.

Dungey and his team allegedly weren’t happy with the official’s position on the jump coming right out of a turn and felt it was unfair. Yamaha’s Chad Reed saw the flag and immediately hit his brakes, but there were other witnesses that said many other riders did the same thing as Dungey and were not penalized.

The rule itself is fine, safety can’t be messed with, but it’s long overdue in this reporter’s opinion for a travelling flag safety team. Whether it’s supercross or Lucas Oil Pro Motocross, there are examples every week of flagging gone wrong. The flagging crew consists of AMA officials who are in charge of when the red cross flag goes out or local volunteers who man the yellow flags and, in both cases, I’ve seen so many flaws.

Whether it’s the volunteers directing riders towards the downed rider, the red cross coming out needlessly or way before it needs to or whatever else, there’s never much talk about trying to fix what’s become a major problem. Never mind the application of the blue flags for riders being lapped and what a mess that is as well.

There’s enough money in both series and at stake to dedicate a group of people who know what to do in any situation. Where to stand, when to wave it, and what flag is needed are all things that I see need improvement almost every weekend. Whether Dungey was in the right or not, it’s time to step up the quality of the flagging. There’s just too much at stake.

Whether Dungey was docked or not, the fact remains that there was a 450SX podium without a Japanese bike on it for the first time this season and maybe ever. Jason Anderson on the KTM Husqvarna and Dungey’s teammate, Marvin Musquin, joined him up there to make an all Austrian machine top three. As someone that was on the first ever KTM factory team here in America in 2000 and 2001, the orange machines have come a long way.

Shutting that effort down after six years, KTM joined forces with a couple of private teams before re-launching with the hire of Roger DeCoster. A couple of years ago KTM’s primary shareholder acquired Husqvarna from the Cagiva guys and we now have another brand in the sport that is ninety-five per cent reliant on KTM technology.

We’re at the point now in professional racing where KTM is very dominant and their bikes are great. Whether it’s SX, MX, the GPs or off-road, it seems that podiums everywhere are splashed with orange or, in the case of this week, covered in it (with some white overcoat).

Don’t think the Japanese haven’t noticed this. I was talking with a VIP on the racing side of an OEM about a month ago and he remarked that they’ve had the “sh*t kicked out of them” by KTM and this has been a complete surprise. This person mentioned that it was a good thing that KTM’s come in and done what they have, because maybe it woke the Japanese up a bit.

They’re very competitive companies and this can’t be sitting well with them. This VIP predicted that his own OEM was gearing up to spend some money and make improvements to their bike and perhaps this orange runaway train prompted Yamaha to come back in after being away for six years.

Honda’s been toying with a hydraulic clutch and electric start on their race machines, all things that have been standard on a KTM for years. They’ve got an all-new machine coming out next year. Kawasaki launched a pretty different 2016 machine this year that they’re still working the bugs out on. Yamaha’s gone a totally different direction with their bike and, as mentioned, are back racing with direct factory involvement. Only Suzuki seems to be spinning its wheels a bit but in 2018 they’ll release a new machine as well.

If this person at the OEM was to be believed KTM has awoken some sleeping giants and they’re not happy with what’s been going on. That’s good to hear because competition makes everyone better but it also makes me wonder when I see the present and the future of KTM/Husky that maybe I should’ve chimed it and asked if it might be too late?