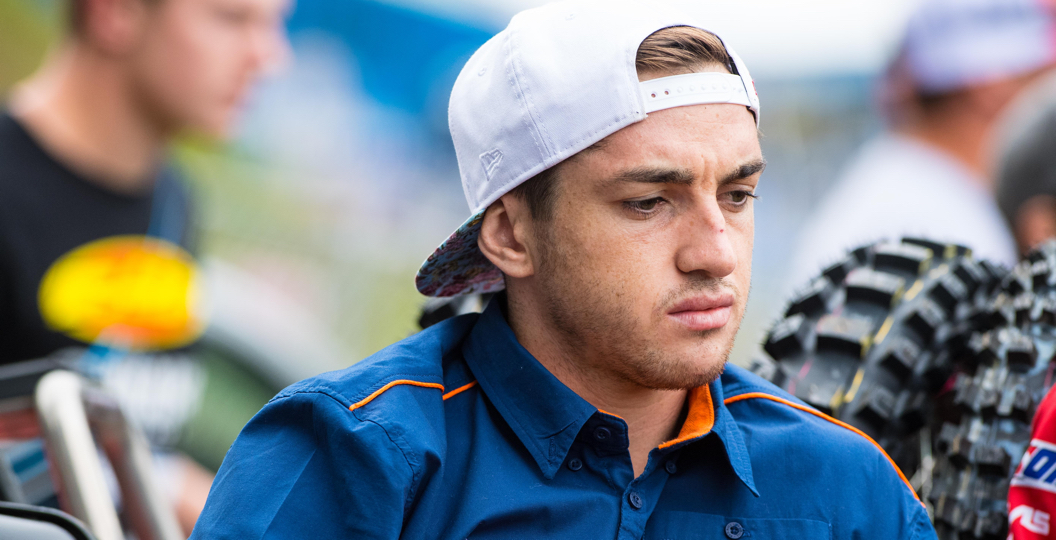 All Dean Wilson wants is a chance. The former 250MX champion is one of those riders over here that has been left out in the cold and it is a bit puzzling as to why. Wilson has won a tough outdoor national title and is the winningest 250SX rider in history who has NOT won an indoor title. Heck, he won a 450SX heat race last year when the field was fresh. Wilson’s personable, funny and fast. So, why is he struggling to find a ride?

Well, the obvious answer is that he cannot stay healthy. Wilson’s suffered two consecutive ACL tears (he won’t say it, but people around him have hinted that the first one wasn’t repaired properly) while on the Red Bull KTM team. Wilson only managed to line up for thirteen out of fifty-eight races while on the orange team and team manager Roger DeCoster decided to hire Trey Canard for 2017 to take Wilson’s spot. Imagine that, DeCoster went with a rider who has only lined up for fifty-eight percent of his races at Honda over Wilson. A cruel reminder of how much of a business this sport is.

“We (Dean and his agent) got a meeting with Keith McCarty at Yamaha and it went pretty well,” Dean told us on Monday night. “He’s a pretty old school dude and says it the way it is. It was a pretty interesting meeting we had. It went well though and he was kind enough to let me borrow a bike. So, pretty much, honestly how it went was he said, ‘Let’s get you on a bike and see how you like it.’ That was it. I said I love it. I love the color blue.”

You see; Wilson is not just sitting at home and not riding like some other riders in his situation have done in the past. He’s got plenty of money to buy a bike but, thinking that an RCH Suzuki ride might materialize, Dean went and borrowed an RMZ450 from an Internet MX site and got busy on yellow. When that ride fell through, Wilson got the Yamaha and is hoping something comes together for him on the factory team.

Yamaha have lost JGR so they are going into the 2017 supercross season with just two riders (Webb and Reed) and then, for 450MX, it’ll be just Webb. One would think with some freed up budget from their offer to JGR, Yamaha might just go with a third guy on their new factory team.

With riders like Malcolm and James Stewart, Jake Weimer and more still looking to find a place, Wilson’s in some fast company and realizes that he’s got to make some sacrifices. “I told Keith McCarty that I would ride for free,” he said. “I wanted to have a year healthy and just a good year. I made pretty good money the past few years, so if I can just rebuild myself this year it would be good. Good equipment, good team. I don’t care about the money.”

There has been some interest from teams in Canada and nothing happening in Europe (Wilson has always said he would like to race in MXGP before he hangs it up). Wilson admits that he’ll line up as a privateer on the west coast rounds and then perhaps wait for the inevitable injury and a fill-in spot. It’s not ideal, but sitting around doing nothing but worrying doesn’t really work for your health either.

Wilson admits that there were some stressful times as no offers came his way but now, with Anaheim 1 just eight weeks away, he’s at peace with his lot in life.

“I’m still training with my trainer Tyla [Rattray]. I’m riding. I’m still keeping in shape. Towards the end of the nationals is when I was all about killing myself, because I was stressing out so bad about the whole situation but now it’s like, dude, we’re in November. I should be on a supercross track,” Dean says.

“I’m just so far past the stress point and it is just like, okay, if things happen I’m just going to have to work a little overtime, which I’m totally fine with,” he continues. “I’m just riding, keeping in shape and I’m actually really enjoying riding right now. I don’t know what’s going on. I’m having a lot of fun. Even though I may not be in the best position in my career, I feel like I’m in a good place.”

Hey, whatever a guy has to tell himself right? I think whomever signs the number fifteen is going to get a motivated, fast rider who is looking to rebuild himself for a great price. That’s a killer combination.