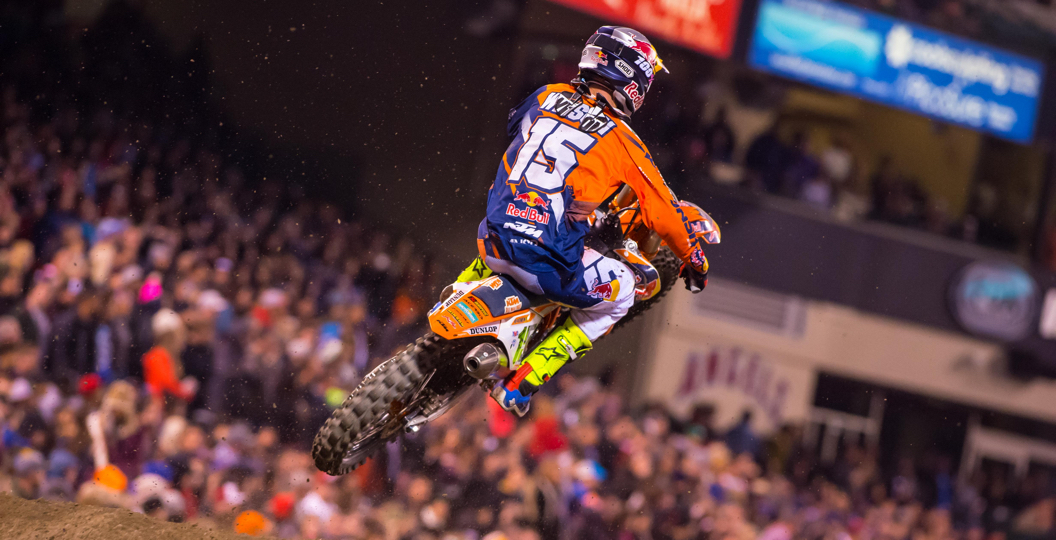 We’re just past halfway in the Monster Energy Supercross series and although the calendar says it’s early March now, don’t be fooled, 2017 is already here when it comes to riders and teams. Yep, it’s silly season time and since I’ve been on the scene in 1996, things seem to get going earlier and earlier every year.

We know Cooper Webb signed a multi-year deal with factory Yamaha to be Chad Reed’s teammate and a Monster athlete. We think Ken Roczen is going to Honda and after that, just about every 450 rider’s contract is up for grabs outside of James Stewart, Ryan Dungey, Eli Tomac, Marvin Musquin, Christophe Pourcel, Jason Anderson and Justin Barcia. There will be lots of movement in the pits for next year.

Everyone talks about the guys that are killing it and for good reason. They’re doing well and people want to hear about them and where they’re going in ‘17. I get it but, today, you readers of MX Vice are in for a treat as I’m going to look at a few riders that are below the radar for different reasons and what they need to do to get their careers back on track and start being the guys that we’re all talking about next year.

Dean Wilson: The Red Bull KTM rider tore his repaired-in-2015 ACL in his knee early this season in supercross and, just like last year, he’ll be out most of the year. It’s been nothing but a series of tough breaks for Wilson since he won the 250MX title on Pro Circuit and this injury might be the one that gets him off factory equipment. With his two-year KTM deal ending, Wilson will almost certainly find himself with nothing but non-factory team offers. If he wants to make anywhere near the amount of money he’s used to he’ll be forced to head over to the GP’s, a series that the Scotsman has already said he’d like to race one day. He’ll find himself with a ride, if he doesn’t want to do that, but it will be on a production bike with a lower level team.

Wil Hahn: Like Wilson, Wil has been a magnet for the dirt in the last few years and he’ll also be forced to build himself back up with some good results. This latest crash that will probably leave him out of action for the rest of 2016 wasn’t even his fault, but when it rains it pours for the friendly Hahn. Wilbur’s got to get some momentum going on the 450 (he can’t ride the 250) and he’ll be looking at a Cycle Trader Yamaha team, or maybe his good friend Bobby Hewitt will find a spot for him on the Rockstar Husky team? Whatever brand of bike it is, Wilbur’s got to just get races under his belt.

Josh Grant: JG33 is getting Hahn’s spot on the factory Kawasaki team for the rest of the year and it will be interesting to see if he’s spurned again for the ride like he was last year when he also filled in for Hahn. Grant’s been out all of ’16 waiting for a ride that he feels is worth it, but his seventh at Daytona last week probably opened a few eyes in the pits. I know Grant was hoping Kawasaki would put a third bike with him on the track for this year, but it didn’t happen. Kawasaki will be looking to fill Hahn’s spot on a permanent basis next year and although rumors have Honda’s Trey Canard perhaps going there, Grant’s got time to get some results with a crew he already knows.

Kyle Chisholm: A working man’s veteran at this stage of his career, Chisholm got hurt at the second race of the year and is hopefully eyeing up an outdoor return. Chiz was in his first year on the Rocky Mountain Honda team and it’ll be interesting to see what the team does next year. They don’t place a premium on results like other teams, but they want some kind of decent finishes. Kyle’s easy to work with and he’s a bit of a name rider, so I could see him going back there next year.

Blake Baggett: Blake’s kind of lucky. Well not in that he got hurt, but in that his weakness is supercross and his 2016 indoor season has just been crap so far. What he has to do to stay on a factory Yoshimura Suzuki is stay healthy through the end of the supercross season and then get ready to do well when it comes to outdoors, a series that Blake’s always been very good at. He’s a perfect second rider for a team, so I can see Suzuki keeping him there if he’s at all decent in the outdoors.