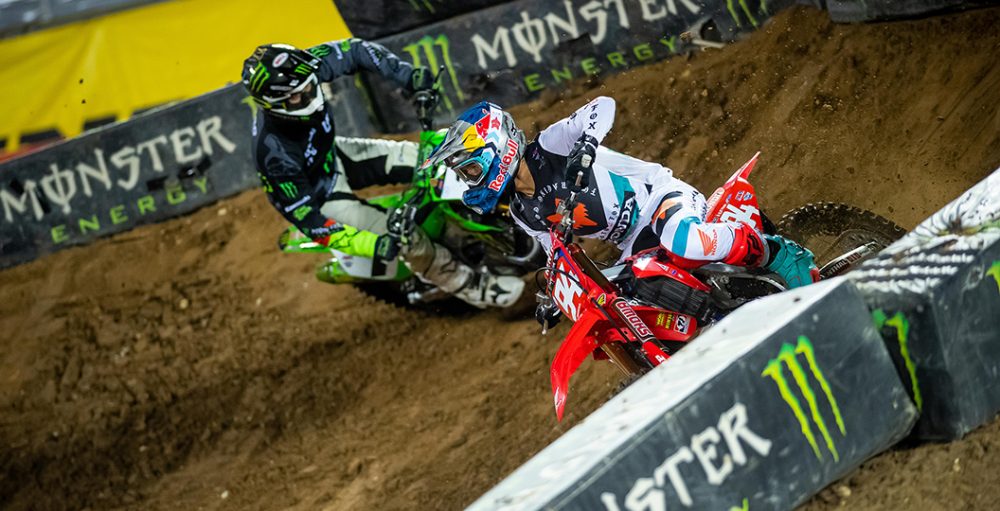 The 2021 Monster Energy Supercross series riders and teams just had their first week off of the season this past and when the halfway flag gets thrown this Saturday night at Daytona, we’ll officially be halfway through the 450SX series.

Here are some random predictions on some random things in regard to both the 450SX and 250SX classes.

– It’s been a while since we saw anyone not named Cooper Webb or Ken Roczen win a 450SX main event but we may finally get someone different this weekend. Now, don’t hold me to that because the top two riders in the points have been so good. This is Daytona though. This is something different for the guys and we know how good Eli Tomac is down at the speedway. I’m not going to stamp a Tomac win but it says here he will be more competitive this weekend than he has been. Good vibes will be hanging in the air for ET and even if he does not get a start, he can make it work there. I predict a strong performance for Tomac this weekend with either a win or a runner-up ride.

– Honda’s Chase Sexton makes his return to racing after a crash in Houston while leading the 450SX main. The #23 will be a boost to the series and I think he’ll do something memorable this weekend. I do not know what exactly; maybe win a heat, lead some laps or podium the whole thing? I’m not sure but Sexton will make a splash. You watch!

– Jason Anderson has been getting progressively better since his awful opening round and subsequent finger injury. Now, how much his improvement had to do with the harder packed Orlando track is something we’ll see. I think he’s on the right track to be top five or on the podium at Daytona.

– Marvin Musquin is very good at Daytona – he’s had some hell of good rides there with a couple of 450SX podiums and a win in 250SX. It’s been a hot and cold season for Marv, but he’ll be hot this weekend.

– Dylan Ferrandis was great at Orlando 2 but had just an eleventh to show for it after he had to pull into the mechanics area for mid-race repairs. On this track, with more of an outdoor-ish feel to it, I think Ferrandis really shines. I predict a top five for the Yamaha rider. Yeah, I said it.

– I predict Justin Cooper wins the 250SX West main event. Boring, right? I know. This series is his to lose now with Jeremy Martin out with a shoulder injury. Cooper was not even at one hundred percent at Orlando 2 and he did that. Wait until he gets an extra week of prep for this one.

– I’m not sure what Star Yamaha team owner Bobby Regan said or did to rookies Nate Thrasher and Jarrett Frye in the time since Orlando 2 but I guarantee you it was not good. I’ve heard many stories about how Regan has talked to riders under the Star tent and with both kids underperforming at their first ever supercross, I predict they both come out with better performances than what we saw in Orlando. How much better? I do not know, just better.

– Garrett Marchbanks does not win this main event like he did last year but he does end up on the podium, which is a good result for him and his team.

– Troll Train will shine this weekend and redeem himself after KO’ing himself last race. That’s what “we” do.

– I think Martin Davalos will fall down at some point in this weekend’s main event. I hate being a negative Nancy here but he’s done it in every single race this year but one. I cannot see how Marty gets through a rough and tumble Daytona track where things change every lap without making a mistake but maybe this is exactly what Marty needs to stay on two wheels!

– I predict that Kyle Chisholm will continue to Chiz, because Chiz will always Chiz. In fact, he might have some extra Chiz happening because he is usually pretty solid at Daytona.

– This one is not tough to predict but Ken Roczen will continue his great season with another great ride. Hey man, I can’t be wrong if I just predict stuff like this!