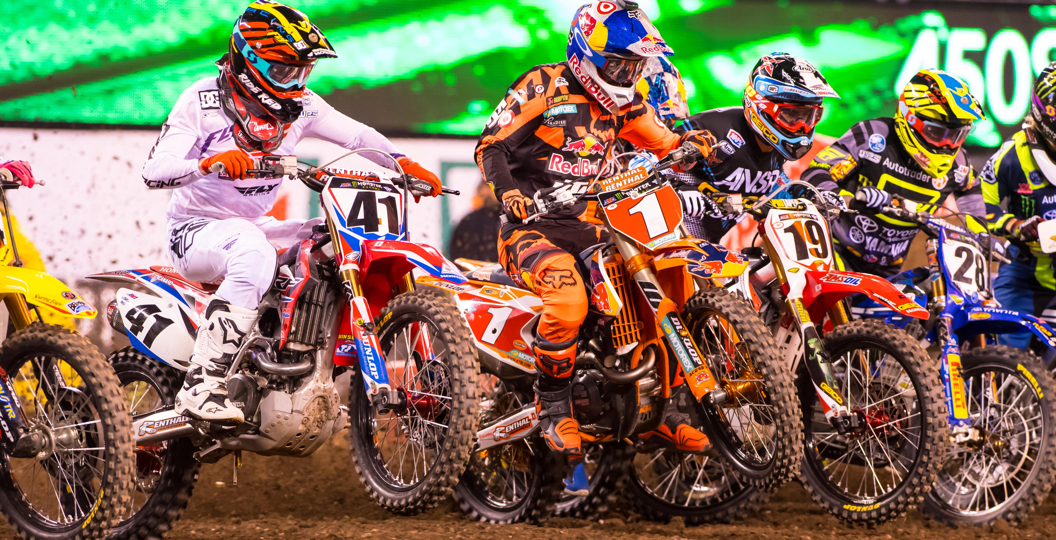 The Matthes Report: The Chase

This 450SX season must have been what the confederates felt like all those years ago in the Civil War. They knew that it was only a matter of time before surrender as General Sherman mowed through Georgia. To bring it around to our sport, it was inevitable that Ryan Dungey was going to be the 2016 450SX champion sometime around round eight in, where else, Georgia (more specifically, Atlanta), which was the halfway point of the series. At this point he had an almost two-race lead in the points. The other riders saw the march coming and like those confederates, they couldn’t stop it.

If you’re anyone other than Red Bull KTM and Dungey, this isn’t a great thing. The promoters, the other riders, the fans and the media all want to see a great title fight all the way to the final round or at least perhaps with two or three to go. Knowing you had nine rounds after Atlanta that was worth little more than seeding behind Dungey is a tough sell for everyone.

Understanding each race is a race in itself is fine but watching a rider dominate a series, whether it’s Dungey, Ryan Villopoto, Ricky Carmichael or Jeremy McGrath, isn’t always a great thing for the interest of the series or in the tickets sold department. In the last twenty-six years of the sport, only five times has the race for the title come down to the last race of the year. That’s simply not enough.

So, with this knowledge, it’s no secret the folks at Feld Entertainment, who promote the series, are looking at implementing a Chase-style format or playoff format for next year’s series. It’s not a lock that it’s going to happen, but it seems to be gaining momentum behind the scenes pending the AMA/FIM approving it.

Basically it’s rumored that it would work like this. The first twelve rounds of the series are about seeding to get into the Chase for the title. I’ve heard the top ten in the points would have a chance for the championship. If you have a race win, but aren’t in the top ten, then you get in as well.

There will be a handicap for the rider leading the points after twelve rounds and so on down. If Dungey is in that position he’ll get a bonus for that, as well as a bonus for individual race wins. So it’s not everyone starting at zero, you’ll gather points for your efforts over the twelve weeks and then it’s all out for the last five to determine the 450SX supercross champion.

Each race of the Chase will be ‘a race within a race’, with riders out of the title fight still going for points in the overall standings and bonus money and the riders in the Chase fighting for every single point. The outcry by fans at the rumors a chase style format may be coming is loud, but, if you look at any motorsport or stick and ball sport, they change formats and rules year to year. Not in our sport though!

It’s twenty-five points for a win, twenty-two for second etc. A rider qualifies for the main out of a heat, every main is twenty laps and so on. Change is a good thing and we’ve seen whether it’s a new website or a rule change, the complaints dwindle over time as people get used to something being different.

The Feld guys have used this format in the AMSOIL Arenacross for a number of years and the rider leading at the end of the ‘regular season’ has only lost the title one time, when Zach Ames lost to Tyler Bowers. Bowers was a multi-time champion and had been hurt a bit before the points were reset. In effect, he was the best rider in the series without a doubt.

We ran the numbers for the last six years of 450SX using a seven race “chase”, as opposed to the five that’s rumored, and the only rider that didn’t win the 450SX title that was leading was Ryan Villopoto in 2012 when he blew out his knee in Seattle and missed the last two races. Justin Brayton, then on a factory Honda, would’ve been the 450SX champion.

In case you couldn’t tell, I’m in favor of this change. I’m in favor of any change in the series, in fact, because we’ve been stagnant for way too long. If I could wave a magic wand I would also revise the points structure, have some races with a couple of ten-lap mains, I would give out points for qualifying and holeshots and I would bring the riders back out for a series of two lap bracket races where you would also get points for finishing in that.

With the average ticket price of close to one hundred American dollars to see a supercross race, I think you need to bring up the intensity of the series and as well showcase these top riders more during the night (which the bracket races would do). I know some of the teams and riders may not agree and that’s fine, I was once wrapped into this world of working for a team and being unable to see past your nose. The big picture is we’re entertainment nowadays and we need to deliver more of that to our fans. This chase format, if it goes through, is a big step forward in my mind.