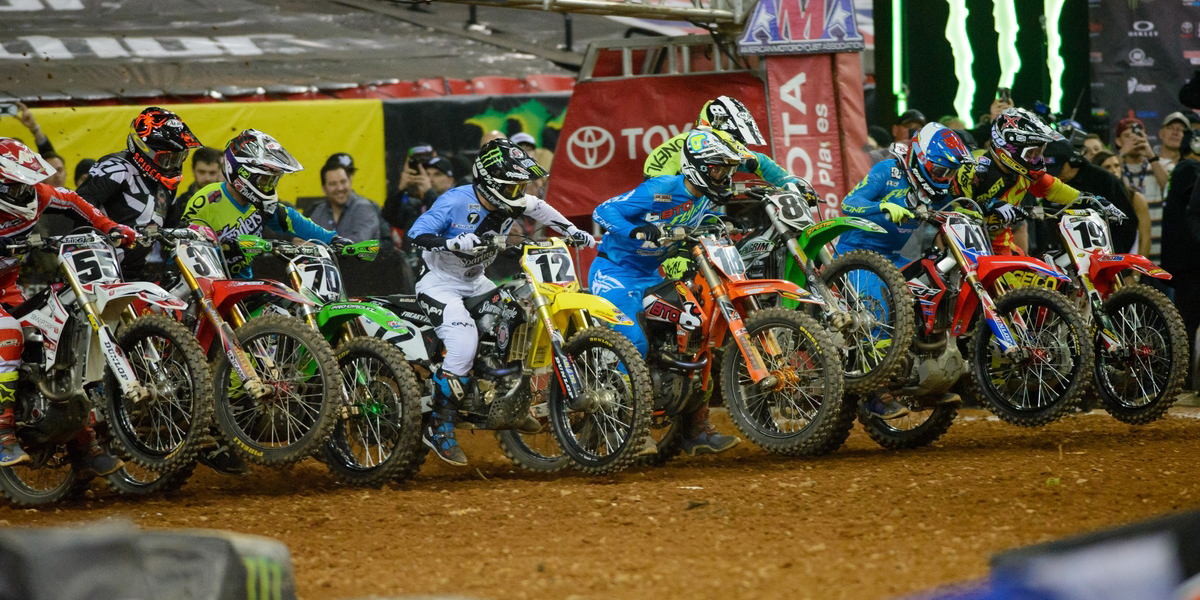 Welcome to my debut column for MXVice.com. I’ll be here every week covering the sport from this side of the ocean. The Vice boys did a great job at the opening rounds of supercross, but now the GPs have started up, they’re back there, I’m here and let’s get right to this.

Speaking of the opening round of the MXGP in Qatar, can we get some normal numbers on the very best riders please? Seeing Gajser, Bobryshev, Febvre, Cairoli out there with the three digit numbers is just weird. I have a lot of issues with the GPs but, for today, getting double or single digits on the sports best riders is one of them.

When the riders get the halfway flag this weekend at round nine in Daytona, the 2016 Monster Energy Supercross series will be half over. Despite all this talk about the deep field (by myself as well), we’ve got a Ryan Dungey runaway dammit.

This weekend we should all expect more of the same, but it is Daytona. There isn’t a race on the schedule -including outdoors – that has changed as much as Daytona over the years. Held inside a stock car speedway, Daytona used to be a thirty man main event and held in the middle of the day with long lap times. Sometimes the main event was just about forty minutes!

Those days are gone and it’s much more of a traditional supercross with twenty-two man gates, it’s at night and the track builders model it real close to what the riders see the other sixteen weeks. But, still, it gets rough as the dirt is more sand than anything else. The jumps get rutty, there are berms, ruts and braking bumps that still make it by far the roughest supercross of the year. Most teams use standard supercross suspension, but a little softened up for the small bumps entering and exiting the corner. Although the lights are pretty good, there are still a ton of shadows out there that cause riders some issues as well.

Dungey’s got over a race lead in the points and has to just manage this thing over the second half to win his third 450SX title. This guy is just ridiculous and after missing the podium at the first race of last season, he’s on a 25-race podium streak! Yes, you read that right.

Last week in Atlanta we saw Ryan almost land on his teammate Marvin Musquin on the last lap and you know if that was Trey Canard or someone, it would’ve been curtains. But, when things are rolling for you, you’re Ryan Dungey and you miss Marvin’s bike by maybe a foot.

Chad Reed was back on the podium last week and he loves Daytona. He’s had some memorable races there over the years and is always a factor at the speedway one way or another. Reed was one of the very first guys to get his practice track guy to build him a “Daytona” section on his practice track to mimic the obstacles that one sees there every year. Chad’s a hard guy to figure out sometimes but when he’s in a good mood, he can win. After ending his little mini-slump last week, I’d say he’s a good bet for the podium, maybe even better!

“Luckily I didn’t find him after the race, because I was about to do some things that probably would have not been good for me,” Honda’s Cole Seely told me after the race about his run-in with Husqvarna’s Jason Anderson. “Then he came over about an hour after the race and tried to apologize, but I just told him that I didn’t want to talk to him. I respected him a lot, because we fought really hard for that west championship two years ago and I think we have a lot of respect from each other because of that. Now I have none for him. I basically just want to retaliate the rest of the season.”

Harsh words from Seely, as the two riders got together early in the main in a crash that I didn’t see as anything but a racing incident. Later on in the race they met again with Seely taking Anderson wide and brake checking the rider before taking off. This didn’t sit well with Jason and, by all accounts, he tuned Cole up on the last lap in the turn after the whoops.

“Looking forward to a better weekend in Daytona! Hoping to leave the incidents that happened in Atlanta in the past. Yeah I was wrong in what I did, but the other guy wasn’t innocent we both let the egos get the best of us. Also as far as people talking about my riding. This weekend was the first incident all year that left someone on the ground. The only other incident that people could call questionable was with Brayton in San Diego heat race.

“With that said my intentions are never to put someone on the ground. Yeah I’ll bump you cause I don’t work my ass off all week to just sit around and wait to pass you… My goal is to move forward as quick as possible and I don’t want to knock people down but I will be aggressive. At the end of the day I and all my competitors pour our hearts into doing good so obviously not everyone is gonna get along. Also I guarantee there are gonna be nights where I’m riding like shit and people have to be aggressive to get by me… It’s racing!”

Honda complained to the FIM after the race, but was told there would be no action taken and the riders would have to work it out themselves. So I guess we’ll see some sort of rollerball action out there this weekend, as both riders have had numerous run-in’s with each other and they’re both about the same speed at that! I’m thinking that the FIM might want to rethink their approach and pull both riders aside before the show starts in Daytona and tell them to cool it before this gets a little silly. Keep an eye on these two as we move along in the series though.

“I felt great. I had a full week in Charlotte riding at Club MX. I think that made the difference,” Justin Brayton told me after a season high fifth place for him in Atlanta. “The past couple weeks I hadn’t been riding that much. Been transitioning to the east coast. I feel like I’m back on track and maybe get a podium. But I’m going to enjoy the first top five of the year.”

Brayton had a horrible 2015 with injuries, adaptation to a new bike and some other issues. He’s feeling better than ever this year and remember in 2014 he was winning heat races and getting on the box here and there. If you want a sneaky good guy who could surprise in the coming weeks, think about the #10 on the orange bike.