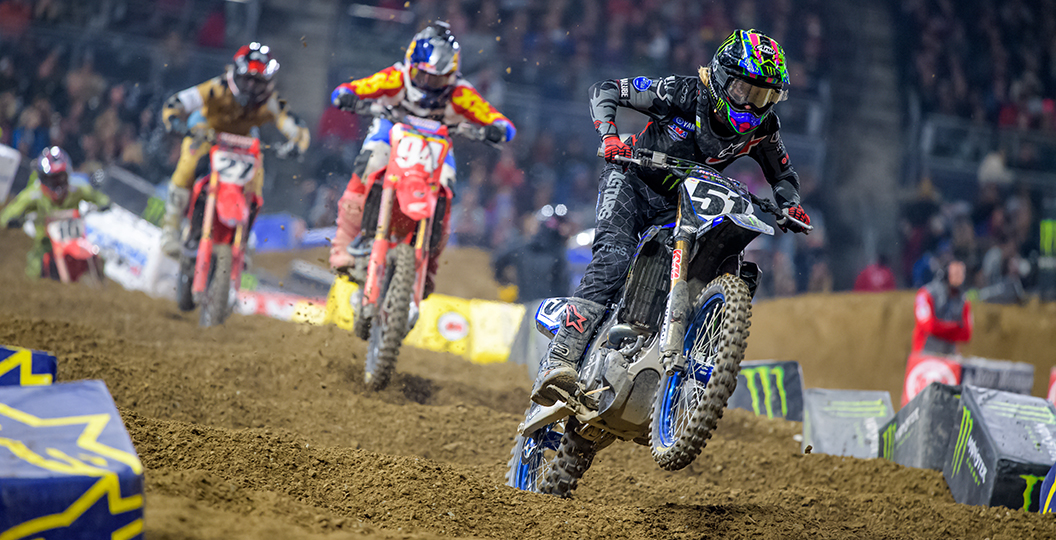 Matthes on: The Drama

The sixth round of 2020 Monster Energy Supercross, San Diego, was spicy! Tensions are getting ratcheted up a bit now that we are six rounds into the current campaign. Let’s break this down and award some rivalry points, yeah?

These two guys have spent a lot of time together and Justin Barcia really helped put Millsaps Training Facility (MTF) on the map before leaving while Marty still rode there. Something happened a couple of weeks ago that I didn’t see but Marty put it this way: “I was doing my fast lap and he happened to come up. He gained on me, went through the finish line, just threw the bike at me, revved the bike and hit me through the mechanics area. It’s practice, man. What is your deal?”

This move pissed Davalos off enough to where he remembered it and he took his chance to cross-jump Barcia over a triple on press day in San Diego. You cannot mess with someone like Bam Bam like that – he is a pro. Barcia checked up, headed to the exit of the turn after the triple and knocked Marty down with precise placement of his rear wheel. It was amazing and truly an art form. That got them nose-to-nose afterwards with Davalos appearing to be the aggressor with Barcia had his hands up in the proclaiming innocence.

“I didn’t create it. It all started a few weeks back. I’ve never been known for an aggressive rider. It’s my rookie season. I’m learning and I just want to have fun. I’m not going for the championship. I got nothing to do with them guys. Barcia just thinks he can do whatever he wants with whoever he wants. It don’t roll like that with me. I’m thirty-three, dude. I’ve been around this sport for a while and I’m not going to take shit from anybody,” a heated Davalos told me after Saturday’s main event. “If you are going to play dirty with me, I’m going to come back. I’ll come out after the race and beat you up. I don’t use the motorcycle to hurt you because it’s dangerous. If you got a problem with me, just come and find me.”

Barcia for his part has mastered the, “Me?” act from his numerous encounters over the years. “It’s awkward because we live in the same neighbourhood,” he told me afterwards. “Probably going to be on lots of flights together. I just think that he was not riding that cool with me in practice the last couple weekends. I felt like he was doing stuff intentional to me. It probably got blown out of proportion. Then I felt like he cross-jumped me a couple times yesterday. Then I stood him up and he fell down.” Who is here for Marty trying to run Justin down one morning when he puts the garbage out?

Heat Index: A 7 out of 10 because while Marty seems upset, it was just a move that Justin did in qualifying and didn’t hurt anything. Plus Justin’s ambivalence towards the whole thing makes it seem like this will cool down. Still, I love that Marty said he would take any fights out “to the street.”

Tomac caught Barcia around halfway in the main event and squeezed by Barcia before the finish line. It was a hard enough pass that neither rider could jump the finish line. Many riders have told that the key to passing Barcia is that once you make the move, you have to ride your balls off to get away because he will come and get you!

Well, Eli didn’t do that and Barcia went hard at the Kawasaki rider a few turns later and rammed him. That didn’t really work (and hw knew it wouldn’t) but Barcia did sneak under Tomac a couple of turns later. It was good hard racing by the two of them with Tomac eventually getting by but Barcia trailed right behind him the whole race.

Afterwards they had words and I asked Justin about that as well. “I was like, ‘You drove in on me pretty hard.’ He ripped my jersey and gave me some cherries on my arm. I was like, ‘That was kind of aggressive.’ He was like, ‘I could have hit you harder.’ I was like, ‘That’s true.’ You always could hit someone harder. No big deal. Move on from that. I’m not holding grudges anymore. It’s not fun,” Barcia said. Again, you cannot rattle the cage of a guy who’s spent his life rattling other people’s cages.

Heat Index: Ehhh, a 5 out of 10 because Tomac has got more important things to do than even the score with Barcia and I think, upon re-watching it, that Eli will see that he actually started it with a semi-hard pass on Barcia. You gotta know who you are dealing with, right?

Early on in the main event Anderson hit Brayton pretty good in a left-hand corner. It was enough contact that the #10 got sent off the track. Anderson carried on his way whilst Brayton rode alongside the rhythm section and then doubled in at the end and absolutely teed off on Anderson as he exited the turn. It was pretty good and definitely way harsher than what Anderson did to him. It also earned Justin a trip to the AMA truck, where he was reprimanded.

For Brayton, Anderson is a guy who he has encountered before out there and usually comes out on the losing end. This move was a few years in the making. “He blasted me off the track where pretty much no passing is made. It’s an off-camber and he just went straight right into me and I went off the track. Then the next turn I went in and he actually cut down kind of into me, but I was going inside. That was that,” said Brayton afterwards.

“The biggest thing is you just need track position now. I can’t let him pass me and then that’s another position. Then you get stuck just behind guys. Especially then, I was in the fray of five or six guys. I’m like, ‘I got to go.’ I knew if one more guy passed me it’s just another guy that I have to pass later or another guy who I have got to eat roost from. I was trying to move forward as well.”

Heat Index: I’ll give this one an 8 out of 10 because Anderson will remember and get Justin back at some point. I know Jason posted on his Instagram that it was all good but I’m not sure I’m buying that. We’ll see, this could be an indication of whether Anderson has changed his ways a bit. Count me as skeptical so I say Brayton needs to keep his head on a swivel.