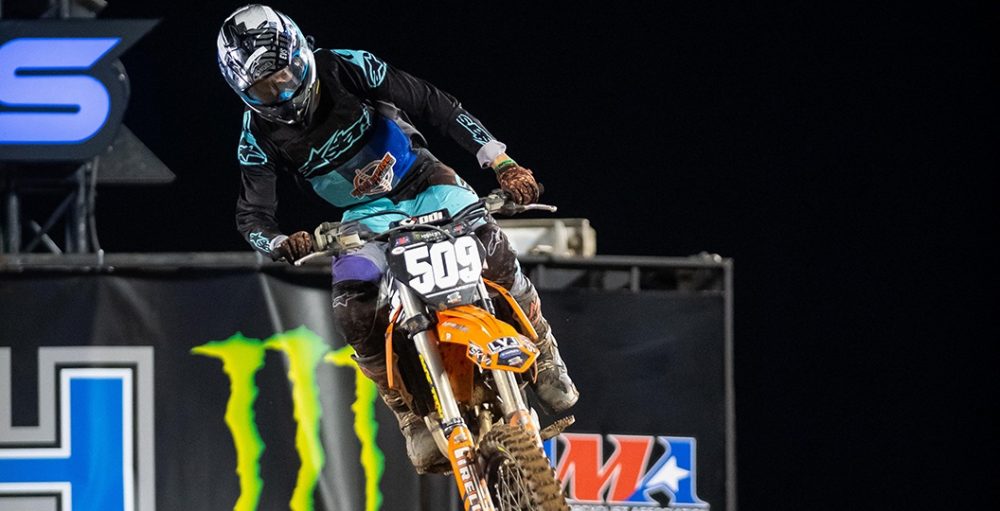 There are a lot of cool stories in the pits in the course of a year of Monster Energy Supercross but let’s face it, these days with COVID-19 still affecting everything, things still suck. Although the racing in Orlando was cool, in terms of some fans being there, it’s still not supercross, you know?

In Orlando, we had a cool story going on though. Privateer Alex Nagy made his first ever main event via his third in the 250SX LCQ. Nagy is a privateers privateer, you know? There are guys that are what you would call privateers but they are on teams and sometimes have expenses covered – some guys get everything paid for but not factory help at all and we still call them privateers. The word “privateer” has changed a ton over the years for sure, but there is one thing that’s not in doubt and that’s that Alex Nagy is a privateer.

Nagy had lined up for 132 races and had made 118 night shows, most of them in the 450SX class. The 250SX East series has been wrecked with injuries so that definitely helped Nagy’s case, but he’s also been riding very well. In Orlando, we saw history!

“I honestly haven’t even kept track of how many night shows or how long,” Nagy told us after the race. “My first year of racing supercross was in 2013, and I did that on a 250. Then every year after, I’ve been in the 450SX class. This is kind of like my first time back in the 250SX class. I’m glad I was finally able to capitalise on a good coast to ride and be able to put it in the main finally.”

Look, once he made the main the rest was gravy, right? Nagy rode pretty well in the 15-minute main event though to end up with a fifteenth on the night. That’s pretty decent for a guy who’s not used to racing that long. Nagy got six points toward ditching his three-digit number and getting one of those two digits that the cool guys get.

Surely Nagy was going to reward himself with some sort of extravagance for his efforts, right?

“Honestly, it sucked. It was cold waking up in the morning. Then when you are kind of cold and then you’ve got to put cold clothes on or cold gear on, that was rough. Like I always say, you don’t even really think about it. It’s just in the past.”

Nagy spending the time in freezing cold Indianapolis sleeping in his van for rounds four through six is next level. Hey, he loves the sport and it shows!

This is a part of the issue I have with the MXGP series. Yes, there are wildcards out there that some riders can get but it’s not easy to show up at an MXGP and race like it is for riders over here in SX and MX. That’s one of the things, in my opinion, that make motocross great. A guy can get a bike, modify it a bit and line up with the world’s greatest riders. Talent is the separator, not money spent. Nagy has spent time riding in the winter down in California but unfortunately not this year. His program is, how we say, pretty loose!

“I didn’t even have an off-season because I was in Illinois the whole time. All I did was ride. I would ride with a track that was half snow, and then two jumps of dirt. That was all I did. I wasn’t in California. This was the least prepared I’ve been going into a year, and I did the first round on a 450 and was able to get in on it which was sweet. I was stoked on that, to make the night show.

“Then I wanted to do a 250 the whole time, but I didn’t get the bike that I’m riding until the night that I left for Houston. I pretty much just had a brand new 250. I’m like, ‘Okay, I’ll race the 450 at the first one and then switch the suspension over.’ I broke the bike in in the parking lot. The first time it ever saw dirt was the practice at Houston 2, which is pretty funny.”

The thing about that is he broke the bike in around the pits and he hadn’t ridden the bike on a track until the first practice at Houston 2! The bike had stock bars, stock grips, a stock head pipe and suspension modified last year. Yet, somehow, five rounds later he’s in the main!

Nagy’s now going to race the much-more competitive 450SX class while the 250SX East series is on hold and I don’t like his chances to make the main there. However, Alex Nagy will be out there sleeping where he can and practicing where he can. Nagy’s enjoying his life and now he’s got that main event on his record. We need more Alex Nagy’s in the pits.