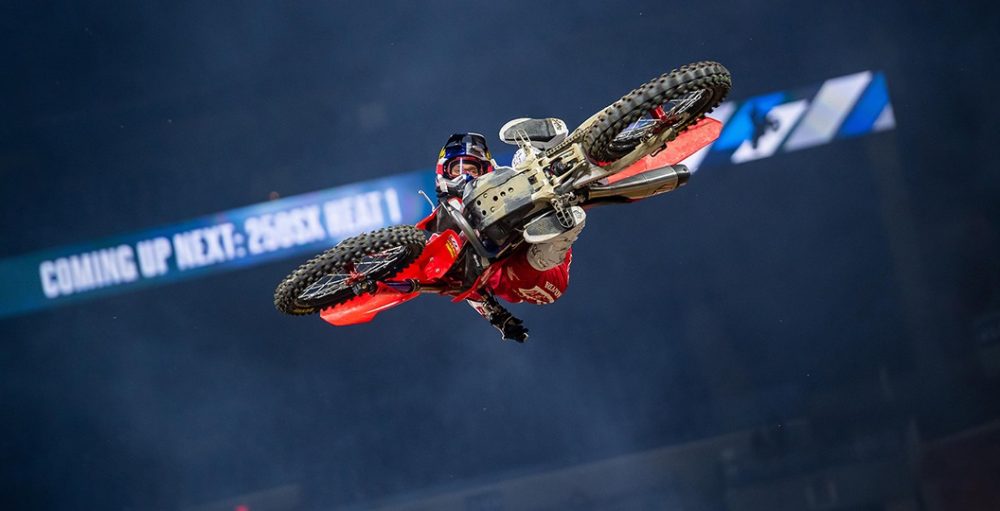 It’s not too hard to imagine that, although Honda HRC’s Ken Roczen just grabbed his second win in a row in the 2021 Monster Energy Supercross series, he should actually have four wins. He passed Houston 1 winner Justin Barcia a couple of times in the first main of the year and, of course, we all know that lapper Dean Wilson cost him another win.

It’s not a stretch to imagine Roczen with four wins out of five races to start the season and his current points lead being even bigger, right? He has been amazing and on it right from the first round and it’s cool to see; having Roczen healthy, happy and fast in SX is a good thing for the sport.

One of the things I was wrong about, and boy there’s a lot, was Kenny’s adaption to the all-new 2021 Honda CRF450R. The bike barely shares anything with the 2020 model and I’ve seen plenty of riders and teams at the highest levels struggle to figure out new models. The most recent Kawasaki, for example, wasn’t easy for Eli Tomac and the Team Green guys to get a handle on right away. The 2009 Honda. The backwards-motor Yamaha – there could be a book written about trying to get that bike set-up and working right.

The point is that with data acquisition teams are able to get improvements done to the bike but it usually takes a year. Then of course parts and 2021 Honda 450 bikes themselves were late getting to the USA only adding to my thought that this might be a year where the team and Roczen are constantly learning. The fact that Tim Gajser was on it all last year in the MXGP’s probably helped a bit but SX is quite a bit different from MX as we all know.

We had Roczen on the PulpMX Show on Monday and I asked him about the bike.

“There’s always little things that could be better, but I think ultimately it comes down to the stock bike has to be good from the get-go to be able to start off and not have huge problems,” Roczen said. “Our previous bike was not quite like that – it was a very difficult bike to set up, especially for all different kinds of conditions. We are in a super good spot.

“My bike is very raceable, especially in the conditions that we have had. It’s been rough. It’s been rutty and tacky. I think it will just be that much better even when it gets a little bit more hard-packed. I think we have had the most difficult conditions. I think everybody would agree with that. We are just solid.”

Honda’s had former SX/MX winner Trey Canard aboard to help with the testing the last couple of years and there’s no doubt that he has been a huge help to the team as far as getting a base set-up down so that the team does not waste a lot of time with Roczen testing. He’s able to just focus on himself.

“I’ve said this a few times; this bike is not a revolutionary bike. Honda has done this in the past with big steps like the dual mufflers or the aluminium frame and, although this bike is different, it’s not so different from the previous model. We were never so far off with this bike; it was pretty good the first day we rode SX. We could race it like this. It gave us a good head start on things

The biggest thing for me is there is less rigidity in this frame. At the end of the mains when the ruts are choppy and bumpy, you have to be perfect. This bike makes a difference and the rider can sustain a hard effort. These guys are going fast the whole time. The power is also more usable in more ways.”

The new “thing” for the factory teams is having someone like Canard, or Ryan Morais at KTM, who is still a great rider, knows how a bike works and can eliminate some directions that the team wants to try. I’ve been there as a mechanic and spent some long days at the test track trying clamps, bearing races, cams, pistons etc. and trying to get through what works and what doesn’t. The riders themselves don’t really enjoy those days. The quicker you can get the testing over, the better. The riders can then focus on putting in laps and getting themselves ready for the season.

“I think the last three years, I’ve learned a lot. At first we would come up with something and he [Roczen] didn’t like it or he didn’t win. The wins for me as a test rider were hit and miss. I’ve gotten to know him better,” Canard says about specifically testing for Roczen.

Yeah, maybe I was off on my take of him figuring out a new bike or maybe Canard has been such a massive help that they have overcome those usual new bike blues. Either way, Roczen looks as good as ever here to start the series. I wondered if Canard himself was surprised at how good the #94 and the new Honda 450 look so far?

“I’m not surprised at how good he looks. The last year and a half, his health has been a struggle. Even the races he did win, it seemed to me he wasn’t happy with the way he rode. He came a long ways since we started SX – we started a bit late due to the nationals going longer. When he took that time off this past summer, I got a sense he would get things sorted and he did.”

That’s the understatement of 2021 so far.