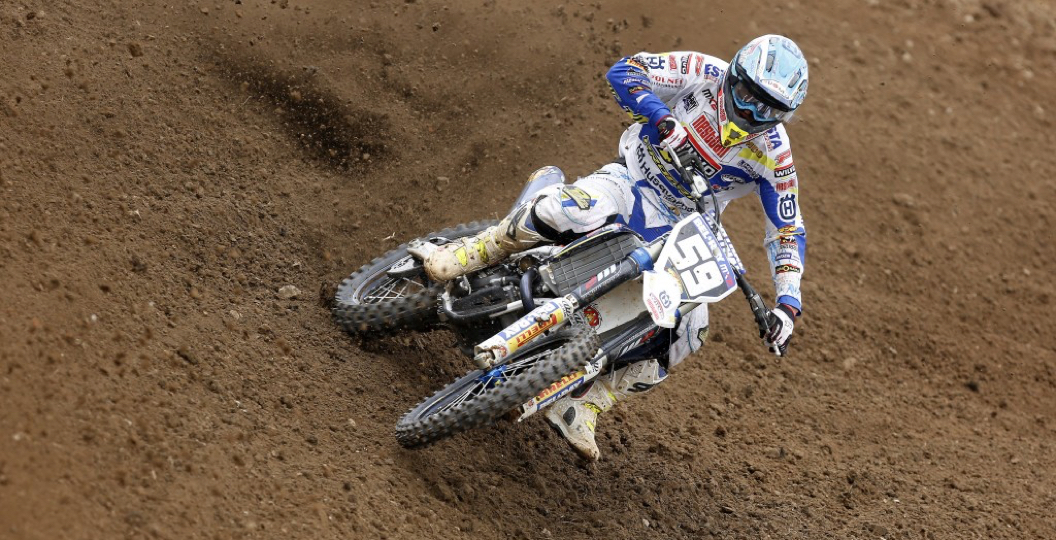 At the end of one of the most unpredictable and drama-filed GPs of the year, Husqvarna Motorcycles’ official riders earned race wins and career first overall podium result while Max Nagl extended his MXGP championship lead at the GP of Italy.

With heavy overnight rain turning the iconic hillside track into a battleground, MXGP championship leader Max Nagl endured an up-and-down GP of Italy. Winning his qualifying race on Saturday, the German started moto one looking for a repeat result. But with his start gate bouncing back up a near crash and mid-pack start saw the German with considerable work to do. Taken off the track and crashing soon after, Max was forced to pit for new goggles and adjustment to his bike before charging his way to an eventual 15th place finish.

Blasting his way to an impressive holeshot in moto two, Nagl looked to be headed for a race win. Leading lap-after-lap with only Kevin Strijbos able to match his pace, on the very last lap Max went off line, into the mud, and dropped to the runner-up position. Bitterly disappointed at having not taken the win, Nagl nevertheless ended the GP of Italy having extended his championship advantage, and now sits 30 points ahead in the MXGP class standings.

For IceOne Red Bull Husqvarna Factory Racing’s Todd Waters the GP of Italy will long be remembered as the race at which the Australian claimed a career first podium result. Third overall following fourth place results in each of the two MXGP motos, Todd showed exactly the type of form he’s been working so hard to regain following the broken leg that sidelined him during 2014.

Wilvo Nestaan Husqvarna Factory Racing’s Aleksandr Tonkov delivered a faultless performance in MX2 moto one. Leading from start-to-finish the FC250 mounted racer powered his way to a well-deserved first ever GP career win. Looking to repeat his winning ride in the second moto, Tonkov came close to claiming the holeshot before being pulled wide exiting the first turn. Shortly after a coming together with Pauls Jonass saw Tonkov drop to 12th. Eventually finishing eighth, he now sits just four points off second in the MX2 championship standings.

Due to illness Wilvo Nestaan’s Dean Ferris was forced to miss the GP of Italy.

The 2015 MXGP series continues on June 21st with the GP of Germany, at Teutschenthal

Todd Waters: “This is a huge result for me and the team. We worked really hard during the two weeks prior to this race, and I guess it paid off. I love racing in the mud, the conditions certainly didn’t faze me. To finish third overall is an amazing feeling. I felt good all the way through the first moto. I moved up from seventh or eighth to fourth, which was good. But I felt like I should have done better with the way I was racing. I wanted more from the second moto, and was third when I dropped it. The team told me a podium result was on about three quarters of the way though the race, so I went for it. I gave it everything and to get third is amazing. I have to say thanks to the team and my mechanics, it’s awesome.”

Max Nagl: “I’m disappointed because I should have got better results in both races. In the first moto I almost crashed at the start. My gate dropped ok, but then bounced back up as I went. I got up to about 10th without too many problems but that wasn’t where I wanted to be. Then I got taken out by Bobryshev. I had to come into the Pit area, change my goggles and get my bike worked on. I think I was there for around 25 seconds. 15th wasn’t the result I was hoping for. I used a different gate for the second moto and got a great jump, and lead the race. I lead all moto until the last lap, when I went off line in a corner and into the mud. I’m so disappointed because I should have won the race. But I will take all of this into my home GP next weekend.”

Aleksandr Tonkov: “Of course getting my first ever GP race win is a great feeling. It was a challenging GP, but I feel like in the first race I rode well. I started well, hand a big lead at one point, and controlled the race like I wanted. It was really easy to make mistakes but I didn’t make any, which I was pleased with. Getting the win was great. In the second moto someone clipped my right hand in the first turn and took me into the mud. I was pretty mad because the start was mine. I pushed hard and came together with Jonass. I feel bad about the pass, it was my mistake that took us both down. I got way more traction than I was expecting and came into the corner too fast. After that, with mud on my hands, it was hard. But the championship is really close now, I’m only a few points from second. We have made some good improvements and I hope I can keep things going in a good way in Germany next weekend.”