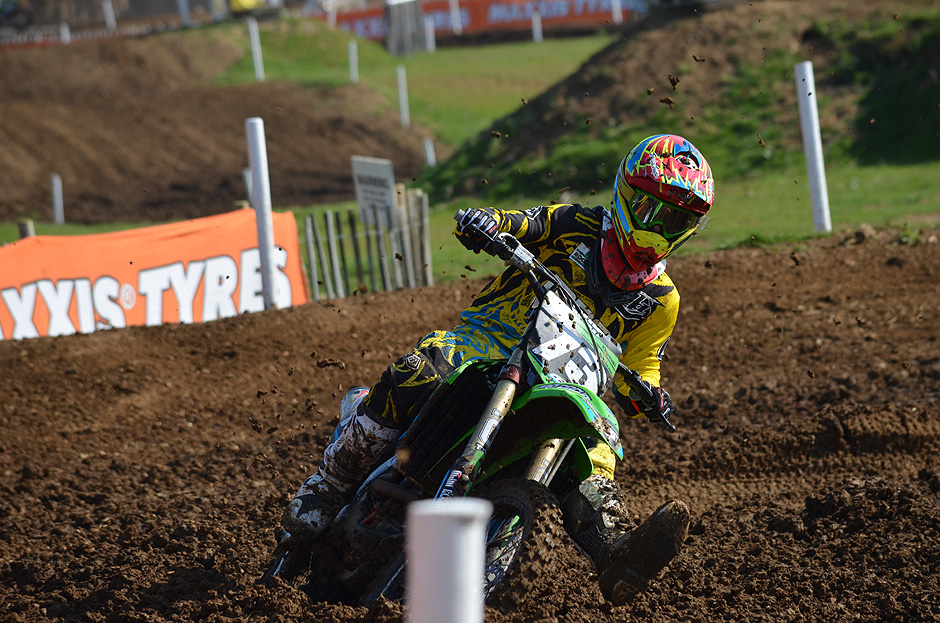 Milton Malsor is one of the local tracks to us so Luke was keen to do well. Having worked hard in the run up to the race he felt ready to do the business and was desperate to crack into the top 15 which we all know he is more than capable of doing.

Having arrived at the track the ACU had done a much better job than last year, the ground was looking good and the prep work was certainly moving in the right direction. The sun was out and it looked like it was going to be a hot weekend, very important to make sure that race prep was right and enough fluids taken on board.

Luke went out looking very confident, free practice went well where Luke was settling into the track. Timed practice started and Luke found that he had a lot of riders around him making it difficult to put in a clear lap. Luke managed to get a couple of flyers which put him into 17th place, he was pleased with this but still felt that he could have gone even faster had he managed to get a fully clear lap. A good start none the less and a good choice of gate going into the races.

The race format for the weekend meant that only the top 20 overall in the MX2 and MX1 groups would go through to the 30 minute super final instead of having race 3 so Luke was keen to get through into this.

Luke got off the line well and pushed into the first corner around mid pack, not ideal but not as bad as before. Luke was pushing on but didn’t seem to be making much progress, he was slowly moving up and picking off riders but seemed to lack that hard fight that he showed at the previous round. Luke came across the line in 21st place just one place away from the points. Luke was disappointed but just felt that both he and the bike had nothing to give. Luke seemed to be struggling with the heat so it was important to make sure that he kept cool before the next race.

Luke got over the gate really well but was completely cut off by another rider which halted any chance of getting into the corner in a reasonable position. This meant that he had some hard work to do.

Luke pushed through and was making some really good progress, he looked like he wanted to be higher and managed to get inside the top 20. A couple of riders went down in front of him which put Luke up to 17th at about half distance. He was going well but was unfortunately being caught by a few riders behind him. Luke seemed to hit a brick wall and 6 riders got past pushing him back into 23rd place. This is where he finished which meant that he would not be going to do race 3 as he had not managed to get into the top 20. Luke was very disappointed but worse he was on the verge of collapsing, he had pushed really hard but was overcome by the heat, we spent a while cooling Luke down and pouring water over him, eventually he managed to cool down which was a relief.

Whilst we don’t like having weekends like this we always try to take something positive away from it. We need to make sure that Luke is better prepared in the heat with both food and fluids, unfortunately in this country we do not have many hot races so they are a bit of a shock to the system. Matt felt that the bike was not as competitive as it could be so was going back to the drawing board to see what could be improved.

We don’t have much time to get ready this week as Luke is riding at St Jean D’Angely, France where he is doing the first round of the European EMX250 Championship. This takes place at the same event as the French round of the World GP. We are all looking forward to going and especially as it will give us chance to catch up with Luke’s training partner during his 7 years at the Anstie Academy and good friend Max Anstie. It’s always great to see Max as he gives Luke so much encouragement and help which always makes a big difference.

Will let you know how it goes!