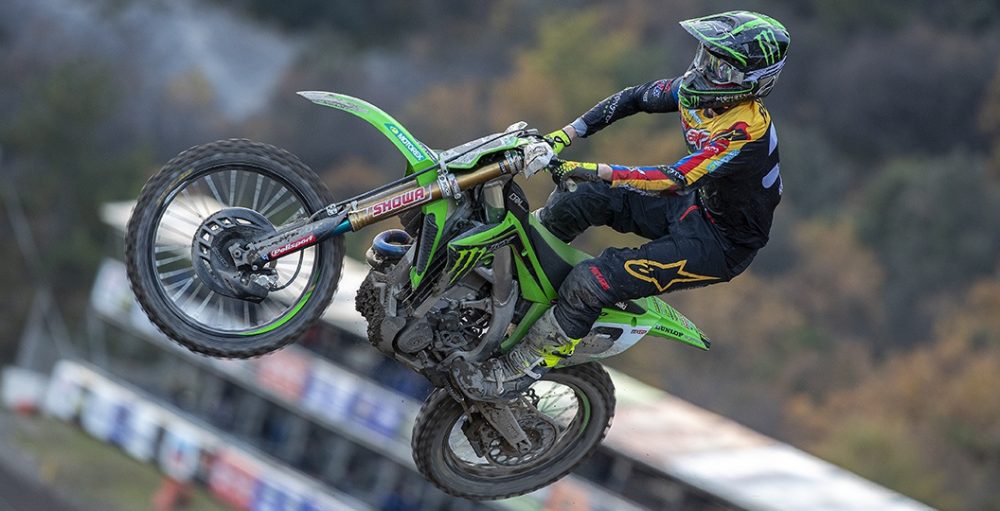 The 2020 FIM Motocross World Championship is now in the rear-view mirror, but that does not necessarily mean that everything is in place for the new season. A look at how the paddock is currently shaping up is below. The latest rumours are in the notes too, so this is a good tool to use to create an image of what to expect when the Grand Prix contingent hit Oman in April. EMX riders and teams have not been included in this, for clarity.

Note: No change to the premier-class portion of Red Bull KTM Factory Racing. Antonio Cairoli and Jorge Prado will continue to work with Claudio DeCarli – Jeffrey Herlings will be the sole 450F guy on Dirk Gruebel’s side.

Note: Mattia Guadagnini will sit beneath Claudio DeCarli’s side of the Red Bull KTM awning, so be teammates with Antonio Cairoli and Jorge Prado.

Note: No changes at the Hitachi KTM fuelled by Milwaukee squad going into the 2021 FIM Motocross World Championship. Adam Sterry will be at the team on a full-time basis next year.

Note: Alessandro Lupino has moved over from Gebben Van Venrooy Yamaha ahead of the new term. Lupino will be the only premier-class rider on Marchetti KTM. No word on their new MX2 rider yet.

Note: Shaun Simpson has confirmed that he is going to return to racing next year and compete in the full series – it seems that he will be the only rider under the SS24 banner.

Note: There was a chance that Jordi Tixier would add Benoit Paturel to his KTM team in 2021, but that will not happen now. Tixier may still add an EMX125 rider to his pop-up tent.

Note: It is thought that the MGR KTM team will run Iker Larranaga in MXGP again next year, but that is yet to be confirmed. All signs point in that direction though.

Note: KTM Racestore will continue to run Jan Pancar in MX2 at the European rounds of the FIM Motocross World Championship, so no change there. The team will also run Jacopo Fabbri in EMX250.

Note: It seems as though JD Gunnex KTM will return with a line-up that is similar to last year, although the team is one of the worst at communicating. Butron will race for KTM TRT when in Spain.

Note: WZ Racing KTM will make the step up to MX2 with Bastian Bogh Damm in 2021. Cato Nickel will ride for the team in EMX125 and Rasmus Pederson will be in EMX250. Mike Gwerder will also be in EMX250.

Note: False rumours are flying around that the team is trying to find a third guy, just in case Arminas Jasikonis is not ready to race. This will be the line-up for the team.

Note: Kay De Wolf will step up from EMX250 and take the seat vacated by Thomas Olsen. 2021 is going to mark the final season that Jed Beaton can spend in the MX2 class, so expect further changes in twelve months.

Note: Josh Gilbert is set to stick with PAR Homes Husqvarna. Callum Mitchell and Florian Miot will race in EMX250 for the team. Oh, RFX is no longer a title sponsor either.

Note: Anton Gole leaves JWR Honda Racing to start his own programme, with a lot of support from Moto Star (a Swedish shop) and Husqvarna Scandinavia.

Note: A new line-up at GASGAS Factory Racing. Pauls Jonass and Brian Bogers were both on Austrian machinery this season, so the change will not be too drastic for either guy.

Note: Simon Langenfelder will return for his second year in the MX2 class, whilst Isak Gifting will enter the class on a full-time basis. Jeremy Sydow has moved down to EMX250 with Hutten Metaal Yamaha.

Note: SM Action are moving to GASGAS machinery, following a lengthy relationship with Yamaha, and will focus on the MX2 class. Kevin Horgmo will contest EMX250 for them.

Note: Tim Gajser and Mitch Evans both signed multi-year extensions earlier this year, so Team HRC is going to look like this for quite a while.

Note: Alvin Ostlund is moving into the premier division, so Gianluca Facchetti is taking the second MX2 seat. Emil Weckman will compete in EMX250.

Note: Honda 114 Motorsports will run an all-new line-up in the 2021 FIM Motocross World Championship. Axel Louis will return to compete in EMX250.

Note: Both Anton Gole and Cornelius Tondel are out at JWR. Vsevolod Brylyakov returning is a surprising move, but he does belong in the Grand Prix paddock.

Note: Jacky Martens will have two new riders underneath his tent in his second year as an operation. Jacobi and Cervellin have both moved across from Yamaha teams.

Note: Monster Energy Yamaha Factory MXGP welcome two new guys for 2021. Glenn Coldenhoff is on a two-year deal, whereas Ben Watson is on a one-year deal. Jeremy Seewer will also be up at the end of 2021.

Note: Hostettler Yamaha will be new to the paddock next year and house a lot of Swiss talent. Arnaud Tonus explains more about the effort in this MX Vice interview.

Note: Finally! Ivo Monticelli has been named as the second Monster Energy KRT rider, so the team’s line-up has now been finalised.

Note: F&H Racing Kawasaki are big on developing talent, so it’s unlikely that they will ever make too many changes to their line-up. The same three riders will return next year.

Note: Steve Dixon will definitely run Wilson Todd in MX2 next year. A second MX2 guy is going to be announced soon too. Courtney Duncan is locked in for another run at the WMX title.

Note: The SDM Corse team has left Yamaha and transformed into the very first Beta Factory Racing team in motocross! Jeremy Van Horebeek and Jimmy Clochet will compete in the full campaign.