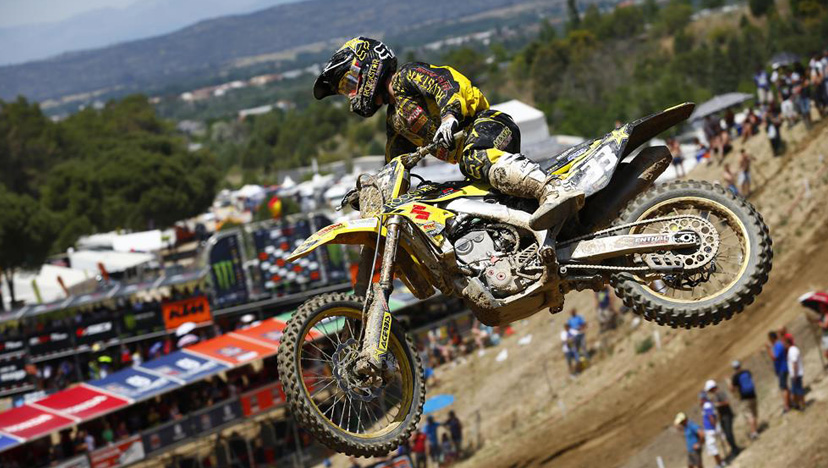 The Grand Prix of Spain brought the MX2 category of the FIM Motocross World Championship up to round seven of 18 and Rockstar Energy Suzuki Europe’s Julien Lieber again caught attention on the works RM-Z250 to score his highest moto finish of the season so far with sixth place in the opening foray at a packed Talavera de la Reina circuit.

The Belgian started brightly and showed some decent speed and commitment on a rough and slick soil. The numerous hills of Talavera contained a twisting and technically-challenging course. For the MX2 riders in particular the watering effect on the hard-pack meant varying levels of traction and grip, but 16,000 spectators found space and sheltered from the burning sun to absorb the racing.

Lieber’s positive run to sixth in Moto1 was not without drama as he made a few mistakes and even briefly hit the deck in the closing stages. The result still represented a continuance of the decent surge in form and confidence since an encouraging appearance at the Dutch GP seven days previously. The #‘33’ was luckless in the second moto as his getaway from the line – so crucial for ambitions of being at the top of the leaderboard – inhibited his progress. Trying to recover from a mid-pack slot, he ended-up crashing twice and reaching the chequered flag in 11th for eighth overall.

Team-mate Jeremy Seewer had a tough weekend and was one of many riders who struggled to get an effective flow at Talavera. The Swiss was 14th overall and could not count on effective starts nor heightened confidence on the track. The rookie posted a 16-13 scorecard and was mildly satisfied with an improvement in his form in the second sprint.

Rockstar Energy Suzuki Europe can now enjoy a rare break from international and national racing commitments before an extended run of meetings deep into the summer. Matterley Basin has been the home of the British Grand Prix for the last three years and will again host the FIM Motocross World Championship in two weeks-time for the eighth stop on the schedule.

“I started seventh in the first moto and my speed was good. I finished sixth, so the result was good but I lost concentration in the final laps, made mistakes; and had a small crash. So I wasn’t too happy with how the race ended. I didn’t make a decent start in the second moto and had another two crashes. The positive part of the weekend was my pace. The beginning of the season was pretty difficult but now it is coming and I hope it will continue to get better.”

“Yesterday in the morning I was feeling good but then I just lost the feeling I had in pre-qualification and was making a lot of mistakes. I had to take the other bike because of some problems and from that moment on my weekend went a bit downhill. Again I didn’t have the feeling in the first race and it was so wet. The conditions were the same for everyone but I need to get more practice on that type of slippery, watery terrain. I was not happy with 16th for sure. The next race was better than the first. It was still not really the results I wanted but I was pleased I could improve. One important point was my starts. I could not make them happen and had some bad luck. Herlings took my line in one race and my path was full of mud. I will have my only free weekend now for something like three months! Then we will start to think about England.”