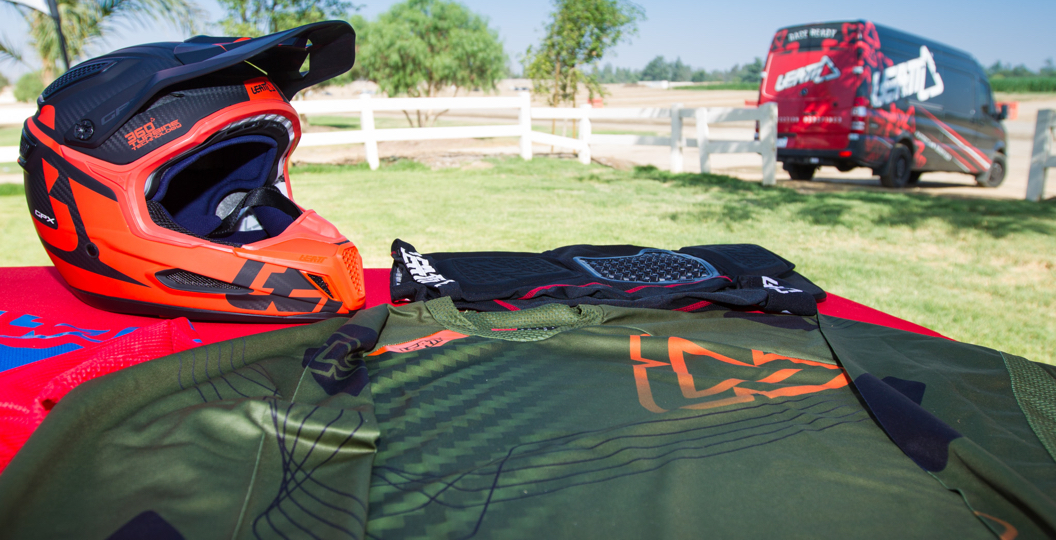 Deep in the endless information that you’ll find online about the 2017 line from Leatt, a brand that has made its way into the households of countless motocross fans worldwide, it states that “Leatt never stops improving their neck protection with new lab-tested tech innovations.”

That may appear to be a fairly blanket statement, but it perfectly sums up a range that again pushes boundaries within the industry. We recently learnt all about that at the Mike Raahauge shooting range (a setting that drove home the safety aspect of the product) on the eve of the MXGP finale at Glen Helen.

A line as diverse as the one that Leatt have created needed an introduction at a location as grand as that as, for the first time, they are making a serious push into other areas of protection and giving the average fan more to think about. Not only does the range do that, it also challenges the way that have been taught to think in regard to helmet size. Intrigued? Everyone present was.

The most thought-provoking point to emerge from the hour-long presentation was that their testing revealed it was more effective to have a smaller helmet than a larger one. Starting off a piece about Leatt, a brand recognized across the globe for investing both time and money into neck protection, with a synopsis of helmets may seem perplexing to the casual reader, but the fact that they have further refined their GPX line to tackle the various industry heavyweights further confirms the direction in which the South African-based company is heading.

“It was a committed new direction for the brand,” commented the Todd Repsher. Todd, the general manager in the USA, continued that “that primarily came from the laboratory based in Cape Town. The focus was neck braces, so we were destroying a lot of helmets. They started learning other things. I think also, as a brand, you get into helmets and they are serious. They take a whole brand commitment, tremendous resources. We brought in a whole different team of product engineers with different expertise.”

The helmets boast various characteristics that would spark interest amongst consumers, such as turbines that harden upon impact. What are those exactly? The best way to sum up the feature is that the harder you fall, the better it works. It can reduce the impact by up to thirty percent, which is obviously a great deal. It is actually the first integration of that technology.

Rather than just tell us how effective the GPX helmets are, Repsher and his team also had various systems available that demonstrated just how well the products work. Then, shortly after, the Armougel gel that sits inside the gloves was showcased to the small crowd of international media. That sits in the glove to absorb energy and stiffens upon impact to offer “world-class protection.” It worked so well that Repsher simply wrapped the gel around his bare hand, hit it with a hammer and did not feel a thing! There must have been some kind of trick involved, right? Not at all.

The gear boasts similar levels of protection and innovation, based on which line you elect to pick up. The ‘5.5’ jersey is “very stretchy, light and features no stitching as the seams are taped and welded” for instance. It also boasts a stretchy collar to fit over protection, so obviously various different factors were taken into consideration when entering this area of the market.

The protection there obviously brings us back around to the neck braces, which are still the product that Leatt are known for worldwide. No matter your size or level, there is a product for you. It could be the extremely light carbon GPX 6.5 or the entry-level GPX 4.5 brace but, in a nutshell, what is it that makes these braces a product that those at the South-African lab believe in so much? In their own words, it is that “the semi-rigid chassis is adjustable enough to fit most riders’ body shape while the structure remains very rigid to help transmit energy during an impact.”

It is quite clear that was considered when also putting together the rest of the Leatt range and entering different markets, which is why it is worth believing in the brand as a whole. This is not an unknown name that is hoping to push some gear on you and make their name, it is a world leader just hoping to protect you even more than they have previously.