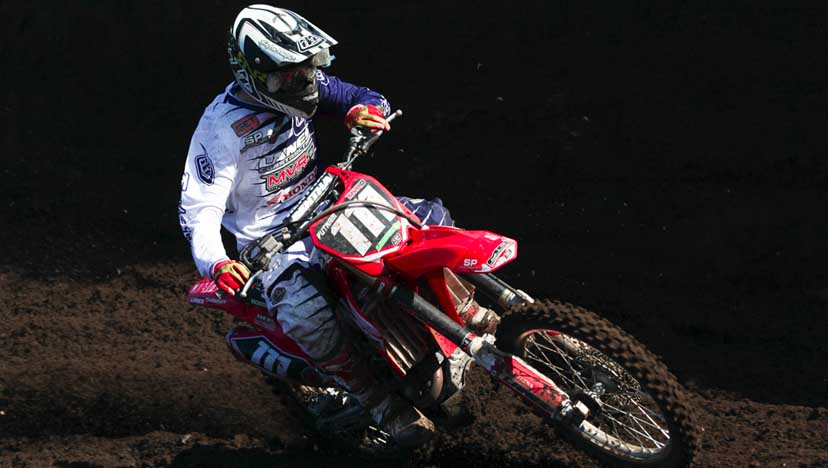 Lanes MVRD Honda made its proper season début at the GT Cup season opener at Mildenhall in Suffolk this past weekend. Armed with brand-new Honda CRF-250s, the trio of Scott Elderfield, Alfie Smith and Ben Putnam got their chance to qualify just before noon in bright sunshine; the end of the ten-minute session saw Elderfield claim pole, with Smith second and Putnam sixth.

For Putnam, the most junior of the three, the weekend’s racing showed that his leg injury at the British GP in 2013 has not had any detrimental effect on his speed. With one holeshot and several strong starts, he collected three sixth places and an eighth to end the weekend seventh overall.

Elderfield found himself battling against team colleague Smith and Carlton Husband all weekend long. Despite a front wheel puncture that ruled him out of the first race on Sunday, and plagued with arm pump, he still ended the weekend fifth overall with a win and two seconds

Smith arguably had the most interesting weekend of all. After proving that his skills on the smaller bike had not diminished with a great battle for the lead in the first race, he spectacularly went down in race two, only to remount and finish the race in fifth! Sunday’s races saw Smith collect second place in the first, and a win in the final. With three top three results, Smith took home the top spot on the weekend.

Lanes MVRD Honda now makes the trip to Landrake in Cornwall for the season opener of the Maxxis British Motocross Championship.

“Qualifying went well, we’ve just had brand-new bikes and they’re CRF-250s, and neither me nor Scott have ridden those in a year, so we had to go out there in the short qualifier to get used to the bikes, but Scott poled it and I was second, so we were both happy with that. In the first race I didn’t have the best of starts, but I came through, battling with Carlton Husband and Scott. It was a really good race between us, it came down to the last little bit but I won it, which was good for my confidence. In the second race, I was fourth or something, and then had a big crash and got run over. I was last and battled back to fifth or something. My lap times were good, so I was happy with that. In the third race I didn’t quite manage to chase down Carlton and he won that one, and in the last one, Scott and I pretty much went head to head and we had a real good race between us. It’s good practice for next weekend for the British championship, and I’m happy with the weekend.”

“The weekend went ok, I’m just trying to get a bit fitter and struggling with that, but it’s more being race fit than anything, getting ready for the British next week. Qualifying went ok, I got a good enough pick to get a good start, trying out these new holeshot devices, they’re working good and are a bit different and take some getting used to. I holeshotted one race, which was handy, the rest I didn’t get much better than sixth, a bit of bad luck but hopefully I’ll do better in the British.”

“Qualifying started off good, got pole, which is very unusual. The first race was going ok, I had a bit of a battle going on with Alfie Smith and ended second. The second race I got a good start and managed to get into the lead and led from there really and won it. The first race on Sunday started off not too good, I started off well but started getting a lot of arm pump, dropped back a bit and then got a front wheel puncture. The last race I got the holeshot, was leading it for a few laps before Alfie got me. I was struggling to hold on with arm pump, but it was a good consistent second in the last one.”

“The team’s done good, really. The boys were basically on stock bikes, because it’s just to get them into the groove for next weekend at Landrake, and for us to represent our sponsors at the GT Cup, but they’ve done well to be fair. Ben was solid and he will keep working on his riding and training that will only make him stronger and faster. Scott had a front wheel puncture in one of the races, which was a shame for the overall, but Alfie rode well. Scott’s a big lad, so it was more difficult for him, but overall it was a good weekend, and everyone’s fairly happy. ”