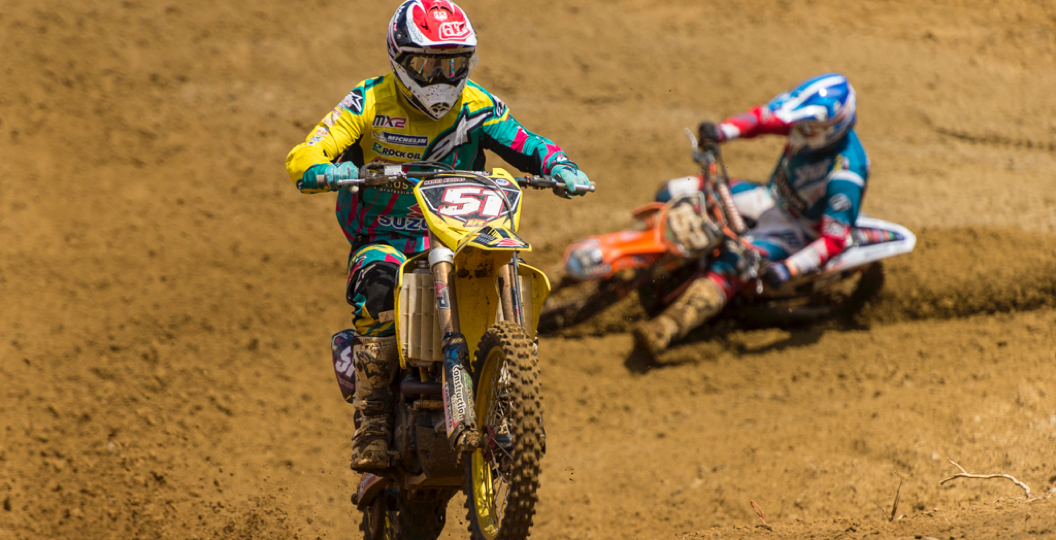 The third round of the British Championship took the Heads and All Threads Suzuki team to Canada Heights, where Harri Kullas and Graeme Irwin were aiming to make marked improvements on their results from the previous two rounds.

In MX2, Harri Kullas was full of confidence and showed his true form at Canada Heights after his top twenty results at the Valkenswaard GP, and 2nd overall at a French International. The young fin took the holeshot in race one and despite losing out to Max Anstie, he maintained 2nd place until the line. Battling for 3rd in race two, Kullas couldn’t quite make his pass stick and finished the moto in 4th. Despite another good start in the final race of the day, the difficult to pass track kept Kullas in 6th, but it was enough for him to step onto the podium for the first time with 3rd overall.

“The main thing was the starts, I was really happy that it was a dirt start instead of on the concrete. Last weekend at the GP of Valkenswaard was good, and I had a good result in France, the bike has been working really well. The first race was really good. I had a great start and managed to hold on to 2nd. The second race was another good start and I was in third, Petrov passed me, but I was still happy with my riding. I knew what I needed to do in the last race to get on the podium. The start wasn’t so good, but it was still just enough points to get a 3rd overall.

“I was really happy for the day, I got some good points for the championship. A little bit of luck maybe, but sometimes you need that, it’s just a good result for me, and all of the team.” — Harri Kullas, MX2, #51

Irwin, had an unfortunate incident in the two weeks prior to the event where the MX1 rider dislocated his shoulder. Not at 100% fitness he was still optimistic of getting a good result, but he was obviously suffering.  The day panned out with the MX1 riders struggling to make passes. In race one, Irwin gated in 6th and maintained the position for the entire twenty minute moto. Race two was restarted after ten minutes, and Irwin had already been giving 100%. Sapped of energy, and with a weak shoulder in the restart, he had a hard time climbing from 12th to cross the line in 10th.

The final race saw Irwin start in 8th and he managed make a pass into 7th, but was re-passed in the later stages of the moto to finish the day in 7th overall.

“My shoulder was weak obviously, but I think my riding was OK. It was a hard track to pass, so without making good starts and having a bad shoulder it wasn’t easy, especially for the restart in the second race. That’s kind of the story really, wherever you started was where you finished.” — Graeme Irwin, MX1, #5

“Harri got good starts and  just rode to his potential yesterday, that’s the bottom line really. That’s what we see from him through the week, and he’s finally showed at the British Championship how he can ride. If he can find that every time, we’ll see similar results every round.
Graeme was unfortunate to dislocate his shoulder a couple of week ago, so he wasn’t 100%, and all day the MX1 racing seemed to be where you started was where you finished. He was riding well, and realistically he salvaged good points considering his shoulder.” — Neil Prince, Team Manager