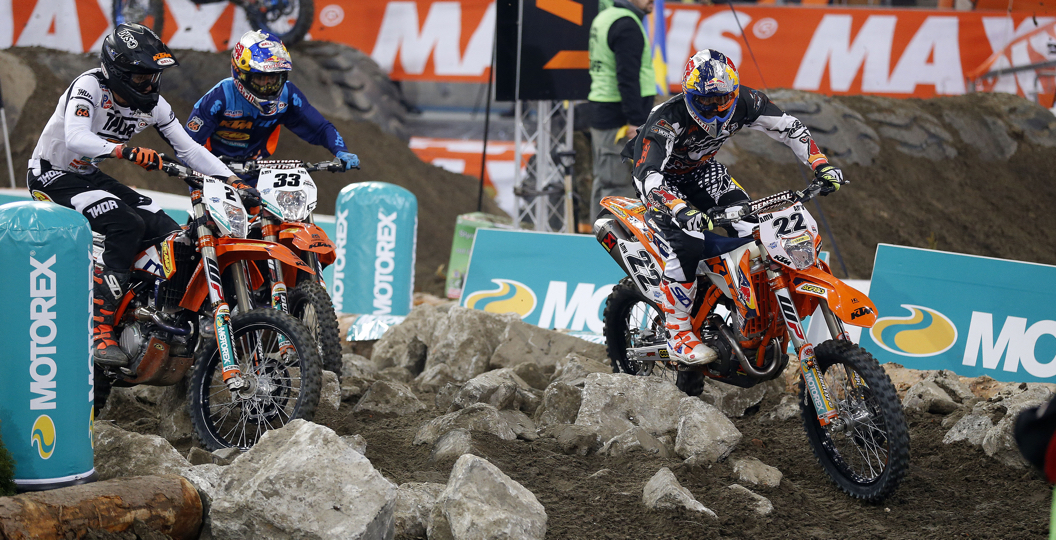 Orange was the dominant color at the end of an exciting night’s racing in Lodz, Poland when action got underway for the opening round of the 2016 FIM SuperEnduro World Championship. Victory went to KTM US rider and AMA EnduroCross Champion Cody Webb, second was Red Bull KTM factory rider Jonny Walker (GBR) and third place went to home favorite and fellow KTM factory rider Taddy Blazusiak.

Cody Webb was hot on the track and wrapped up the first final early in the evening. He finished sixth in the second final, which starts in reverse order, then had another convincing win in the third final to take the trophy.

Jonny Walker was the most consistent and often the fastest on the Polish track to be second in each of the three finals and registering the fastest lap in the first and second race. At the end of the night he conceded the victory to Webb by just one point, which reflected the fact that Webb had also won the SuperPole.

Third place went to Taddy Blazusiak, riding in front of a very enthusiastic hometown audience. The event in fact signaled a successful return to racing for the Polish rider who had missed the second half of the 2015 season suffering with the debilitating Epstein Barr virus.

Webb: “To come away from round one with the overall is just fantastic. Two wins and sixth was great. I really felt good out there tonight. The track was riding really fast but I had a good flow. Race one was near perfect. I got a decent start, followed Jonny and then got into the lead. Race two was just a bit of a lottery but then to win the final and take the overall capped off a great night.”

Walker: “It wasn’t the overall win I wanted but it was pretty close – only one point away. There wasn’t much in it between Cody and me at the end of the night. The goal was to be consistent. I wasn’t consistent at round one last year so I definitely feel like I turned things around tonight. Three second-place results were great, the SuperPole just cost me the top step of the podium but I can leave Poland happy and look forward to Germany.”

Blazusiak: “Tonight was just wild. I hit the ground hard a couple of times and really had to dig deep to pull something out of the bag. When I crashed off the start in race three I thought that was it, any chance of the podium was gone, but I didn’t give up and clawed my way back. That’s probably the hardest fought podium result I’ve ever got, so I’m pleased. After taking the summer off with illness, it’s good to be back on track. There are still some bits of my riding to build on but it’s coming back. My fitness didn’t fade so I’m pumped about that. There’s still a long way to go in this championship, that’s for sure.”

American rider Taylor Robert finished fifth, followed by Alfredo Gomez of Spain, who recently signed with the KTM Factory Racing Team. Seventh was USA’s Ty Tremaine, who has just moved up from the Junior Class, Swedish KTM rider Andreas Linusson was eighth and Paul Bolton of the UK was tenth to give KTM eight riders of the top ten places.

KTM was also successful in the Junior Class with Manuel Lettenbichler, teenage son of Andreas Lettenbichler picking up three decisive wins to finish off the night with a perfect 60-point scorecard.