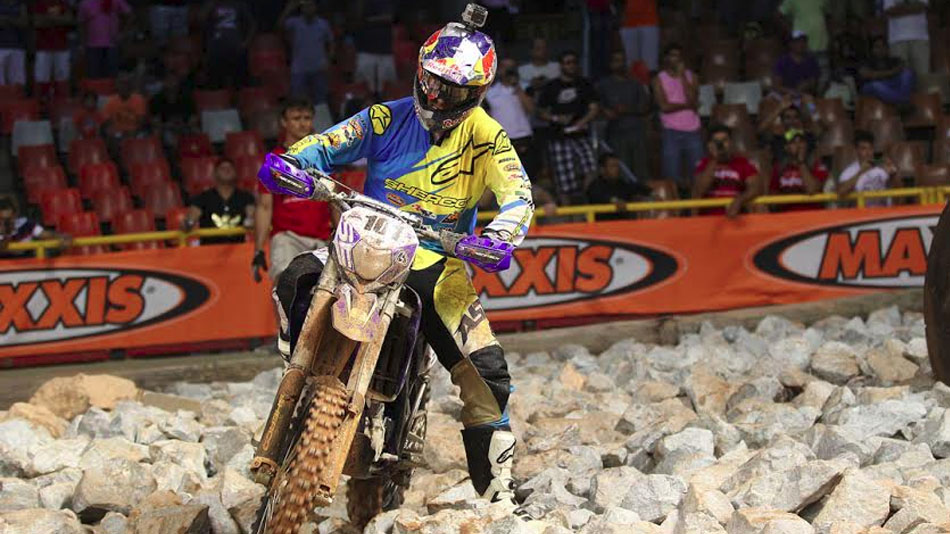 Knighter second at FIM Superenduro Round 3 in Brazil

Factory Sherco mounted David Knight finished a strong second in the latest round of the FIM Superenduro World Championship held in Belo Horizonte, Brazil on Saturday.

After winning the last time out in Poland, David was eager to continue his winning form. Second fastest in the super pole, was David’s strongest qualifying result of the season so far and he was looking forward to the races.

Race 1, and David started third, steadily making his way to the front and holding on for the majority of the race. Blazusiak, David’s main rival, rode a very strong race after a terrible start to come through and pass with a couple of laps to go. Second place, however, was a great start to the evening.

Race 2, and another good start from the second row by Knighter. David pushed through to second at the end of lap one and soon took the lead before opening a healthy gap. With the race in the bag, Knighter then got held up a lot in the final 2 laps when lapping slower riders. Going for the clear line in the final corner, Alfredo Gomez made a crazy move, jumping straight into Knighter knocking him down and falling himself. They both remounted and crossed the line with Gomez grabbing the win from a very angry Knight!

Race 3, and David made the holeshot and again led the pack, but Blazusiak was in a determined mood, riding on the very edge. Blazusiak eventually took the lead with Knighter following closely to finish seconds behind. By taking 3 second places, David was beaten to the overall win by Blazusiak by just 3 points. All in all a good solid night.

The race here in Brazil has been incredible with the amount of support I’ve had from the Brazilian fans, they are so passionate and it’s been a pleasure to race here. My night was good and I’m happy enough. I was very worried after I’d eaten lunch and I didn’t feel too well. During Race 1 I felt really sick and had no energy.

Race 2 was almost the perfect race until I lost a lot of time on the final lap getting through lapped riders and then Gomez made a very dirty move, wiping me out costing me the win. Luckily I still got second so still a good result.

Race 3 and I let Taddy past as I thought it better to pressure him from behind as I he was riding fast and ragged. He got away a little but then during the last 2 laps I closed him right in again but passing would be a different story. Again second but importantly I didn’t lose many points and that’s a good thing the way I was feeling. Hopefully I’ll feel better and can push harder in Mexico next Saturday.