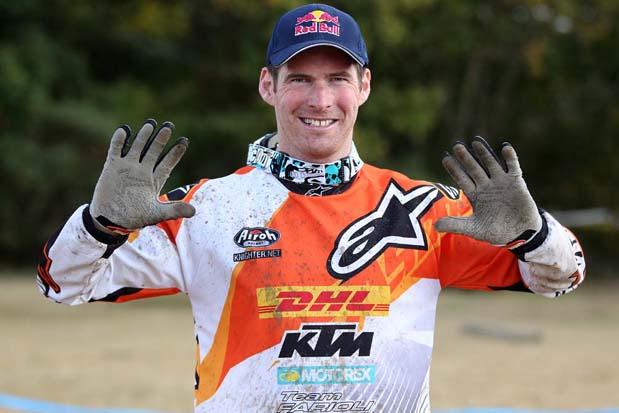 KTM Enduro Factory Team rider David Knight has secured an incredible 10th overall British Enduro Championship title following a double victory at the final round of the 2012 BEC series. Securing his first BEC title back in 1999, Knight has without question been the championship’s most dominant performer, only missing out on additional titles when competing in the Italian Enduro Championship in 2002 and in the US GNCC series in 2007 and 2008.

With Enduro World Championship commitments preventing him from racing the penultimate round of the BEC series, Knight could ill afford any mistakes at the final round. Winning each of the two days of competition comfortably, David enjoyed a near perfect weekend only beaten on one of the 13 special tests. Importantly the event offered a great workout on his return to racing from injury. Despite two tough days Knight suffered no ill effects from his recent stomach surgery.

David’s next event is the eighth and final round of the 2012 Enduro World Championship, in France.

David Knight: ‘It’s great to have claimed a 10th British Enduro Championship title. I was confident that I would win here this weekend but I had no back-­?up plan if things didn’t go to plan because I missed the fifth round of the series. I really needed everything to go well here, which it did. After a good first day I just needed a few points from day two, which I got. Getting a 10th BEC title means a lot to me, and over the years I’ve really enjoyed competing in the championship. It wasn’t a bad weekend at all this weekend. I really enjoyed the course. It wasn’t long, but doing so many laps made it hard work because it got really rough. The test was short, and got really rutted, so instead of being able to go absolutely flat out you were just focused on not making mistakes. It’s always the same with short tests. The first test on day one went well, and with a bit of an advantage I was able to relax and pick different lines, which meant I started going faster. Day two also went well with no problems at all. The other good thing is that I felt good, my stomach didn’t give me any problems. I know the final world championship race will be a lot tougher, but I’m looking forward to it. I hope I can bring the season to a positive end.’