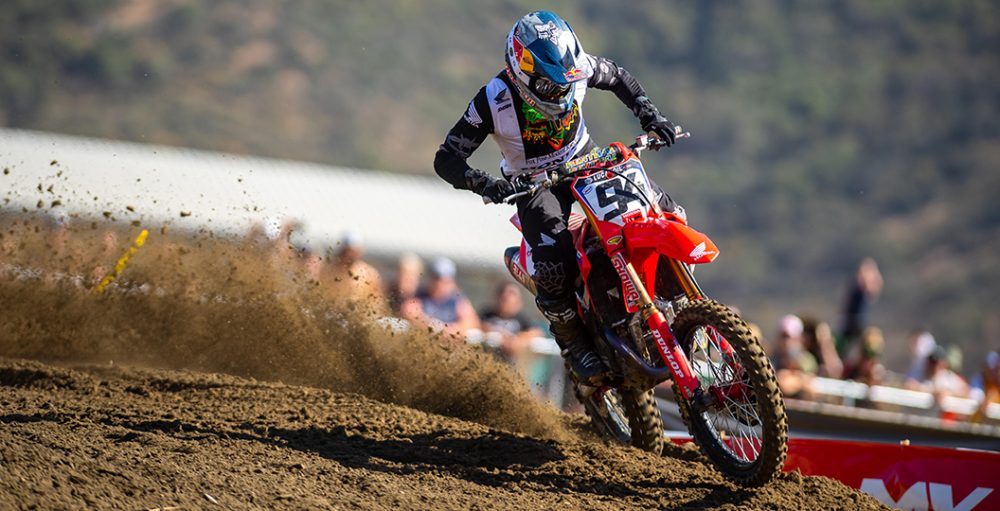 Ken Roczen dominated a lot of pre-race discussions heading into round one of 2021 Lucas Oil Pro Motocross, but for all the wrong reasons. Roczen, who usually radiates confidence, opened up about his lack of comfort and belief heading into the first round at Fox Raceway and had many questioning just how well he would perform. It was a bizarre stance from the two-time 450MX champion. Quotes like the following were certainly out of character.

“I wouldn’t say that I’m 100 percent just as in how good I have been in the past and how ready I have been,” Roczen said on Wednesday evening. “Obviously, I’ve mentioned that I feel like I have a little bit of a disconnect with motocross. Honestly, it’s really just the speed that it takes in motocross. It used to come super quick to me just because I used to race every outdoor season.”

Based on his assessment of himself, very few people had him pegged as a contender for the win heading into round one of twelve. That is exactly the position that he occupied though! Roczen rebounded from a sixth in moto one to win moto two in a dominant fashion and was awarded second overall for his efforts. Afterwards, he spoke with the media about his pre-season expectations and whether those have changed now that he has proven what he can do in the outdoors.

MX Vice: I mean, you said yourself that you were not sure how it was going to go. You were not feeling overly confident or comfortable in motocross, because it had been a while and you had not ridden it a lot. The speed of old was there though! Were you surprised with yourself today and how are you feeling now that you have two motos under your belt?

Ken Roczen: Yeah, totally. I think everybody probably struggled a little bit in practice. It was just really, really deep and wet. We were only really using like three feet of the track, so it was a little tough and I just started off a little shaky. We got it back together for the second practice and that put me in a good position for the first moto with gate pick. I had a pretty decent start in the first one, but I tangled a little bit with a couple of riders in the front. I was in a good position in the beginning to kind of make some moves. That’s what I did, but you know riding on a track like that I was just not really too comfortable. Not having raced motocross in a while either, I just rode a little tight and was not really going anywhere either.

At the same time, very late in the race I could put a move on Adam [Cianciarulo] in the last corner and I started going forward just a little bit. I tried to regroup for the second moto and grabbed a really good start with Aaron [Plessinger]. Yeah, like he said, we just kind of laid it down. I feel like I had some really good lines throughout the entire track. The track was really gnarly. You know, you have these ruts that are super soft but a lot of the track that we ride is hard-pack underneath. It gets some really sketchy ruts and square-edge bumps at the bottom of some of the jumps. I was really just riding as hard as I could for as long as I could, trying to keep the focus and not make mistakes.

There were a couple of sketchy moments – right by the finish line there was a rider down. I saw some yellow flags, but I didn’t see anybody. I just kind of jumped this little double and sure enough when I landed the bike was literally right in front of me. I was not even like to the edge of it where you could miss it easily, so I almost tangled right there. I got it back together and just kept charging all the way. I tried to look for lines and was just riding really wide-eyed. I was able to win that moto.

The two-lap board came out, which I was kind of surprised about. Maybe it was just because I was super focused? It came out and I was like, “Okay, here we go. We have got two laps to go.” We brought it home – it feels good. Like you guys said coming into this round, I was not really the old me yet. I could feel it in practice but at the same time I did not let it discourage me. At the same time though, I knew coming in that we had some things to work on. I want to learn from this weekend and keep it rolling.

“I wouldn’t say that I’m 100 percent just as in how good I have been in the past and how ready I have been.”

Yeah, kind of. I was a bit surprised, like I had no real expectations this weekend. I guess I appreciate that everybody else has such high… Not high hopes, but high expectations. Everybody always expects me to be up front and I guess that is a good thing, but nobody knows what is going on behind the scenes and how I feel about riding. Not to mention that Chase [Sexton] and I are on a new bike, so the testing side of things usually take a little bit of time as well.

After the first moto and, you know, struggling a little bit… It does feel familiar at the same time as well. I just knew that there was going to be a learning curve to this whole thing and all I wanted to do is get better each weekend.  We put ourselves in in a good position in the end though and I guess it just came back to me. It felt familiar being up there and on the track, like I said, I had some really good lines. I am expecting and hoping that we will just go uphill from here.

After the press conference on Wednesday, I was worried about you a little bit. You used the word disconnected. Do you feel more connected after today and more confident than you felt on Wednesday?

I don’t know. I’m kind of just taking it day-by-day and weekend-by-weekend. I want to continue working on myself – I feel like I have got more in the tank. I do not feel like I’m quite where I want to be. The only reason I said… Not the only reason, but supercross and outdoors are quite different especially when it comes to speed and finding a flow on the track. I was just really slow, honestly, compared to some of the other riders. I did not let that discourage me by any means – I just knew I had a lot of work ahead of me. I did not want to go into the season and say, “I want to go and get this overall and go 1-1.” Realistically, I felt like it would take me a little bit of time to get there.

Maybe for you guys it’s a little bit unusual? I guess there are other riders who have not ridden motocross in a while, but when I had time off last year I was hardly riding and really sat my butt down like I was supposed to. It was not like I was going out and spinning a bunch of laps whilst everybody was racing. We went straight back into supercross after that and I just felt like I lost a little bit of that special touch that I had before, so I’m just working on getting back there. I don’t know how long it will take – we have a couple of cool tracks coming up where I have done really good and that I enjoy.

I’m honestly just trying to enjoy myself and I feel like with that kind of fun comes good results. Like everybody else said as well, the field is so stacked that you know you could win one weekend and then be off the podium no problem the next weekend. We have got to continue getting good starts and putting ourselves in some good positions. The tracks are gnarly and that is another thing: You don’t get these kinds of tracks unless you are racing really. This was kind of a little bit of new territory again today, but I feel like I started getting more and more comfortable.

We want to put a little bit of work in on the bike as well as I feel like we can get a little bit better, but now I see that I still have something going on and I obviously still know how to ride. I want to get better each and every weekend really. I was a little worried too, but in a good way. It is so hard out there. The fun part is figuring out how to get to the top again. Sometimes it comes a little easier to you and sometimes it takes a while to find your stride.