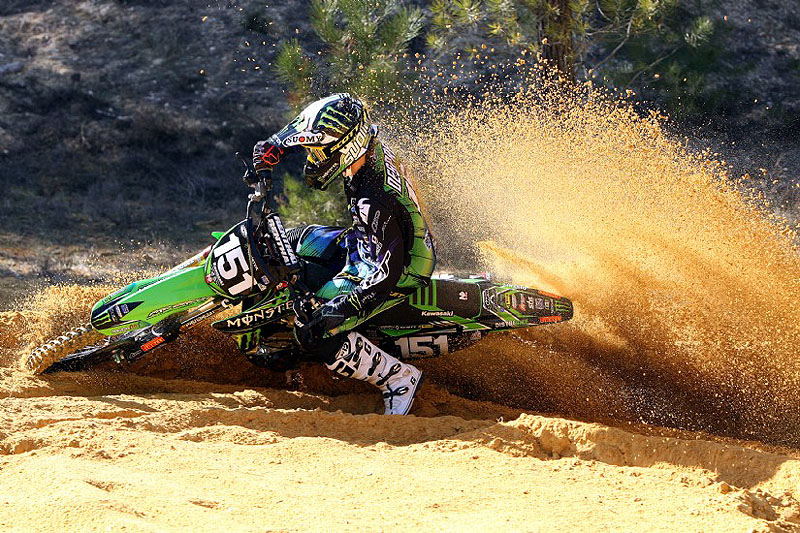 It’s fair to say that Kawasaki really have been working on their world program the last few years and it seems to be bearing fruit. In the UK they’ve stepped up their efforts with Maxxis/Henderson/LPE Kawasaki as the official racing team and Twisted 7 Kawasaki are now in charge of bringing the youth ‘Team Green’ program back to it’s former glory. Add to that the effort being made by Lanes and Oakleaf Kawasaki in the pro classes it’s clear of the green teams intent.

It’s certainly working for them over the English channel that’s for sure. Multiple race wins have been credited to Kawasaki motocross racing teams throughout the weekend. Currently Kawasaki are leading all the top French series!

The third round of the Elite series took place in Gueugnon. On this fast track Sébastien Pourcel confirmed that he’s back to his former top level as he has dominated all his rivals twice. Being the winner of the MX1 race and later the super final too, Sébastien is now leading the series with three more rounds to go.

Coming back to racing after his shoulder injury, Valentin Teillet (Rockstar Bud Racing Kawasaki) grabbed the overall MX2 win; having won the MX2 race, and being the best MX2 rider in the super final with a sixth place, Valentin is back in third position in the standings.

Maxime Desprey - he's got the funk and a funky name too!

Both racing near the smalltown village of Illats, David Herbreteau and Livia Lancelot scored a perfect triple win in their National series; David currently has a perfect score with six wins in a row, while
Livia confirms that she is still the fastest French woman.

Gautier Paulin (Kawasaki Racing Team) and Joel Roelants (Floride Monster Energy Kawasaki Pro Circuit) were both involved in Mill, for the fourth round of the Dutch series. When they arrived in Mill, they had to deal with a different kind of sand than in Heerde one week ago. They had to adjust the bike settings as the sandy layout was dry, fast and bumpy.
It was a perfect working day for both riders, who are now working very closely with their team after being four months together.

Taking third place in the first race, behind Bobryshev and Strijbos, Gautier was very strong in the second heat. He was only in twelfth position after one lap, but he came back to second, right behind Bobryshev after only a few laps. He rode smoothly and waited for the best moment to make a pass. Unfortunately, Gautier was then surprised by a backmarker and crashed. He lost precious time to restart, and shortly after he decided to retire.

Joel Roelants delivered another strong performance in the MX2 class; twice third, the Belgian will have a short break before the opening Grand Prix of the season, scheduled on Easter weekend.
Valentin Teillet: “I couldn’t train much since two weeks, because of my shoulder injury, but I didn’t lose much potential and felt comfortable on the bike. I must say that I’m used to having some injuries during the season, and I know how I can work even when I’m injured. With Jacky we did a great job, it was good to work with him for my reeducation as we have a good connection together. I was happy to be back on the bike, and in the MX2 heat I had a great start and led the entire period. After the start of the super final I crashed and another rider hit me. Then it was harder for me to ride. I had some pain but I came back sixth and that’s important for the championship. Now I will move to Belgium, because I need to ride on sandy tracks to prepare for the opening GP of the season.”

Maxime Desprey: “It’s great to have better results each weekend, and for the first time I’m leading the Elite series. I had a great start in second position during the MX2 heat, but Valentin was stronger; I tried to pass him during the opening laps, but it was impossible and then I decided to focus on my position. In the super final I rode behind Allier on a 450 the entire race; I tried to pass him several times but I was not aggressive enough and got a false rhythm. Anyway I was the second MX2 rider today and I’m now leading the series, which is great for us! I felt so comfortable on my KX250F Pro Circuit Kawasaki! We’ll continue to work hard this week. I want to defend my red plate in Ernée next weekend.”

Dylan Ferrandis: “I couldn’t train since Sommières, because of my knee injury; I was just able to practice twice. Physically I’m not at my best, and that was tough today. In the MX2 race I had a good start but I lost some positions when I stalled the engine in the second corner; I came back from seventh to fourth, put some pressure on Larrieu and finished third. I had another good start in the super final, but I crashed during the second circulation; another rider hit me, the bike was damaged but I never gave up and scored some points. That’s not enough for me, but physically it was tough.”

Gautier Paulin: “The results could have been better, but I’m confident as for the first time this season I had a perfect feeling during the races. We’re working together with the team since four months now, we know each other very well and we proved it again this weekend; the sand was different than usual, but we found the best settings for the bike quickly and I was pleased with my KX450F. The first race was decent, but I lost time when we collided with De Dycker; in the next race I came back to second and could follow Bobryshev easily. Then we joined some lappers and I had to take a new line to pass them. Suddenly I was ejected from my bike; I was surprised and lost time, and then I retired. I think we’re ready for the GP’s; now I go home for one week and then I will be back in the Netherlands the week prior to Valkenswaard.”