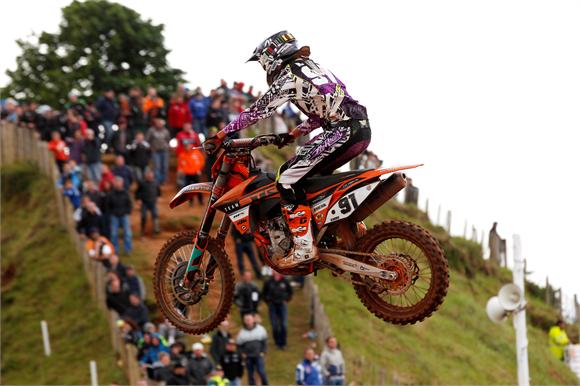 Karro takes fifth podium on the bounce at Desertmartin

After three weeks competing in the FIM World Motocross Championship, Team STR KTM returned to British Championship duties at Desertmartin, Northern Ireland. With Nathan Parker still out injured, it was down to Championship leader Matiss Karro to carry the colours for his team in what is becoming a three horse race for the top honours.

Karro put in an early fast lap before the track deteriorated and went straight into second behind Kevin Strijbos and neither time would be bettered during the rest of the qualifying session. In Superpole, positions remained unchanged with Strijbos taking the honours with Karro in second and home town rider, Martin Barr in third.

Strijbos took the hole-shot from Barr, with Karro in third. Strijbos started to gap the field as Barr and Karro battled for second. Although Karro was clearly the faster of the two he couldn’t find a way past. Karro stuck to his task and eventually forced his way through but Barr wasn’t finished and clung onto Karro’s rear wheel.

On the final lap Barr made the pass only for Karro to regain the position again but as his back wheel stepped out he lost drive and Barr was through again. With no time left to make another attack Karro had to settle for third.

Strijbos took his second hole-shot, again ahead of Barr and Karro and it looked like we would be in for another titanic battle. However, the track was now extremely rough and Karro’s suspension wasn’t working well. The harder he pushed the more he struggled and he had to back off, eventually allowing Shaun Simpson through, leaving him to finish in fourth.

Strijbos made it three hole-shots out of three, ahead of Karro, from Simpson and Barr. Straight away it was clear that the changes made to Karro’s suspension in between races was paying dividends as he chased Strijbos. Simpson’s chain snapped on the second lap leaving Barr in third but Karro was lapping two seconds a lap faster than Barr and was able to cruise home in second to take his fifth podium in a row, albeit on the third step, behind Barr and Srijbos.

Although Karro lost the Championship leader’s red plate, he is only five points behind Strijbos and 31 point ahead of Simpson in third.

Karro said “I wasn’t feeling well this weekend, I had a bad cold and I didn’t really get on with the track but I still got on the podium again and I’m only five points behind Kevin so I’m looking forward to the next round at Hawkstone Park, which is one of my favourite tracks.”

Team Manager, Steve Turner added “We knew this would be a good track for Kevin (Strijbos) and also that Martin would be in the mix on home soil on a track that he knows like the back of his hand. Matiss struggled a bit with the track, especially in the second race, but was back on it in the third race to get himself on the podium again. We now have three rounds left and Matiss likes all three venues so it will be interesting to see who comes out on top at the end of the season.”