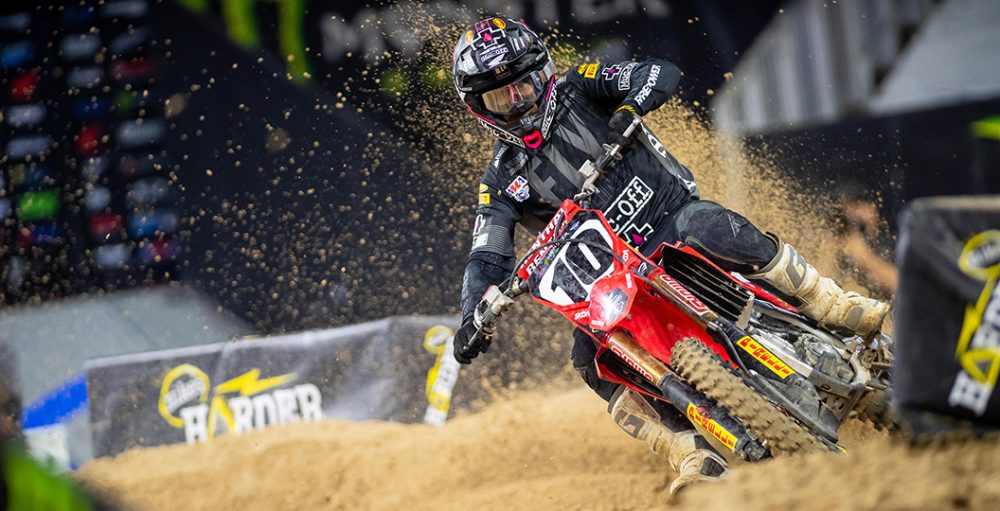 Justin Brayton signs 2022 Supercross deal! Smartop Bullfrog Spas MotoConcepts Honda just announced that Brayton will return to the team that he last raced for in 2019, believe it or not, for another season of Monster Energy Supercross, one that is expected to be his last. Official communication from the team is available below.

Spokane, Washington — MotoConcepts Racing (MCR) is excited to announce the return of Justin Brayton to their roster for the 2022 Supercross season.

Brayton enters his farewell season with an impressive resume, including a multi-year reign as the Australian Supercross champion, a consistent top-five finisher, and his record-setting race in 2018 when he became the oldest racer in history to secure a 450SX main event victory at the famed Daytona race.

Brayton shares the team’s enthusiasm to be back under the MCR tent. “Mike Genova and I have had a great relationship from the time we met and I’m excited to be back alongside him and the MCR team. I’ve learned a lot from him not only at the races but outside of racing as well. We’ve maintained our close friendship the past couple years even when I haven’t been on the team. My trust in Tony Alessi as the team manager is very high so I couldn’t be happier to be back with the team that helped me win the Daytona Supercross. It’s an exciting time in my career,” said Brayton.

The 2022 Supercross season represents Justin’s twentieth season as a professional racer during which he has gained unparalleled experience and knowledge making Brayton a team manager’s ideal rider to work with. “It is an honor to have Justin on the MCR race team for the 2022 Supercross race season. It brings back fond memories of our work together during the race winning 2018 Daytona Supercross season. As this is slated to be Justin’s farewell tour and race season it is our hope and expectation to end his career on a positive note and one that fans will remember.”

Team owner Mike Genova shares Alessi’s goal to create a memorable season for Brayton and the entire MCR team. “Justin has a charisma that fans and industry professionals are drawn to. I have a great amount of respect for Justin as a racer, and as a person. He is high caliber in every category, fits the belief system, and models what MCR is about foundationally. I’m excited to work with Justin again and am confident we’re going to be competitive while having a lot of fun during the 2022 season,” said Genova.

MCR is finalizing the remainder of its 2022 roster and releasing further details in the near future.