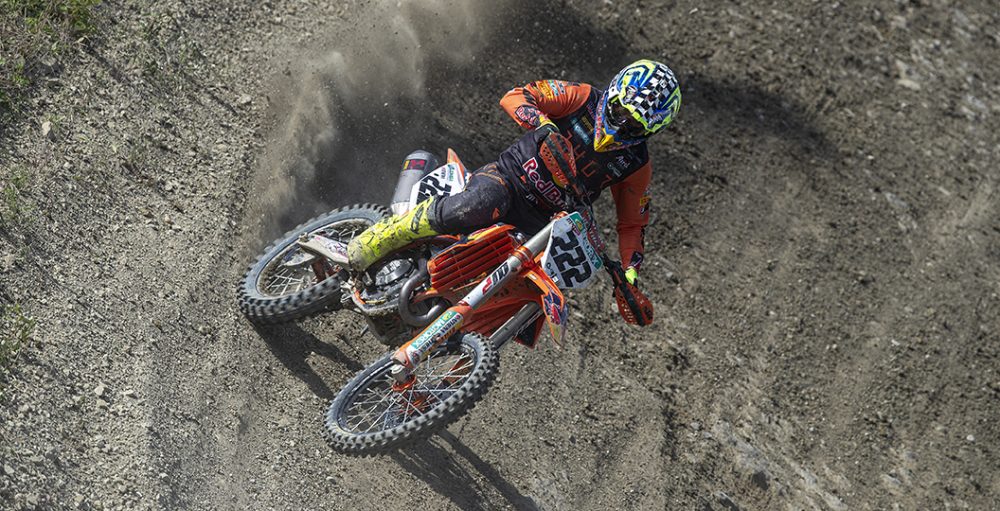 Round one is done and dusted! After months of delays, hype, and more delays, the MXGP of Russia blasted off from Orlyonok’s seaside location (ok, lakeside). With so much time to analyse and predict, I have heard just about every theory possible on who would win in 2021 and why. The class is deeper than ever, giving pundits every opportunity to make a case for their favorites. Not only deep, the class is the healthiest it’s been in years, too. With Gajser, Herlings, Cairoli, and Febvre all returning MXGP champions (not to mention the long list of previous MX2 champions), who’s to say what a good or bad prediction is? In a court of law, I could build a case for any of these protagonists to leave their mark on this year’s campaign. Once the gate drops, though, the riding does the talking.

Tim Gajser’s voice was awfully loud today. The defending champ, his strength is on hard-pack tracks like Orlyonok. While he has improved in the sand (winning Lommel in 2019), there is simply no denying that he thrives when traction is at a premium. This strength is important this season as the first three rounds are on fairly hard surfaces. Orlyonok, Matterley Basin and Maggiora all present opportunity for Gajser to build up a points lead from which he can manage a series. His 1-1 today was not only a huge step towards that plan but the fashion in which he did it was impressive. He carved through the aforementioned field of champions like a hot knife through butter, never really looking to be under duress. The only two riders that seemed to even cause a pause were Herlings and Cairoli, and one could argue that was merely out of respect for their status. Once around, they offered zero response, overwhelmed by Gajser’s pace. It was truly a master class by the Slovenian.

As for Herlings, even though his performance was not what he would have schemed, I was impressed by his mental poise. He had to be fuming inside as Gajser systematically vanished in front of him. Not many humans are capable of simply riding away from Herlings, yet Gajser did it with seeming relative ease. Herlings ability to stomach that and minimize the damage was a big step forward. A younger Herlings would have turned up the intensity to an 11, refusing to accept anything but victory. That risk would have likely put him on the ground, making a tough situation worse. That inability to accept the points available has ruined more than one championship run for Herlings. Maybe he has finally matured into the rider who many have always expected him to be. As they say, championships are won on your toughest days. Allowing yourself a podium finish when things aren’t coming easy is exactly how you end up on top come December. Make no mistake, Herlings will need to win on the tracks he’s expected to win on, but minimizing the points loss on Gajser’s best tracks is just as important.

An underrated ride on the day came from Frenchman Romain Febvre. He had a tipover in the first moto and nearly a catastrophic incident in the second moto but showed the form that made him a champion. Many were high on Febvre’s chances this season and after today, I can see why. He looks to have gelled with the Kawasaki, willing to push to the limits like formerly did his Yamaha. Still, he will need to remove the moments he experienced today if he wants to beat the likes of Herlings, Gajser, or even Cairoli. They aren’t going to leave any room for error. Their goal will be to suck the life out of the field with relentless excellence. Any mistakes will be exploited, much like today. Febvre will need to win several motos if he wants a chance at the title, especially if he’s going to give points away via crashing.

Jorge Prado’s day was uncharacteristic in ways and yet also typical in others. First, his starts are simply unmatched. His technique, reaction time, and determination to round the first corner first is not common. He puts himself into a good position 90% of the time, if not more. His problem today, however, was that he couldn’t make good on it. His races are usually calm, cool, and collected. Even if he doesn’t win, there is rarely any drama involved. Today, there was way too much noise in his routine. Crashes, contact, and chaos reigned for Prado. I expect Prado to bounce back at Matterley but that was a tough day at the office for #61. He is a master of managing a race from the front, not overcoming adversity.

Finally, Tony Cairoli. What could have been! He was simply flying in that second moto. While I don’t think winning was on the cards, I do believe he had a second place in race two. That would have given a great boost of confidence to the nine-time champ and firmly placed him in championship contention. After the crash and subsequent DNF, though, he sits a gaggle (technical term) of points behind Gajser and the rest of the elite. There will be many ebbs and flows over the course of this marathon season but it had to be a bitter pill to throw away such a strong opener. Full disclosure, I am a ‘222’ fan and hurled several curse words when the cameras panned to a scattered Cairoli and KTM. Thankfully, he looked uninjured and ready for battle in two weeks’ time. Forza Tony, the sport is better when you are at your best.