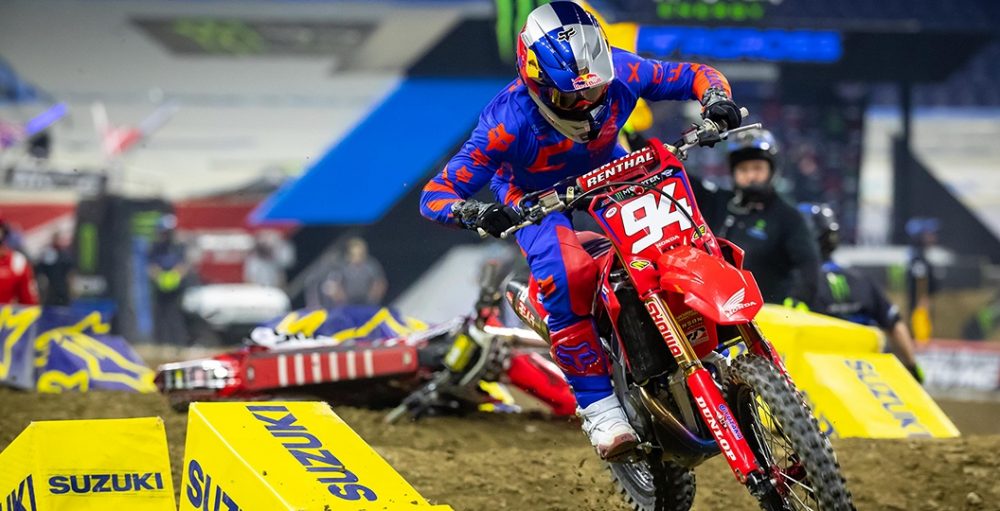 Could this be Ken Roczen’s year? On the afternoon of January 21, 2017, I would have called you a fool if you suggested that Roczen would not have a Monster Energy Supercross title by now. That night, of course, he suffered a horrific injury and has been clawing his way back ever since.

We have seen flashes of brilliance since that terrible night but the staying power simply hasn’t been there. This 2021 season is beginning to feel a bit different, though, isn’t it? That is a scary proposition for the likes of Cooper Webb and Eli Tomac, who both have championship aspirations of their own. To keep those hopes and dreams within reach, though, they need to put some pressure on the 94. The most important dynamic to watch for now is Kenny’s comfort level. If Kenny is allowed to relax and remain comfy, everyone else is in big trouble.

You may be asking yourself, how do they make him less comfortable? Is that even possible? The answer is in the details. So far, Kenny is getting good starts and riding within his limits. He is not under pressure, he is not fighting traffic nor is he forced to do anything he is not comfortable with. For his competition, that has to change. Webb and Tomac have to get into the mix earlier in the main events. They cannot rely on a late-race charge. Further, they need to get aggressive in their passing methods. I am not condoning contact, but force Kenny to ride defensively. That’s what Barcia did early at Indy 3 and these other guys will need to do more of. Instead of Kenny thinking about his own race, they need him to be thinking about their race. That change in thought process leads to taking defensive lines into corners, less momentum, and ultimately higher lap times.

A big key to this change is also the starts. I have been watching Kenny’s starts and his launch from the grate has been nothing less than spectacular. He has his placement decided within the first 10 feet of the start. That’s allowing him to accelerate freely and then determine his braking point to control the first turn. Kenny is at his best when out front and in “clean air.” These great starts are setting him up perfectly to excel in his most lethal approach.

Disallowing his elite sprint speed to shine through should be one of the most prioritized strategies for Webb and Tomac to employ. They have to get in front of him on that first lap and force him to fall into their pace. Even if he is able to go faster, earlier, if they can block him in the early laps, they can negate that edge he has shown in the first half of the race. Webb has shown a propensity for a faster pace than Roczen but it takes 15 minutes to find it. Webb gets better as the track gets worse. If Webb could find a way to keep Roczen behind him early in the main event, he would be in a much better position to capitalize late. Further, he would also have a better chance for the likes of Tomac, Barcia, Osborne, Musquin and co. to create a points gap between he and Roczen. Having more riders in the fray is something that everyone but Roczen is looking for. Roczen wants calm predictability, the rest of the field wants unabated chaos.

I will be watching closely to see if Webb begins to get more aggressive on all fronts. He has shown a willingness to taunt others both vocally and in his riding. I was never much for this stuff in my own career but I do think it could be productive if employed properly. Whatever method it takes to get Roczen out of his comfort zone, that’s what must be done. Force Roczen to worry about anything and everything but the task at hand. That’s easier said than done but it’s a must.

We are six rounds into a seventeen round series. Kenny has shown that he’s the best rider thus far. He has done this before, though. The question remains for how he will handle the next two or three months and if his edge can be maintained. Given his history of late-season struggles, I would be ramping up every effort possible to upset the proverbial apple cart now so that the gap is minimal later. Watch for subtle games, aggressive moves in qualifying and an uptick in the extra curricular activities. It may be the only approach to slow down the Roczen train before it’s too late.