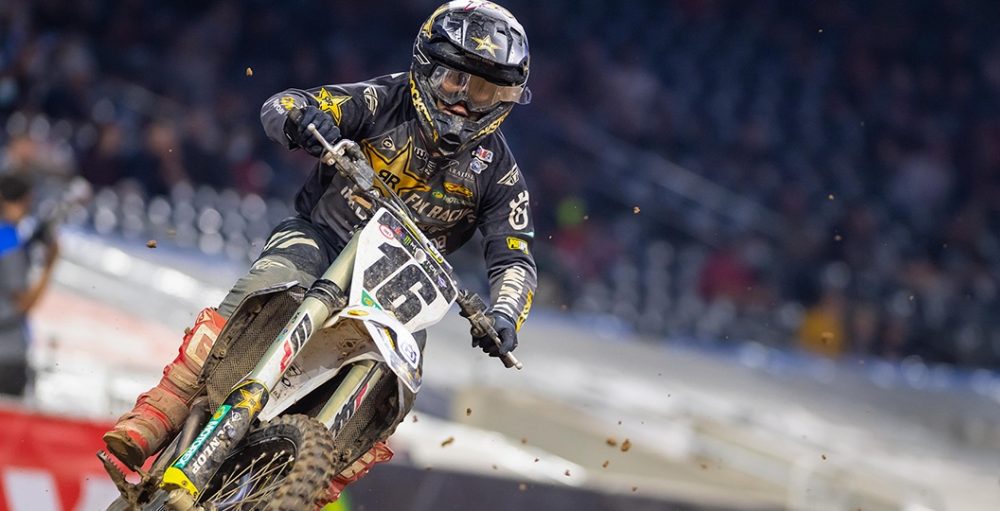 After three rounds of Monster Energy Supercross, we saw a few significant trends that we could draw conclusions from. I believe these conclusions to be a bit premature though. With the round trios that we will see for 2021, each venue may bring a different dynamic. The dirt will be different, we will visit both outdoor and indoor weather, as well as arena versus speedway track layouts. I don’t believe that we will see the exact same rider tendencies week in and week out with such a wide range of racing variation. Given that, I wanted to analyze several riders; both what we have seen and also what we could see in Indiana.

Justin Barcia: What a great start to 2021 for Barcia! His starts have been on point and his confidence in the GASGAS is palpable. I love everything about what I saw from his Houston run. I think we will get more of the same for Indy. He loves soft, rutty dirt. Look for a couple of podiums over the next eight days.

Ken Roczen: Similar to Barcia, Kenny has come into 2021 swinging. He looks to have gelled with the new Honda and seems healthy thus far. He has left a few points on the table via penalty and Deano but nonetheless, is your points leader. I will be curious to see how he handles the track deterioration. When the track breaks down, Kenny seems to lose just a touch of his edge when the track gets wonky. He is at his best on a smooth, groomed track.

Eli Tomac: A bit of a vanilla start for Tomac, eh? Not great, not terrible, just kinda down the middle for the reigning champ. His round two win certainly helped the points situation but he’s also looked blah at times as well. He has historically started slow so maybe this is all just to be expected. I do think the Indy conditions will work for Tomac and wouldn’t be shocked to see him pick up his second win at one of these three. Overall, he’s fine, I just expected more top-end speed.

Cooper Webb: Like Tomac, I am unsure what to think about Webb’s first three rounds. He started off in very rough fashion, way off the pace and searching for bike settings. He has steadily improved since, even winning the controversial battle with Roczen. I think Indy will be kind to Webb. He is at his best when he can jump through the whoops and capitalize on challenging conditions. Look for Webb to leave Indy with the points lead.

Marvin Musquin: Indy will be a return to greatness for Musquin. His skillset will suit Indy perfectly. The only way he won’t find success is due to bad starts or crashes. Outside of that, look for Marvin to be inside the top five at all three rounds. I love everything about what he will bring. He will be wheel tapping his way all the way to the podium.

Zach Osborne: What a trying start to a season for Wacko Zacho. He has had the speed to have multiple podiums already but his 10-10-9 results are humbling. If he can reduce the mistakes that Indy’s soil will likely attract, he could see a nice bounceback. His riding has been far better than his results. When I see great riding and poor results, that leads me to believe that things will turn around. Look for a steady rise on Zach Osborne stock over the next month or two.

Justin Brayton: Brayton’s results are very start dependent. Put him at the front and he can go with the leaders. Put him in fifteenth and he will be fighting to get inside the top ten. I am not sure exactly what the cause of that is, other than he is likely to mimic whatever pace surrounds him. That can be both good and bad. I am sure age is a factor on some level but the good news for JB10 is that he is an elite level starter.

Aaron Plessinger: Another rider that could benefit from a change of scenery is Aaron Plessinger. He has enjoyed Indy success before, winning the 250 main event back in 2016. He rides rutty tracks very well and the Yamaha seems to excel in the same conditions. Look for Plessinger to fight for a top five if he can get the starts figured out.

Dylan Ferrandis: Much like Musquin, I love Ferrandis’ skillset in conjunction with the Indy scenario. The French just have this innate bike skill that sets them apart. I do believe that Ferrandis will need good starts to fully realize his Indy potential but that could be said for most of the field, too. If he finds himself up front early, the sky is the limit for the #14.

Malcolm Stewart: Mookie has had a decent start to the series but nothing flashy. I keep waiting for a breakout ride to occur but maybe this is just who Mookie is now. He was basically this same guy in all of 2020, too. There is absolutely nothing wrong with this version of Mookie, it’s just a big change from what we thought we knew. Success is dependent on staying healthy, though, and he is getting that job done. I would bet his checking account looks much healthier these days, too.

Overall, I expect change for Indy. The tracks will challenge everyone and we should see a few crashes along the way. Mistakes will be more prevalent and for many, keeping their composure will be paramount. For those coming off a tough Houston run, they will need to make Indy count. Look for urgency in their riding (Osborne and Musquin). For those in good position, they may be able to let the racing come to them. The key for everyone will be in the starts, though. The field is simply too deep to give anyone an edge.