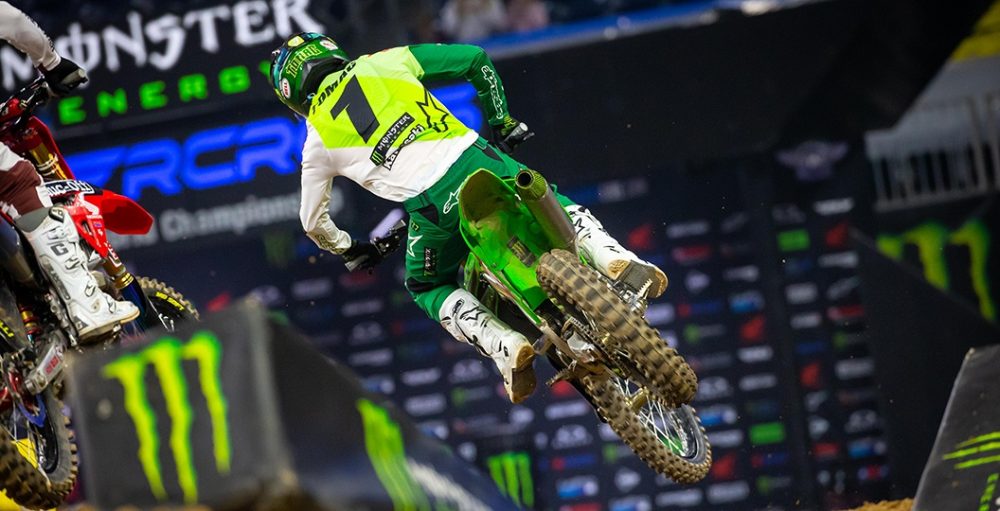 Round one is done and dusted! Houston didn’t disappoint, either. There was great racing in both classes with unpredictability leading the way. That’s the norm for the opener, though, right? The hype, nervousness, and anticipation typically create wild results. Some riders handle these opening rounds better than others. Let’s take a look at how a few key championship players fared:

– Eli Tomac looked great all afternoon and I really thought he would shake off the early season bugaboos. He has often put himself into a January hole, putting his season under pressure before it really even warms. Houston 1 was no different, finding himself in two separate incidents with Vince Friese. We all know that Tomac can make up points like few can but he has to be rolling his eyes at another January points deficit.

– Cooper Webb never really found his rhythm on Saturday. My pre-season title favourite, I never saw Webb find the pace he surely was searching. His lap times were lacklustre in the afternoon but even more telling, his inability to hold the heat race lead was a big surprise. Webb is normally a mortal lock once he captures a lead but that was certainly not the case for round one. I will be looking for an angry Webb to come out swinging at round two.

– Marvin Musquin’s 2021 season was met by a shoulder shrug for many. I was not sure how he would respond to a year away from Monster Energy Supercross, accompanied by father time inching ever closer. He silenced the naysayers though. His third place finish was solid if nothing else. He proved that he will be a factor and could win races if things go his way. Marv is a class act, too, so I give this ride a thumbs up all the way around.

– Zach Osborne had a huge crash on Friday, which I really felt might ruin his weekend. It’s tough to overcome a big get-off like that. Mentally, it can disrupt the focus that months have been spent to zero in on. In qualifying practice, my fears looked to come true. His lap times were nowhere near his potential, leaving many wondering how much damage would be done at round one. His heat race was a revelation, though, passing Cooper Webb late for the win and turning the tables on his weekend momentum. Unfortunately, that’s where the good fortune would end as he found himself on the ground in turn one. He rode well to salvage a tenth, but I have no doubt he went to sleep knowing he left a few points on the table. Look for a nice bounce-back ride on Tuesday for the ’16’.

– Adam Cianciarulo had a few surgical procedures done this off-season so those-in-the-know expected a slower than usual start for the talented #9. We got just that but it was also a successful beginning to a long season. For AC9, remaining consistent is the key to a real chance at this Monster Energy Supercross title. He will win races. He will set the fastest lap in timed qualifying. I am almost certain that those things will happen. Being in the title fight when we roll into Salt Lake City is the goal. To do that, he needs to put in solid results when things are not quite right, just like he did at round one. Remaining patient is the paramount priority for Cianciarulo.

– Ken Roczen is always a hot button topic. One of the most popular SX/MX riders on planet Earth, there are fans and critics en masse. In recent years, his 2017 crash really put a dent in his career ceiling. Many assumed he would have a Monster Energy SX title by now. That assumption has not come to fruition, though. He just hasn’t been able to overcome multiple health issues since that huge setback four years ago. It’s not that he doesn’t have incredibly strong performances, it’s his poor weekends that are the big problem. A bad day for a champion is usually a top five (ask Tomac about the damage of not following that formula). For Roczen, his bad days find himself struggling to stay inside the top ten. The only way to offset that dynamic is to win multiple races. Simply being on the podium is not enough if you are going to add in a few poor results too. That will be the key for Roczen this season. He will either need to remove the bad nights or win much more than ever before. Sounds simple, right? His first round performance served notice that he’s ready to be a contender. Can he execute the plan I laid out though? Time will tell.

– Justin Barcia was simply incredible at Houston 1. He looked fantastic from the first lap of the weekend onwards. He has shown a propensity for opening a series with strength and conviction. He has won the opener three years in a row. That’s an incredible stat and also not a coincidence. He is able to manage his emotions and channel the anticipation that every rider feels entering the opening round. The task now will be in keeping this elite level at every venue. When the dirt changes at Indy (should be soft and rutty), can he maintain this winning pace? Can he match the pace of Roczen and Tomac at Daytona? Will the final two Salt Lake rounds be manageable on his new GASGAS versus the significant struggles we saw him face on his Yamaha? These are all questions he will have to answer but to be the 2021 champ, he will have to do just that.

– Chase Sexton set the fastest qualifying time but that’s where the good times stopped rolling. He crashed on the parade lap twice! He was then caught up in Marty Davalos’ big crash, ruining any chance for a top five or better. I am optimistic on Sexton’s future success regardless of the opening round troubles. If he is able to grab a top five start on Tuesday, watch for Sexton to be a real factor.

– Malcolm Stewart looked great, even if his main event flew a bit under the radar. Much like AC9, Mookie is best served with solid points and finding consistency. They will both have nights that jump off the page. Speed is their friend. If they can find a way to combine their wow-factor speed with 17 rounds of consistency, they could find themselves in a real dogfight come May. I will be watching for when and if Mookie grabs a top three start. I think he will turn the effort up to an 11, which also increases risk of things going terribly sideways. What happens when he goes into full-send mode? That’s the 64 million dollar question.

Tuesday will give us another look at these riders and surely more will make waves moving forward. A series this long will have ebb and flow for all. How they manage the highs and lows is the real key. Keeping an even keel when things are not ideal takes maturity and calm. That’s where I will be focusing most. Speed is not hard to find in this 450SX class but the ability to be there week in and week out can be fleeting.

I am sure other riders will.