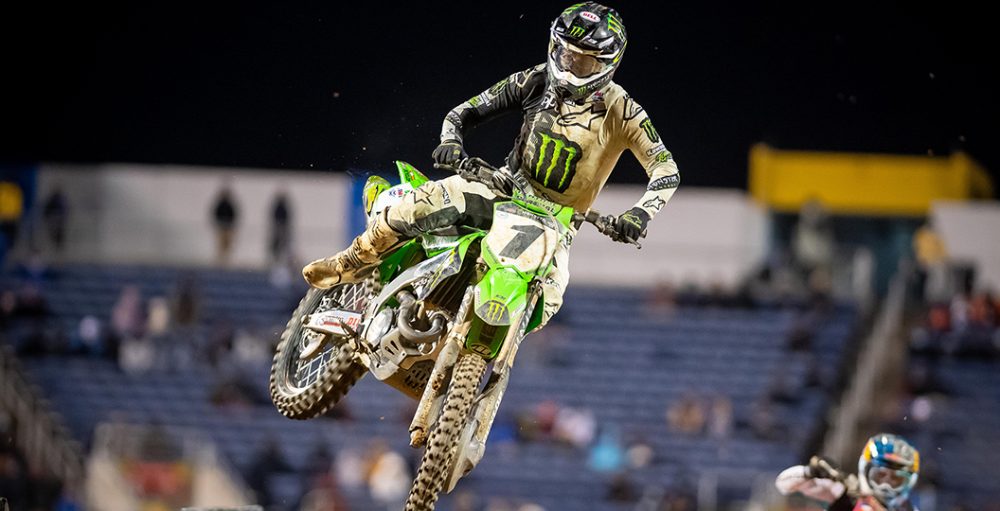 Daytona has proven to be a pivotal race for Monster Energy Supercross. The combination of its timing in the season’s calendar and its unique personality often mark an unofficial “second half” to the season. For those riders who have struggled in the early rounds, it can provide a chance to reset and make a surge down the stretch. For those riders who have excelled, it’s a time to take a deep breath and focus on how to continue success into May. Regardless of how the first half of the season has gone, though, everyone knows that Daytona is an inflection point of their SX season. Let’s take a look at the championship contenders and their situation coming into Daytona, shall we?

Eli Tomac is a Daytona expert. He has won the 450 main event four times, only the fourth rider to do so. If he had found a way around Justin Brayton a couple of years ago, he would have won a fifth (sorry Weege). In prior years, he was the easy favorite going in. With a track record like he has, why would he not be? This year has been a little different though. He hasn’t shown the speed advantage that he has so deftly wielded. He has been a contender, sure, but the foregone conclusion that Tomac would charge through the pack simply isn’t a factor in 2021.

He is much more vulnerable to a bad start than ever before. I was very curious as to how the Orlando rounds would go for Tomac as I felt it was a great opportunity to reverse the 2021 narrative. With Daytona ahead and a history of success down the series stretch, I saw a window for Tomac to regain a championship foothold. Unfortunately for Tomac and fans, that didn’t happen. He actually did more harm than good, unable to match pace with both Roczen and Webb. More than 30 points out of the lead, it’s looking bleak for a repeat championship.

On the other end of the spectrum, Cooper Webb grabbed the bull by the proverbial horns in Orlando. Winning both Orlando rounds, Webb has brought the deficit to single digits. Webb’s mental approach is one of his strongest assets and surely those two wins have solidified his ever-present confidence. He has made huge strides from the so-so level we saw him enter the series with. I am not sure if it was a settings change, struggle with the Houston dirt or simply just a slow start. Whatever the situation, the Cooper Webb we have seen ever since we left Houston has been on a very different level.

As for what I expect at Daytona, he should be fine. I don’t consider it to be a strong track for him but I don’t think it’s a weakness either. I look for him to be on the podium but matching Roczen and Tomac might prove difficult. I don’t think he will view it as a make-or-break race either. Just stay solid, get a podium finish and move on to Arlington. I am sure he knows how good that #1 and #94 are at this Daytona round and will lessen the importance accordingly. Championships are won on your bad days, as they say. While this might not be a “bad day” for Webb, I could see him finishing behind both of his championship rivals.

Last but certainly not least, Ken Roczen comes into Daytona wanting to even the score from last year’s duel with Tomac. I have heard from a few insiders that Roczen has made Daytona a priority this year after giving up the late lead last season. No one can deny Roczen’s speed at Daytona and with Tomac looking to be just a touch off his best form, this could be a great opportunity for Roczen to get back to his winning ways. With how solid Roczen has looked, along with his starting prowess on the 2021 CRF450R, I like how this is setting up. Roczen is not one to put emphasis on one event very often. His laissez faire approach is almost unnerving when wondering about his level of urgency. Given that, I listen when I hear that he is hell-bent on winning Daytona.

The X-factor for all of this is the weather forecast. It is becoming more and more likely that rain will be in play. Florida weather can be tricky, especially given Daytona’s coastline location. The most important aspect will be when the rain comes and how much accumulation we see. Florida rain can come and go quickly but the damage caused can be overwhelming. Remember in 2008, the weather was beautiful most of the day and then turned sour just before racing began. Even in that short time span, the track went from perfect to, well, a lake. That scenario is always in play with a shallow water table (less drainage) and torrential tropical rain. Whatever the case, points will be up for grabs and the gate will drop. Will our winner be one of the likely suspects or could we see mud be the great equalizer? Time will tell.