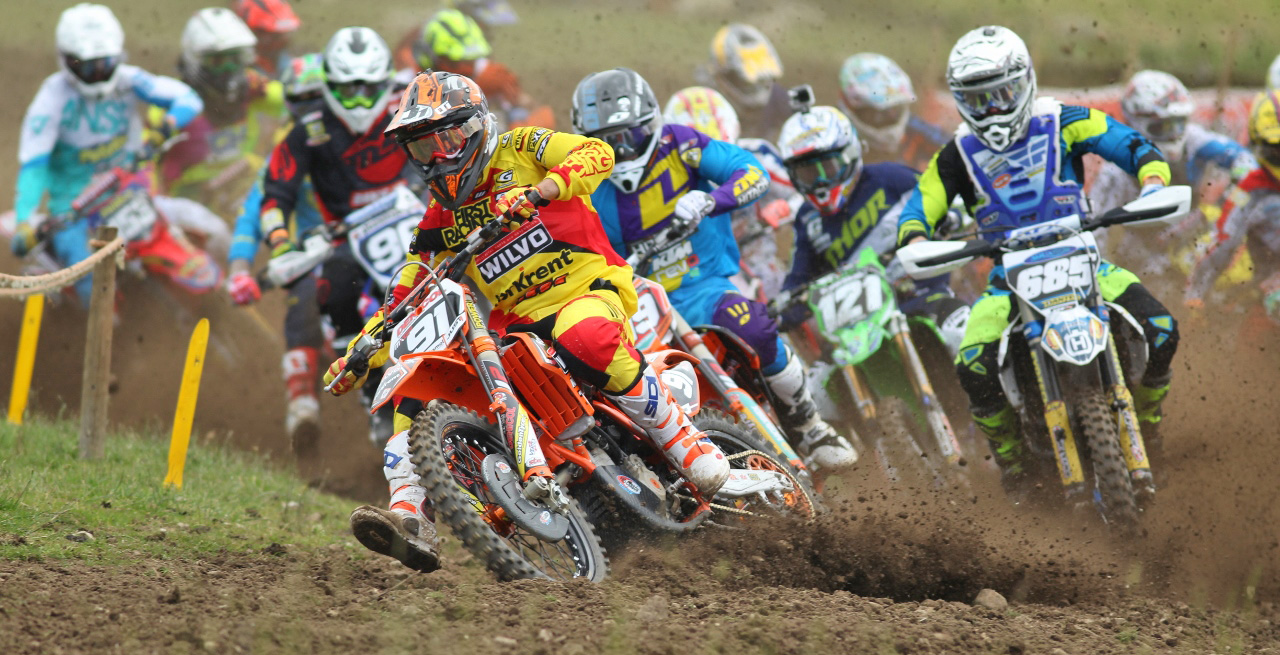 Whitby, UK – 30 June 2014. The Skelder Bank Circuit at Whitby marked the home round of the Maxxis ACU British Motocross Championship and the fifth round for the Wilvo Forkrent KTM team. Overnight rain and heavy showers on Sunday morning made the track very slippery and technical early on in the day.

Sunday started off with qualifying sessions for both MX2 and MX1 classes. In MX2, Matiss Karro and Adam Sterry quickly produced solid lap times that saw them both advance into the Superpole session with 4th and 6th places respectively. In the Superpole session, Karro managed to improve his time and move up to second fastest, while Sterry made a small mistake and slipped back to 8th place.

In the MX1 class, Jake Nicholls comfortably transferred into Superpole by finishing eighth fastest and once in Superpole went on to improve his lap time further to move up to 6th. MX2 race 1:
After the lunch break it was time for the first race of the day, starting with MX2. As the gate dropped, Karro made a strong start but had his front wheel clipped going into the first turn which meant he dropped back to 6th. Teammate  Sterry darted through the pack at the start of the race and into 2nd place. Holding position for as long as he could, Sterry was later passed by wild card entry Anstie. After battling hard, the 17 year old had to eventually concede places to Lenoir and his teammate to finish 5th.

Karro pushed hard but took too long to move forward losing his rhythm, only progressing to 4th by the finish and losing two points to his Championship rival Pocock.

MX2 race 2:
The second MX2 race saw Karro make another great start and take the holeshot and early race lead, with Sterry in 5th place. Karro pushing to increase the gap from the rest of the field, came under attack from Anstie and then from a charging Lenoir. The Frenchman made a pass stick to relegate Karro to 3rd as they crossed the line ahead of Pocock and with it, taking the two points back in the process. Sterry rode a really solid race, holding off a concerted challenge from Mackenzie to take another strong 5th place finish.

MX2 race 3:
The final MX2 race saw Karro and Sterry round the first few corners in 4th and 6th places and quickly set about pushing their way forward. Karro was soon on the back of the leading pair and as Anstie’s machine expired, Karro moved into the lead with Pocock on his tail. He continued to ride consistent laps to take the win and overall victory but more importantly, three more points off his rival. After moving forward to 4th, Sterry chased after Bradshaw for 3rd but couldn’t quite get close enough to mount a serious challenge and had to settle for 4th at the flag.

Karro’s third race result meant he took the overall victory for the day as well as closing the Championship gap to just three points. Sterry finished the day 4th overall moving him up to 4th in the points standing.MX1 race 1:
The first MX1 race of the day saw Nicholls take a clear holeshot and lead on the opening lap. Drama then started to unfold with Simpson finding a way into the lead and Nicholls making a mistake later in the whoops crashed heavily. Remounting down in 32nd place, Nicholls then had to work hard making his way back up to 19th place.  He then made another mistake costing him again as he slipped back to 23rd. With only a few laps remaining, Nicholls managed to get back up to 19th to secure two Championship points.

MX1 race 2:
When the gate dropped for the second race, Simpson and Nicholls rounded the first corner together with Simpson later just taking the advantage. A couple of laps into the race both were then passed by Brit Tommy Searle. As the race unfolded Simpson and Nicholls became involved in a close duel for second place culminating in a last gasp pass by Nicholls on the last corner. Unfortunately he ran wide allowing Simpson to take the place back just as they crossed the line with Nicholls in 3rd.

MX1 race 3:
For the final MX1 race Nicholls gated in 4th place and pushing half way through the opening lap rounded the work area corner passing Anderson for 3rd. During the next corner, Anderson ran Nicholls wide and with nowhere left to go they clashed leaving them both on the deck. The crash resulted in Nicholls suffering a compound fracture to his little finger and was rushed off to the local hospital where he faced the prospect of major reconstructive surgery.

The last race incident meant that Nicholls ended the day in 12th overall and is now 61 points behind the top spot in the Championship and the possibility of facing a lengthy time out of action. Commenting on the day, Matiss Karro said: “At last! It’s been a good day today, although not a perfect one. The first two races were not ideal, as I didn’t have the race pace to run with Anstie but I didn’t need to beat him, I just needed to focus on Pocock. I tightened up in the first race and suffered arm pump and finished 4th. Then I got 3rd in the second race and finally got the race win in the last one. It’s great for the luck to be on my side and get the overall. I’ve closed the gap to three points and I want to continue this for the rest of the year, I really want this title and I’m ready for it.”

Adam Sterry added: “It’s been a good day today, although it’s not really my favourite type of track. In qualifying I was 6th in the timed session but made a small mistake and dropped to 8th in Superpole, which was still okay because the start is pretty fair here. The first race I was 2nd around the first corner and rode a bit tight and suffered arm pump in one arm to finish 5th. The second race I was 7th for most of the race and finished strong in 5th place, so I was happy with my riding because I was able to push all race. Then in the last race Lenoir crashed which meant I finished 4th, I tried to catch and pass Bradshaw for 3rd but he had a small gap on me. Overall I’m happy with 4th overall and 4th in the Championship.”

Summing up the day, Team Manager Steve Turner said: “It’s been a real roller-coaster of a day of highs and lows. Matiss rode conservatively (I never dreamed I would be saying that!) to take the overall. He knows that he just needs to focus on Pocock and that’s exactly what he did, so full credit to him.

“Adam rode strong all day and took a lot of points off his two main rivals Bradshaw and Mackenzie. He now has his sights on third in the Championship, which is becoming a realistic goal for him.

“Jake’s bad luck continued this weekend and the whole team is gutted for him. He was looking well up for it as he battled with Simpson early on in the first race but had a big off in the whoops which left him with a badly cut arm. He just got it strapped up and came out fighting again in the second race and showed no ill effects, as he battled for 2nd with Simpson throughout the whole race. But then he had the misfortune to come up against Brad at the start of the last race and after making a pass on him Brad fought back hard and as usual a bit too hard, leaving them both on the floor and Jake with a really nasty injury to his little finger.

“It doesn’t sound serious when you talk about ‘just a little finger’ but the joint is basically shattered. The surgeon said it is just like he’s taken a hammer and smashed it. Jake’s faced many injuries in the past and he will face this one with the same determination as all the previous ones I’m sure. We all wish him well.”
Image: Bavo Swijgers/CDS.