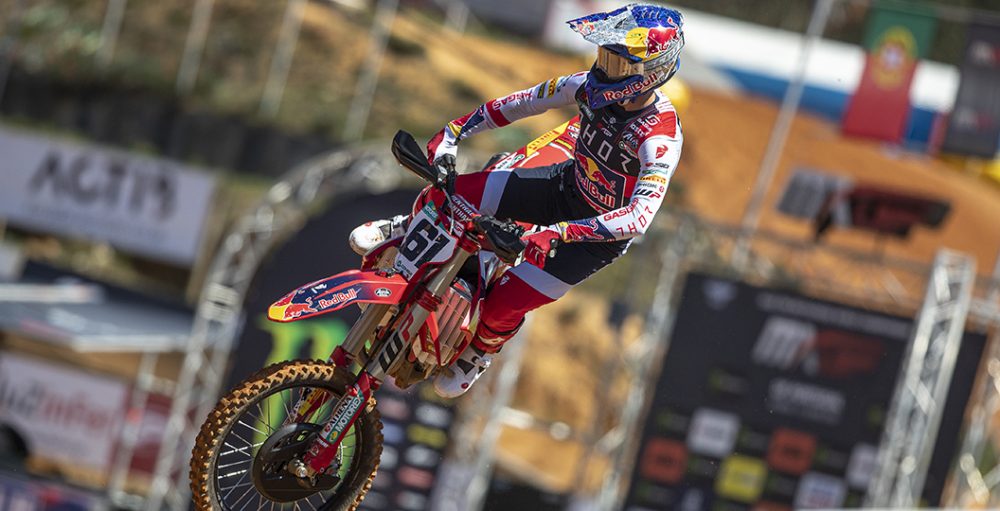 Red Bull GASGAS Factory Racing’s Jorge Prado raced to his first Grand Prix victory in 252 days at round four of the 2022 FIM Motocross World Championship, the Grand Prix of Portugal. It had been a very significant drought and one that really played on his mind – quite the mental block has been overcome now. That much is evident in this exclusive MX Vice interview with Prado, who has stood atop the podium 36 times now.

The Grand Prix of Portugal was a poignant turning point in the premier-class title fight as well. Tim Gajser has controlled the category since the very first round, so breaking his momentum had to be a priority for Prado. That topic is covered in this interview too; there is plenty to extract from his five-minute conversation in a Portuguese car park. This interview was first released as an MX Vice post-race podcast, presented by FLY Racing.

MX Vice: Your first win of the season and first one in a little while! It’s nice to get this monkey off your back and get the ball rolling again. I think that this is going to give you a boost moving forward.

Jorge Prado: Yeah, it is great to get the first one out of the way. It was a tough way… It has been a long since my last victory last year at Loket. It felt like every race that went by that I did not win made it harder to get it done. I am super happy that I could make it happen this weekend. I think that it is a step forward in the right direction. I am happy! It was hard, but we made it happen.

I knew that I had the speed and fitness, but it was a little bit the pressure that I put on myself that pulled me back and did not let me ride loose like I used to ride. I was quite tight. Even today, it was not my best riding. I just made it happen though. I think that it will help me to ride a little bit looser at the next couple of races and to just focus on riding, not so much on other things like winning or whatever. I am very happy.

Did you start thinking about the overall from the start of the second moto? When did that start to play with your head? When did you start to think about just bringing it home?

From the start of the second moto I was like, “Okay! Let’s just get to the finish line, not crash and not make any mistakes.” It was hard, especially when Tim [Gajser] pulled away a little bit and he kind of controlled the situation. I knew he had it under control and at one point, also myself, we were not really pushing over the limit. I also had everything under control. That was the moment when I started thinking. The last five laps were very long, I would say. Very, very long. It took very long to finish the moto. [Glenn] Coldenhoff was coming and really wanted to catch me. I was thinking about the victory and not making any mistakes way too much. We brought it home and that was it. I am tired [laughs].

There was that moment in the first corner on the last lap. You got in all kinds of shapes!

I was like, “Okay. I will make a fast lap on the last lap.” I went a little bit sideways in that corner next to the start and was like, “No, no. Let’s take it easy and not get too aggressive.” I was stressed! I could see the victory, but I saw a guy who was hunting me at the same time. I do not like this situation! I came into that situation because I was overthinking everything. Hopefully I can ride more relaxed and like I know how to at the next races.

What about that first moto? Brian [Bogers] was riding amazing and putting pressure on you. If he had gotten close enough to make a pass, did you feel like you had more in the tank?

I think that it was like eight minutes to go when it was a little bit close. I did a couple of corners and sectors a bit fast, so pulled a little bit of a gap. I do not think that the pace was too high. I think that we were riding… Well, at least myself, I was not riding on the limit in the first moto. I had everything under control and then I saw Tim coming. I knew that he would not touch me, even though he came quite close to us on the last lap. I knew I had something in the tank. If I had to, I would have had something for him.

Last thing then, seeing as we have ended up in the car park. There is not much time before Trentino, but what is one thing that you want to work on? Something that will make you that little bit better.

To not stress too much or put too much pressure on myself, because that leads to very… It feels like the race days have been very long for me lately. I put so much pressure on myself that I am just tired. Not really from riding or anything, just the pressure. It is normal and a part of the game. Like I told you earlier in the interview, my last win was  at Loket last year. So many rounds have passed! We rode so many rounds and I did not win until today. The more rounds that go by, the harder it is to win. For example, Tim won the first round and the second. The third one came easier to him. I could stop him now. Okay, this is a break point. Let’s try to do the same. Now it is my turn! I was like, “Okay, Tim! Stop! Stop.”

You say that you put pressure on yourself and think a bit too much. Is that just on race day? Are you kind of like that as a person? On Wednesday, are you just constantly thinking?

No, just on race day. I think it is because I have had so many injuries the last few years. I do not know. You do not want to take any risks and that pulls you back in some situations, like in Argentina. I saw risks everywhere and did not feel comfortable. That is one of the reasons why I was not riding like myself. On certain points of the track, if I see something that could be dangerous then I do not go wide open like a couple of years ago. I would sometimes think that I have everything under control and then crash or something. I really do not want to get into that situation of being on the ground, getting hurt and just trying to get back racing. I really don’t want to do that. I just want to race and if it takes a little bit longer then it is not a problem, because the season is long. I just want to be on the podium, ride loose and try to ride like myself. That is it!