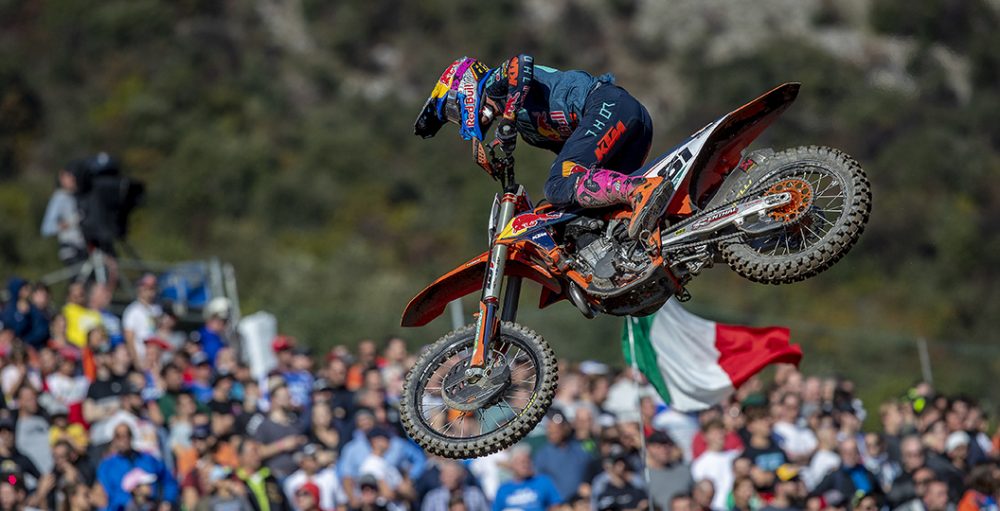 Jorge Prado was not his usual self at the Grand Prix of Trentino, the fourteenth round of the 2021 FIM Motocross World Championship, as he limped to 8-17 moto scores and landed in thirteenth overall. It was quite clear that he was not his normal self, as he led a majority of the laps en route to second overall at the Grand Prix of Spain just last week. Such a drastic dip left onlookers completely baffled. It soon became apparent that he had a monstrous crash on Wednesday, one that left him with a fracture in his lower back.

There is an interesting layer to this, however, because he did not even realise he was injured until race day at the Grand Prix of Trentino. It was only after the first moto, where he struggled with immense pain, that he decided to have scans at the track and those revealed that the injury that was the true source of his pain. Prado shared the following information on social media and confirmed that he does indeed intend to race on Wednesday. It’s going to be a long week.

“Hey guys. Just a quick update on today’s racing. Dealing with a fracture in the lower back did not make it easy – it was painful all day long. I still managed to get an okay time in the practice. Going into the first moto, I was running fifth with five minutes to go and had a big crash. Luckily, it did not make it worse. I had a really, really bad start in the second moto and came out of the second corner last. It did not make it easy. It was a tough day, but happy that I was still able to ride. It is just suffering. Hopefully this heals a little bit faster and I can be a little bit better for Wednesday’s racing.”

Prado is still sat in fourth in the championship standings – thanks in part to Antonio Cairoli scoring zero points on Sunday. Prado is now 98 points behind the current series leader, Jeffrey Herlings, with 200 points up for grabs. It is obvious that his title hopes are all but dashed at this point. It is rather surprising that he is adamant on racing, bearing that in mind.