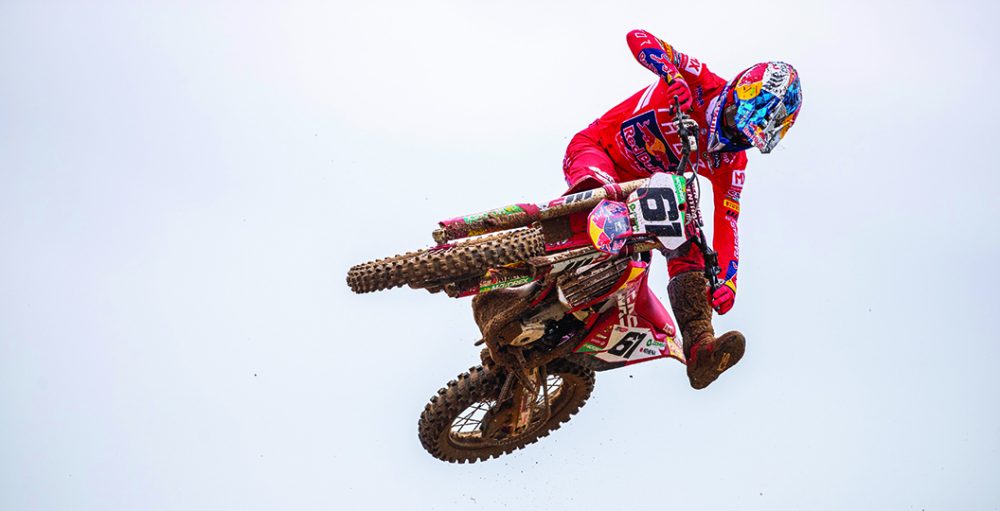 It has been heavily rumoured for months, but it has finally been confirmed that Claudio de Carli’s squad will run the GASGAS Factory Racing effort throughout the 2022 FIM Motocross World Championship. Jorge Prado and Mattia Guadagnini will stay with the squad, but change colours, and Simon Langenfelder has been dragged across from the DIGA Procross team that has run GASGAS’ MX2 effort for the last two seasons. The 450F berth that Antonio Cairoli occupied this year will not be filled.

The Italian set-up being moved to GASGAS machinery is a part of a major reshuffle for the KTM Group. Standing Construct, the team that has represented GASGAS in MXGP the last two seasons, is expected to take control of Husqvarna’s factory effort in the premier division, replacing IceOne who are set to run Kawasaki’s factory effort. It is all change in the Grand Prix paddock, with the opening round in Great Britain just 66 days away. The GASGAS announcement is available in full below.

Gearing up for what will be our third season of FIM Motocross World Championship competition, we are excited to be channeling our racing efforts through one team in 2022 – Red Bull GASGAS Factory Racing! Continuing our quest for world championship trophies, with a super young and super talented rider line-up we are aiming high with a renewed focus on MXGP and MX2 success. Leading us into battle in the MXGP class is two-time MX2 World Champion Jorge Prado while in MX2, current world number four Mattia Guadagnini will compete alongside young German hotshot, Simon Langenfelder.

Heading into his third season of competition in the highly competitive MXGP World Championship, Jorge Prado can’t wait for the gate to drop at round one. Following two testing, yet highly rewarding seasons in the premier class, the Spaniard has overcome injury and illness to quickly establish himself as one of the main protagonists in MXGP. Bringing everything he has learned during the last two years to the table, Prado now has all in place to challenge for his third world title.

Leading our effort in the MX2 World Championship is fun-loving Italian Mattia Guadagnini. Undoubtedly the best rookie in the 2021 campaign, the 19-year-old secured two GP wins and four overall podium results on his way to placing fourth in the final standings. With a solid debut season under his belt, the Italian is eager to get things started in his new team colours, at the very same venue at which he secured his maiden MX2 class race win, Matterley Basin.

Joining the team and beginning his third year of racing an MC 250F in the MX2 World Championship is Simon Langenfelder. Completing his first full season in 2021 (injury ended his 2020 campaign prematurely), the youngster established himself as a great starter with incredible consistency, ending the year in a well-deserved tenth place overall. Aiming to bring a touch more speed to the GPs in 2022, Simon is on the right path to contend for top-five positions on a regular basis.

Jorge Prado: “It’s a really special feeling for me as a Spaniard to be competing for GASGAS with its Spanish heritage, I can’t wait to start racing in my new colors in February. To begin the season early is perfect for me as I prefer to race and already I feel great on the new bike, so I’m really excited for round one. I’ve learned so much during the last two seasons in MXGP and feel that I can improve my level even more in 2022. For sure it won’t be easy, and I’ll be racing against some of the best racers in the world who have much more experience, but I feel ready to battle with them once again. With what I’ve learned during the last two years I believe I can run up front more consistently and I’m excited to get the new season started.”

“It won’t be easy, and I’ll be racing against some of the best racers in the world who have much more experience.” – Jorge Prado

Mattia Guadagnini: “I’m really excited for the 2022 season and to be a part of Red Bull GASGAS Factory Racing is just amazing. The new colours are so good, and the set-up looks awesome! It’s great to stay within the same team structure as it’s like one big family, which is really important for me. All the hard work that we put in over the last year really paid off as I had such a great season in 2021, it was even better than I expected. For sure it was an amazing year and with another winter together I believe we can be even better in 2022 on the new GASGAS bikes. The first round isn’t too far away now and I’m so excited to get started at Matterley Basin. It’s one of my favourite tracks and it’s where I won my first ever MX2 moto, so I have fond memories of that place. It would be amazing to start the season with a strong result there and carry that momentum into the rest of the year.”

Simon Langenfelder: “New team, same colours! It’s super exciting for me to continue racing on GASGAS bikes. With the support and guidance of this experienced team, I think I can really progress in the MX2 World Championship. I’ve spent a lot of time in Italy with my new teammates recently and everything is really positive. I’m really enjoying this new environment and team structure. This off-season isn’t quite as long as we had last year but for sure I can make improvements. One thing that I will be working on is my speed, to be faster through the opening laps of each race as the intensity after the gate drop is so high. Overall, the future looks really great and I think 2022 will be the year that my results improve to the next level.”

Claudio de Carli (Red Bull GASGAS Factory Racing Team Manager): “It is an exciting step and a big honour to be leading GASGAS in MXGP next season. With the riders that we have, Jorge, Mattia, and Simon, I strongly believe that we can challenge for both the MXGP and MX2 World Championship titles in 2022. There are just over two months to go before round one in February and we are already ahead of schedule to be ready for the opening round in the UK. We have three really talented riders and from a technical point of view, I know we have the best bikes out there. It’s the start of a new chapter and the team cannot wait to begin the new season with an all-new look.”

Robert Jonas (VP Motorsports Off-Road): “The GASGAS project has been an exciting one from the very beginning, and from 2022 GASGAS is set to have an even stronger presence in the FIM Motocross World Championship. Focusing the racing effort into one team, with three incredibly talented riders across MXGP and MX2, is a positive step for all involved and one that we believe will further establish GASGAS as one of the championship’s strongest teams. Ahead of the 2022 championship there is a short off-season, but we know that the team and riders will be more than ready for the first round in February.”