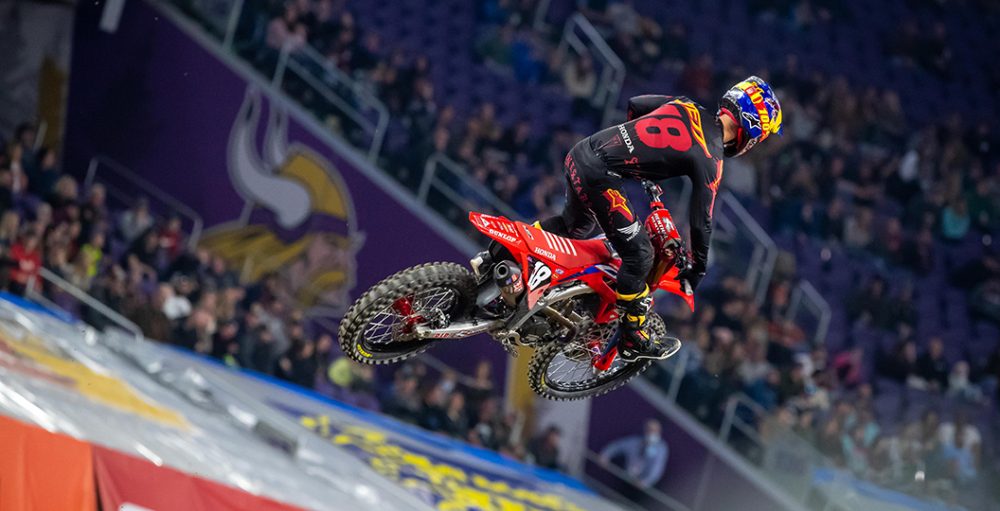 Jett Lawrence talks about his supercross win in Minneapolis, Minnesota.

The seventh round of the 2022 Monster Energy Supercross series marked the start of the 250SX East campaign; Jett Lawrence headlined pre-season discussion and backed that up with a clear victory in the first main event of the season. Five seconds was his margin of victory and he set the quickest lap time of the race by three tenths. Minneapolis, Minnesota, was the setting for his fourth victory indoors. Three points is his advantage heading into Arlington, Texas, this coming weekend.

Following the round, Lawrence spoke to the media about his triumph and touched on some poignant topics that are circulating. There is no hiding from the fact that he receives more attention than his peers and, interestingly, he claims that he does not understand where that hype comes from, as he views himself as just another racer who has done very little in comparison to his predecessors. It is a rather honest assessment and one that could win him even more fans.

MX Vice: Talk about managing that race. You had Austin [Forkner] pretty close for a while and everyone’s saying how gnarly the track was. Was that full pace or were you trying to manage it a little bit?

Jett Lawrence: I would say just trying to manage it – the track got pretty chewed up. It could cost you with any slight mistake, like missing a line, especially in that long rhythm where we were going three in! That was a really big stretch for a 250F. Through the transitions it got some ruts at the bottom, so I was just focussing on staying in my line. Forkner was keeping me honest. I looked back and I was like, “Dammit! I can still see green.” I had to make sure that I stayed on my toes there, but I could see both guys. They were riding really well and keeping me honest. I kind of felt like it was a really good race – I had a good flow and the track was really gnarly. I found a way how to ride it. I was pretty happy with my pace and how I felt. It was all around a pretty good race with the boys.

You looked comfortable on press day and throughout today as well. Take me through your weekend as far as bike changes and what contributed to your comfortable feeling today.

Bike changes were pretty good. I came in with the bike feeling really well. It was just a few clicker changes [once we got] here. The biggest change was to the engine – we went with a different primary from practice to the heat race, just because of the start. I was a little too aggressive on that. Coming in, I just took my time on press day. I could see on track walk that it was pretty notchy and peaky. I was just taking my time and I felt like a lot of the guys were not rushing into sending big rhythms.

Everyone was just feeling it out and it was the same in practice. I felt like some guys were sending it, but others were just taking their time and getting in a flow. I felt like that was a little different for me. I am normally that dumb guy to send it and try to do those hero lines. I think it was a much calmer day coming in – the bike was handling awesome. There were only a few clicker changes, like I said, so I think that is what helped me in the main event.

You know, you were going to race Anaheim 1. Was it weird to get into the mindset of going racing today? It was a day race, you were pitted inside of the stadium and there was no interaction with fans. It was too cold to go outside and then your heat started in daylight. Was that a weird thing or did you feel ready to go from the moment that you showed up?

I was totally oblivious to that. I was just excited to go racing! I was a little kid in a candy store. I could not wait to get on the track. I was like, “I just want to go back out again and do more laps” every time that we came off the track. It was just about having a great time. I think Christian Craig said this on the west coast – it is just about being present and enjoying it. You never know what could happen in the future! The biggest thing is that I was just enjoying it today, having fun and talking to the riders.

The last few years I have been a real pain in the butt. I have been really focused on myself and I just think that is not the way to go. I think Colt [Nichols] was really good about that last year, just talking to riders. We are all going out there to do the same thing and I think that creates that extra bit of respect for each other. I had a great day today, even without the win. I had fun riding my bike. I think it was more about being excited to race again.

Christian [Craig] is 30-years-old and he has realised that he has to be in the moment. You are a teenager and you are finding that out. So many people do not realise that until later in life, so what made that sink in?

Dazzy [Darren Lawrence] just beat the information into me really. No, I’m just kidding! I just think it is being more mature and learning from the other riders. There are a lot of riders out there who know a lot more than I do and have way more experience, so I think it’s stupid if I do not listen to them and learn off of those guys. Just listening to the west coast guys and even the 450SX class, learning off of what they say. I am pretty sure that I will learn something off of Forkner and Cameron [McAdoo] this year too. I think it is important to keep listening and learn from other people’s mistakes.

They ran a poll on whether you are going live up to the hype during the broadcast. This is hard enough to do without the extra hype or pressure on you. Do you welcome that or wish that you could blend in like everyone else?

I do not really believe in the hype, to be honest. I am no different to everyone else. I see myself as just a normal kid, an 18-year-old racer. Nothing crazy. I think that everyone should be hyped up, because this sport is so challenging. So much time and effort is put into this sport that no one really sees! I think that everyone deserves the hype, because this is probably the gnarliest sport in the world. I can guarantee that. I do not pay attention to that though, because realistically on paper I have not done much yet compared to other guys.

Do you feel like you have a target on your back, especially now that you have the red plate going into the Triple Crown next week? Do you think that the battle and success that you had in Pro Motocross will help you deal with having that target?

I think that having the red plate always means that you will have a bit of a target on your back, because you are obviously that guy who has the points lead. You have really got to make sure that you stay on it at this point in time, because the points are so close. If I lose the red plate next week then I am not going to be too worried, as long as I am just there on the podium each weekend and keep putting in good races. I think I know how to ride. I think I should be okay, but I am definitely going to have a target on my back with the red plate. It could be on anyone and you want to go after that guy. Hopefully everyone has a really good race and we get some really good racing, just like tonight.