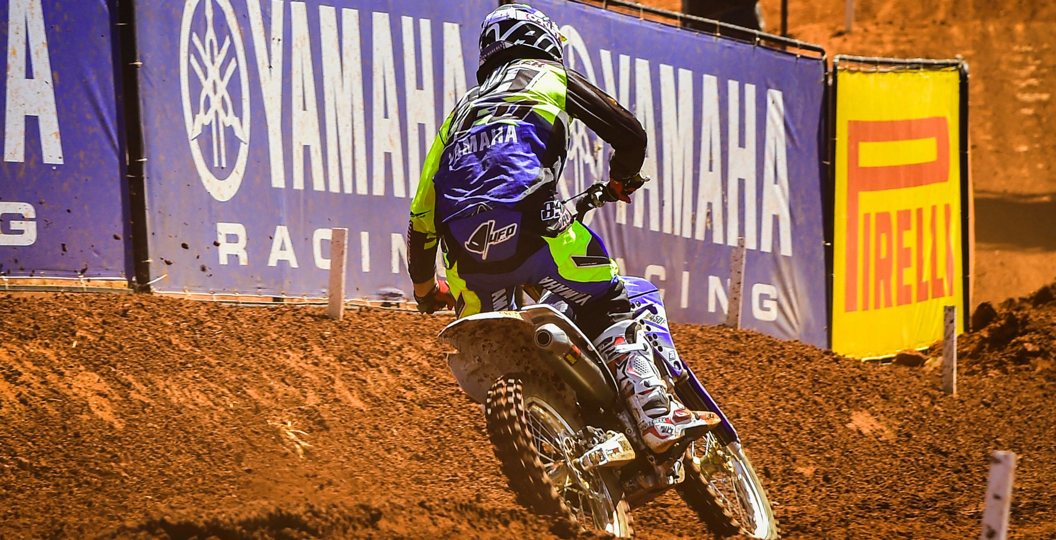 Jeremy Van Horebeek became the second rider in the last four seasons to earn an FIM Motocross World Championship runner-up finish as part of the Yamaha Factory Racing team in the premier class when he bravely scored thirteenth position in the first moto of the Grand Prix of Gois in Brazil. The Belgian injured his right ankle during the qualification heat on Saturday for the sixteenth round of seventeen but strapped up the joint and gritted his teeth to secure enough points for the number two plate for 2015.

After 12 podiums and victory in the Grand Prix of Czech Republic JVH confirmed his season-long status as the second best rider in MXGP thanks to his determination to finish the job on what was the championship’s second visit to Brazil this year. The Trindade layout featured a wide range of jumps and a demanding rhythm across off-camber turns and fast approaches courtesy of a largely hard-pack terrain. 25,000 spectators braved hot sunshine and temperatures that topped thirty degrees.

The weekend began on a promising note for Yamaha Factory Racing as Van Horebeek quickly discovered some effective lines around the red dirt and set the fastest lap in Timed Practice to go to the gate first for Saturday’s Qualification Heat. JVH was running in a comfortable second position when an uncharacteristic mistake resulted in a hefty crash through the waves section close to the pitlane. Jeremy was able to recover his ‘89’ machine but then pulled out of the race with a twisted ankle. Despite a lot of pain initial medical checks seemed to rule out any broken bones and the 25 year old was able to put some pressure on his foot.

On Sunday Van Horebeek endured the first moto and ran inside the top ten for long periods before slowing his pace and crossing the finish line in thirteenth. His collection of eight points was enough to sit in second for the year in front of countryman Kevin Strijbos. Jeremy is undergoing a medial check on the joint in Goiânia Sunday evening and the extent of the damage will determine if he can compete at the final fixture of 2014 in Mexico next week.

DP19 Yamaha Racing’s David Philippearts had recovered from the ankle injury that limited his progress at the last round in Belgium. The former World Champion rode to tenth position at Trindade (thanks to two results of tenth place in both motos) but his lack of bike time and race time throughout August affected his physical stamina and he had to ride conservatively to reach the finish line on the two occasions. DP is also tenth in the MXGP standings and needs to find twelve points more than Davide Guarneri to move up to ninth at Leon next Sunday. Rui Gonçalves used his Bike it Yamaha Cosworth to score a best result of ninth place in the first moto but suffered a broken chain in the second race and was forced to retire.

There is just one week left in the 2014 FIM Motocross World Championship. The teams and riders quickly packed up the boxes and freight in Brazil in preparation for the trip to Mexico. The second ever Grand Prix in the country will travel to Leon where the MXGP and MX2 contests will close this year and the finest athletes in the series will then look ahead to the 68th Motocross of Nations in Latvia at the end of the month.

Jeremy Van Horebeek: “At the moment it still feels strange to think I am vice world champion but, you know, it has been a great season. We’ve had many podiums and have been so consistent. There have been a few rookie mistakes and I’m still learning in this class. I’ve ‘grown’ a lot this year and I think I will be ready in 2015 to chase that world title. Overall 2014 has been awesome with more ups than downs like that great win in Czech Republic. Yesterday I messed up. I was consistent in second during the race but I was already thinking about today and made a mistake. It was a tough race [in the first GP moto] but we got it done. It has been so good to work with these guys and like I’ve said before the team is like family for me. We all wanted this bad. We will have one hell of a winter working again to improve further. The bike is awesome but we can get better.”

David Philippaerts: “It was not an easy week after more than a month off the bike. I only started training last weekend. The track was really difficult and it was so, so hot out there. I was finished at the end of the second moto and I am quite angry because it was possible to have a good GP here. It was not easy for my ankle with all the jumps and now I want to finish the year well in Mexico. It has been so busy getting the team set-up and organised for 2014 and now for 2015 I want to concentrate on my condition and being even better.”

Rui Gonçalves: “I was really excited to come here because it is almost like a second home GP for me. The first moto was OK. I didn’t have a great start but I got into the top ten and finished ninth. I was looking for better in the second moto but the start wasn’t there again and it was quite tricky in the first laps with the watering. I made some passes and got up to eighth but then we had a mechanical problem so I had to push it to the pits. That’s the way it is. There is not much I can do so I am already thinking about Mexico and try to finish on a high.”