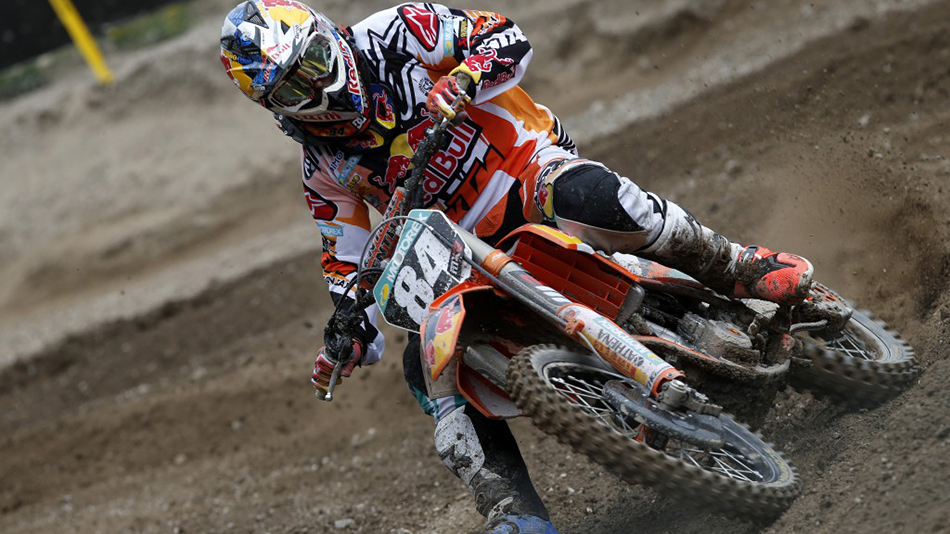 The Red Bull KTM Factory Racing team was in action this weekend in Arco Di Trento, Italy for Round Four of the Motocross World Championship, which yielded a hard fought overall win for Jeffrey Herlings in the MX2 class and a fifth place the factory teammate Antonio Cairoli in MXGP.

Jeffrey Herlings, who has been injured and missed the GP of Brazil came away with a 1-2 results for the overall in MX2. Tony Cairoli fought back to sixth place in his first race but a series of mishaps on the slick and slippery track knocked him down to fourth in the second race to finish overall fifth. But the Italian rider still leads the MXGP championship standings.

MXGP
Tony Cairoli, who had crashed in warm-up on Sunday morning, got off to an uncharacteristic bad start in the opening moto to be buried back at twelfth on the very technical track. Eighteen minutes into the race he slipped past three riders in one corner to move up to seventh and then concentrated on closing down an eight second gap to the front group. He fought back to capture sixth place but then ran out of time. The race went to Cairoli’s rival in the points, Gautier Paulin.

Cairoli was sixth out of the gate in his second race and progressively worked his way up to second. But with 14 minutes to go he had a series of near crashes on the increasingly slippery track that dropped him back to fourth. He made a valiant attempt to close on the three lead riders in the last few laps but slipped again in the final lap and had to settle for an eventual overall fifth.

The Italian multi world champion who rides the KTM 350 SX-F said he had tried to get a good result for his many fans.“I did have the fastest lap in both races but I need to be more consistent,” Cairoli said. “I really wanted to win the second race today an I was working my way back to the front then I made another mistake.” Cairoli said he was hoping for a better result next weekend in Bulgaria.

MX2
Jeffrey Herlings, on the KTM 250 SX-F fought hard throughout to win the opening moto by three seconds from Arnaud Tonus but admitted later that he was missing some bike rhythm after his injury layoff. Teammate Jordi Tixier was sixth.

Herlings knew he had moved up to third place in the championship points after the first moto and was intent in trimming the deficit even further in the second race. He was sixth out of the gate and sat at fifth through the opening half of the race before making a move into fourth place with 16 minutes and two laps to go. He wrapped up the race in second place after the win went to compatriot Glenn Coldenhoff, which was enough for the overall GP victory. Herlings is now in third place in the points, just ten points off the leader Coldenhoff.

Herlings said the races were not perfect but he was still happy with the outcome. “My starts were not so good but I managed to work my way to the front to win the first race and to finish second in the second race. Considering I was injured and had also been sick with a virus infection and I haven’t had much time on the bike, we can’t really complain.”

Tixier was riding with a badly swollen wrist from a crash on Saturday but still managed to pull off a couple of sixth places. “I think my speed was better than in Brazil but it was difficult to ride with my wrist problem and there was a lot of pain in the braking bumps. But since Brazil KTM has let me try a lot of new things on my bike and I am feeling much more confident, also in my head.”

WMX & EMX125
Arco di Trento was also host to the second round of the WMX championship that yielded a podium third for KTM’sNatalie Kane of Britain who now leads the championship points by two from Chiara Fontanese, who won the GP in front of her home crowd.

Also racing in Arco were the 125 riders in the opening round of the EMX125 and the stand out rider was Davy Pootjesof the Netherlands who picked up two straight victories in impressive style on a track he described as very slippery, with lots of bumps. “But I liked it,” he said. “I felt really good on the bike. I had a good start in the first moto and I won easily and in the second I was sixth at the start and passed the other guys and won with a nice gap. I was riding good all weekend and now I’m looking forward to Bulgaria.”