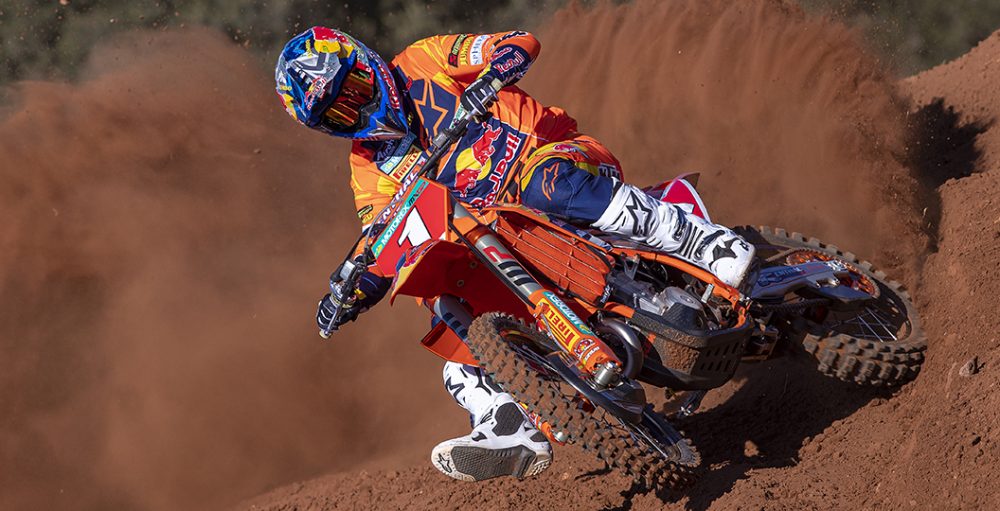 Jeffrey Herlings weeks away from return to riding, hopes of title defence dashed.

When the Grand Prix of Great Britain was postponed by seven days, because of Storm Eunice, some fans were hopeful that Jeffrey Herlings would be able to make it to the starting line. Herlings is not going to be on track for a while though – he only had the stitches out of his heel last week and cannot put any pressure onto his foot for six weeks. Given the current situation, it is likely that he will not be in a position to join the Grand Prix series until late May or early June. Even that could be a push.

“I had the stitches out from my heel a few days ago and now I have to avoid putting any pressure on my foot for around six weeks. I will start physical training again next week with some activities like swimming. Obviously, I’m pretty limited at the moment but I don’t have any pain and now we just have to be a bit patient before we can look at it again, do some rehab and start riding. Best of luck to the Red Bull KTM team this weekend. I wish I was there but we’ll be back soon.”

Herlings has put in some brilliant performances whilst injured in recent years, hence why some are holding onto hope that he is going to limp into action and salvage points. It is simply not possible this time around though and, after struggling with another foot injury for a couple of years, he is keen to take his time in his recovery. After all, any hopes that he had of defending his title are gone at this point. It is a crushing start to the season for the five-time world champion.

There are now rumours circulating that Red Bull KTM Factory Racing are looking into a fill-in rider not named Antonio Cairoli, although that is far from being confirmed at this point. Cairoli’s not racing the Grand Prix of Great Britain, despite hints on social media and whatnot. Tom Vialle is currently the only Red Bull KTM Factory Racing rider on the provisional entry list for the opening round of the 2022 FIM Motocross World Championship.