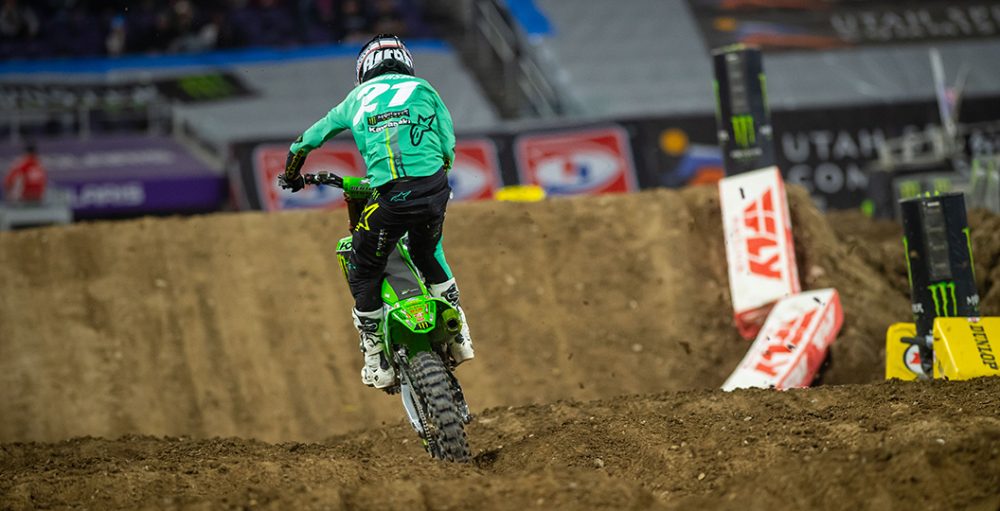 Jason Anderson talks about his supercross win in Minneapolis, MN.

Jason Anderson returned to the top step of the podium at round seven of the 2022 Monster Energy Supercross series. The victory marked his third of the season and second in succession, confirming that he is indeed the guy with all of the momentum. Three points is the deficit that he faces to the current championship leader, Eli Tomac, now, so he has managed to recover from the hole that he put himself in early on. This thing is quickly turning into a two-horse race.

Immediately following his triumph, Anderson spoke with the media in the post-race press conference inside of U.S. Bank Stadium. There are a lot of hot topics tackled below, including changes to bike set-up and mentality. So much has been said about the move to Monster Energy Kawasaki and the positivity that has brought to his life, but it seems as though that allowed him to make personal changes that have had an even greater impact on his on-track performance.

Jason Anderson: I think that my speed was good – that is not something that I struggled with. I just think that you had to have a lot of focus on the track tonight. It was breaking down left and right. There was a three out of the corner and Dirt Wurx did not prep the corner, which made it really tough on us for the whole main event. The whoops were basically an endurocross section. It was just a tough track! It really was. Speed-wise I felt good. You really had to focus and hit your marks well on a track like this. I think that is more what I meant when I said that I felt a little off.

It seemed that you just settled in with around seven minutes left. Was this track really hard to make up time on? It seemed that way.

It was very hard to make up time. Honestly, I felt like you were a little bit on the edge when you were trying to make up time. I have gotten myself in trouble a couple of times this year by doing that. It is something that was mentally tough for me, because you obviously want to win and push the whole time. I felt like a couple of times I was taking more risk than I really wanted to. I obviously do not want to end up on the ground or get hurt! I also want a good result for the long game though, you know? I tried to start making up some time, but Chase [Sexton] was riding really well. I was trying to keep pace and then if anything happened I could be there. Yeah, it obviously happened! It was a tough track, like I keep saying.

Riding throughout the week. Is it even possible to prepare for tracks that break down in this manner? Practice tracks are pretty well groomed. What do you guys do to simulate race conditions?

Yeah, I feel like that is tough to do and especially if you ride by yourself. Every Tuesday we have been riding the Pro Circuit track. Bones and the crew have had the track dialled for us. All of the PC guys go out there and we get it as torn up as possible! Honestly, I have been trying to ride as many public tracks as I can as well. Just to see if I can ride at really rough [tracks]. You cannot mimic what we raced on tonight! It’s just impossible. I feel like if you did then you would not make it to the next race.

Have some rougher tracks had you veer away from what your initial set-up was back at Anaheim 1?

I have been trying to progress my bike, but I keep going back to the same set-up. I feel like we are working towards getting some feeling in my bike with other settings. We are not quite there yet. It is a work in progress for us. I feel like what I have got right now is a good base and we have really gotten far with it. I think that there is still some progress to be made with my bike. It is tough! To find that magic setting is really tough. We are working on it.

I am sure there was a little bit of uncertainty when changing team and everything. The end goal is obviously the championship and there is a lot of racing left. Do these wins help with your mindset, confirming that you made the right choice?

Yeah, I have really only been with one team. Any change was going to make me nervous! For me, I just wanted to make the right decision and have success. That has been my goal since I was a young one. Being able to get these wins has been amazing! It is refreshing for me and my career. It just makes me want to keep going. I think that is what is cool about our sport. It will knock you down, yeah, but when you get that one little bit of success then it just keeps you going. That is what I feel right now and it is quite awesome.

A lot of people talk about the uncertainty in this sport – you never know what is going to happen next. Do these wins make the grind from Monday to Friday a little bit easier? What is that like.

It is tough, because once you get into the position that I am in right now then you try to keep your mentality as even as possible. You always have a goal when you show up on Monday. You show up and want to ride – you want to improve the bike and yourself. For me, at this point in my career, I am going to celebrate any win that I get and feel good going to the track on Monday. Those tough days, when we do not get the result on Saturday, are still going to come and that is just our sport. I am going to enjoy this while I can and keep striving to be better.

You know what it is like to deal with the pressure of winning this title and how tough that is. Is there a moment this year or in the off-season where you kind of reset and said, “I am all in. Whatever that brings it brings.” It sure seems like you are not worried about the red plate or points lead.

To be honest, until I call it quits on my career, I just want to put my heart out there. It is honestly a tough thing to be vulnerable with yourself and able to suffer. I am just going to try to put it all on the line until I call it quits. I feel like that is a change for me, just mentally and stuff like that. Changing my team has been refreshing, but it’s more personally that I feel a lot better. I am enjoying myself and trying to embrace each emotion, no matter if it is positive or negative. I leave the track and go hang out.