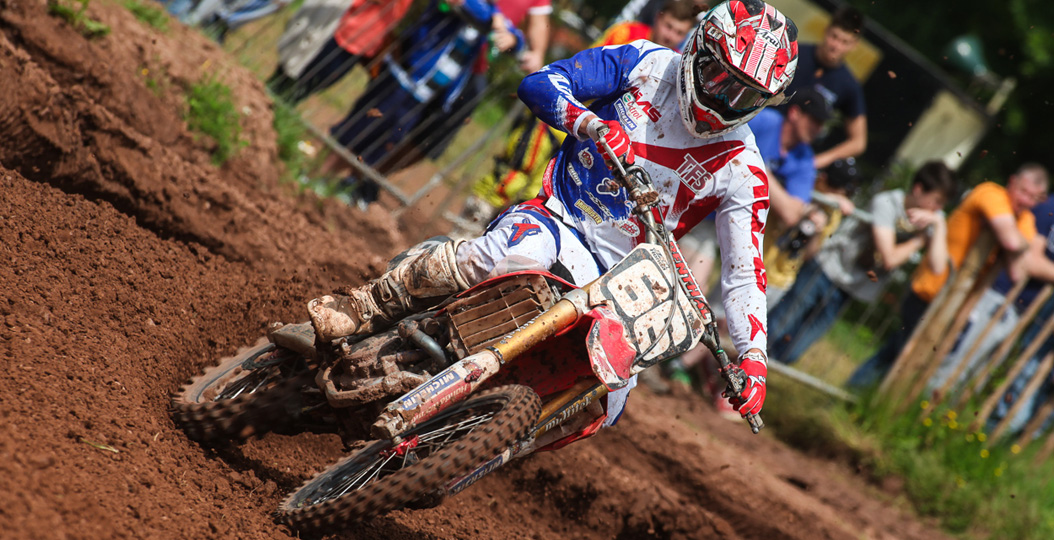 Fresh from the British Grand Prix, JAR Honda’s Lewis Tombs made his way to the fourth round of the MX Nationals at Pontrilas on the Welsh border, while MX1 rider Matt Moffat decamped to Belgium’s Lommel to prepare for the Pro Nationals Festival at Weston-super-Mare next weekend. With conditions very wet and muddy, Saturday’s qualifying session and first race would turn out to be quite the challenge.

The Pro MX2 qualifying session got underway after the organisers amended the track layout to cut out two sections of the track that were too problematic after some extensive rain earlier in the week, and Tombs qualified in sixth. Despite the deep, sticky mud, Tombs made good progress in the first race of the weekend; starting in eighth, he soon leapfrogged his way to sixth and then fourth, where he settled in for the remainder of the race.

On Sunday morning the track conditions had changed for the better with the track surface now tacky and grippy. Unfortunately, Tombs struggled getting into a rhythm and saw his sixth place at the start slip away from him, and he ended the second race in a frustrating ninth place. A few hours later in the final race of the weekend, things had turned around. A tyre change, coupled with some suspension and drive changes, helped Tombs get off the start quickly for a fourth after the first lap. Settled into a quick rhythm, he kept close tabs on his nearest rival in fourth, ending the race a solid fifth for a fifth place overall on the weekend.

Qualifying was really muddy, so I did one quick lap and qualified sixth, then in the first race I just rode steady and managed to get fourth, which was quite good. In the second race I just rode like a wally really, got ninth and was pretty disappointed about that. The bike felt awful, so we changed a few things, like the front tyre to a Michelin MS3, a few suspension things on the forks and the rear sprocket, and the bike felt so much better for the last race. I rode really strong and was fifth, but I lost the front brake with three laps to go. I was right on Mackenzie and Bradshaw, so that was a shame, but it’s still positive.

This weekend Lewis made good progress. Race two was difficult for us, but there are many positives to take from race one and three. All year we have been trying to close the gap to the leading bunch and this weekend we made it happen. We will take this momentum with us to the next round and hopefully we can start where we left off. Matt wasn’t racing this weekend, which is disappointing. He is still having some issues with his injury, but he is making steady progress and will be riding very soon.