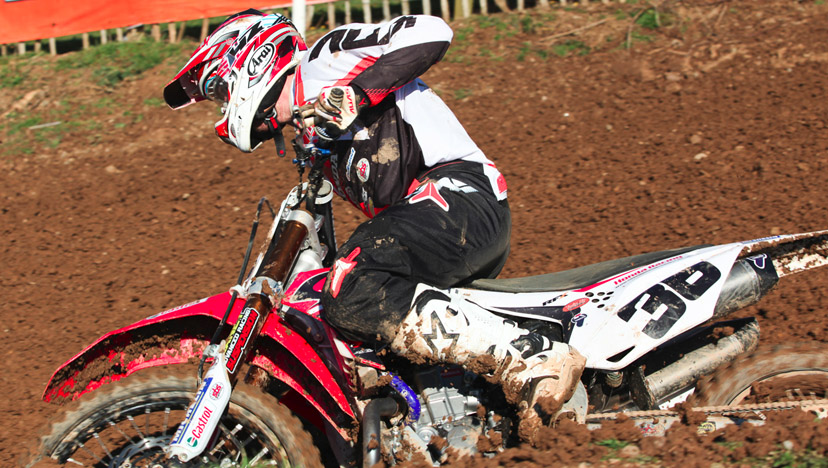 The first race of the season for JAR Honda couldn’t have come soon enough. After months of hard training over the winter, the team’s two riders, Lewis Tombs and Matt Moffat, were chomping at the bit to get started. The location was right on the Cornwall-Devon border, at the great track of Landrake. The weather was fine and sunny, although clouds made an appearance later in the day.

Qualifying sessions on Sunday went reasonably well. While Tombs did not quite make it to the super-pole session with his fourteenth place, Moffat did with a seventh, which was reduced to a ninth at the end.

While a bad race start made things somewhat more difficult for Tombs in the first race, he nevertheless found himself in the top fifteen by the chequered flag. The second race was a different ball game altogether; here he ascended to sixth fairly quickly, before having to concede positions to end in tenth. The final race was a mix of the two: An average start made it harder for him to make much progress up the pack and he became stuck in just outside the top ten again. All that done and dusted, Tombs collected tenth overall on the weekend.

For Moffat, things went horribly wrong in the first lap of the first race. A mistake sent him to the ground, and much to his dismay, a second rider collided with his stricken machine, damaging the exhaust and injuring himself. Although Moffat remounted and continued, he was unable to make enough progress to reach the top twenty and start collecting points. Race two however was another matter. Here Moffat soon found himself in seventh before settling into a good rhythm in eighth for a finish in ninth. The final race was somewhat mixed. After a good start in eighth place, he dropped back, only to catch a second wind with but three laps to go and recapture a position for eleventh and a thirteenth place overall on the weekend.

I’m really happy with the first race for the team, I just had a crash in the first race, which was my fault and which caused Scott Elderfield to crash, which screwed that race up, but in the last two I had a ninth and an eleventh, which I’m really happy with. Just a shame that I couldn’t put all three together and maybe could’ve gotten a top ten, but I like everything and would just like to thank Jonathan and everyone for everything they’ve done.

Today was an average day. I qualified fourteenth, which was alright. I missed out on super-pole but that was ok. In the first race I had a shocking start, was practically last, but I managed to push through to fourteenth. For the second start I went to the outside of the start and managed to sweep around in fifth, and then just didn’t really get into a rhythm and just rode tight and dropped back to tenth. I should’ve been ninth but I was held up by a back marker and got passed on the last lap. In the last race I had an average start, I felt I was riding really good, but this is a hard track to pass on, so I finished thirteenth in the last one. I earned points in all races but I’m not riding the way I’ve been practicing, which is disappointing and I need to sort it out.

Its always good to get the first race out of the way safe with good points on the board. Lewis had some bad starts and a crash, but battled through for a tenth overall. We know we’re we have to improve and I believe we can give a better account for ourselves at the next round.

Matt qualified well and made it into super-pole. After regrouping from his race one crash, he tried hard to salvage any points. He surprised us a little with his finishes in races two and three. We knew he is capable of top ten finishes and to have them this early on has given us a good platform to improve on. We’re looking forward to the next race.