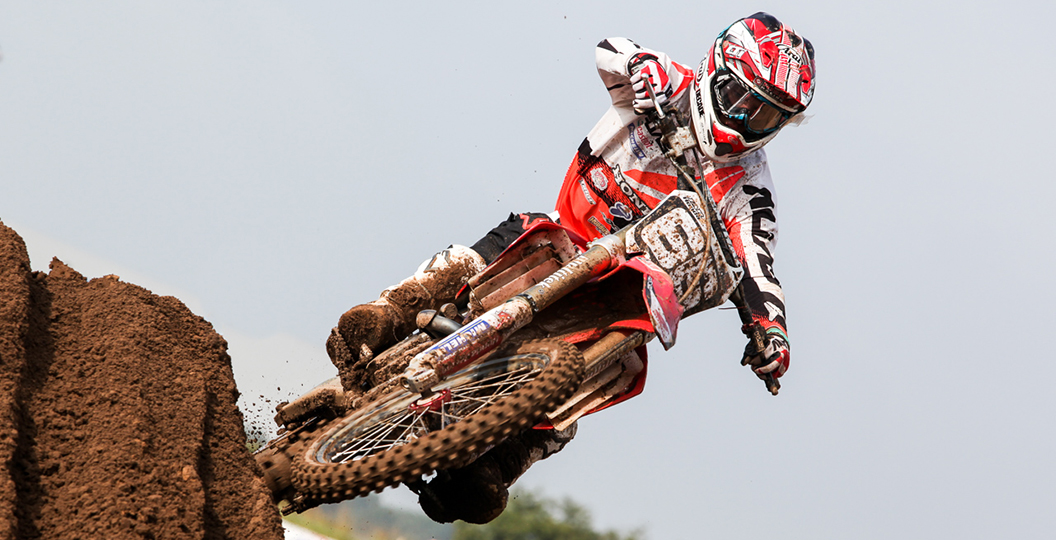 JAR Honda back in top ten.

After being forced to sit out a round due to a wrist fracture, JAR Honda’s Lewis Tombs returned to join MX1 team-mate Matt Moffat for the sixth round of the Maxxis British Motocross Championship at Fat Cat Motoparc in Doncaster this past weekend.

After overnight rains firmed the track up somewhat, Tombs hit the track for the qualifying session of the MX2 class, in which he qualified seventeenth. Subsequently, Moffat put his fastest lap in in the MX1 qualifying session, qualifying for the super-pole session and finishing in ninth.

For Tombs, the first race got underway with him mid-pack. A lap later though, he crossed the line ten positions down, having hit the dirt hard with another rider. Despite the setback, Tombs was back in the top twenty just a few laps later, performing some damage limitation in seventeenth to the chequered flag. That was the monkey off his back though as he finished the second race in the top ten with some early gains to eighth by mid-race. The final race was a repeat of the race before; after quickly moving into eighth early in the race, Tombs had to concede his position soon after, ending the race in tenth again for a tenth place overall on the weekend.

For Moffat, the excellent qualifying position did not lead to a top ten place at the end of the day. Much to his chagrin, the first race ended with Moffat in the pit lane and a broken bike after being involved in an on-track incident whilst inside the points. After some frantic spannering between races, Moffat went to the line again. Again disaster struck, this time with the top ten within sight. This time, Moffat was stranded only yards from pit lane with a cracked casing. The final race finally delivered the results that the team had been looking for; another bad start saw Moffat back in the top twelve three laps later and scrapping for top ten positions. With the chequered flag waved, he finished twelfth, and twentieth overall on the weekend.

I qualified seventeenth, I just wasn’t getting into the track and struggled really, but considering that, it was alright. In the first race I had a good start and then went down with Bryan Mackenzie unfortunately, and was right near the back, three or four from last, and managed to work my way back to seventeenth. In the second race I had a really good start, hung on in about ninth or so, lost a couple of places and then someone broke down and I ended up tenth, which wasn’t so bad. In the last race I had no energy whatsoever. I was going good the first four or so laps, rode strong and managed to pass a few people but then had nothing else left to give, so I had an easy tenth, which was alright. I was tenth overall, considering the last four weeks with my wrist, it’s not a bad day.

It’s been a bad day, there’s not much I could do but I qualified good and I actually felt good coming into it. The first race I had a DNF, I ran into the back of Jamie Law and couldn’t avoid it, in the second race the bike broke, and in the final race I had a steady ride for a twelfth. I didn’t ride very well and struggled, but I’m still in one piece and thank you again to everyone that helps.

It was great to have both riders back fully fit and under the awning again this weekend. Lewis was unsure whether he would ride until a mid-week decision after consulting with his specialists. To come away with a tenth overall is more than we expected; we’re happy with his result while nursing his injury. Matt must be breaking a lot of mirrors in his spare time as his run of bad luck still hangs on his shoulders. We know he has the speed to fight inside the top ten every race, but an unavoidable crash in race one and an engine problem in race two prevented him showing all his potential today. We will regroup and make things better for the next round.