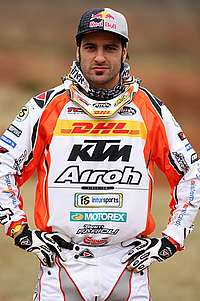 The KTM Enduro Factory Team in 2013 welcomes the return of one of its most popular and successful riders, Iván Cervantes of Spain. Cervantes, who rode with KTM from 2002 to 2010 before having a brief foray with another team, has a string of world championship and Spanish national titles to his name.

He returns to the Orange factory team to contest the E2 class alongside Johnny Aubert of France as this is the only class in World Championship Enduro where he has not won the title.  Iván will ride the KTM 350 EXC in the 2013 season.

Factory team boss Fabio Farioli said the return of Cervantes was a very welcome move. “Iván was born into the sport with KTM. He enjoyed a great deal of success while riding with us over a very long period. It was natural that he wanted to experience a change and race with a Spanish team but we were looking for a top rider for next season and we think he can win again. He has the capacity and with the KTM 350 EXC we will give him the power to do so.”

Farioli also confirmed that Cristobal Guerrero, who races in E2 last season will join KTM’s world champion Antoine Meo in E1 in 2013 while Christophe Nambotin, the title holder, will contest the E3 class. “We will also have several KTM-supported riders in E3,” Farioli said.

Began his career as a Motocross rider in which he won five Spanish national titles before moving to Enduro.
He has raced on a KTM since 2002