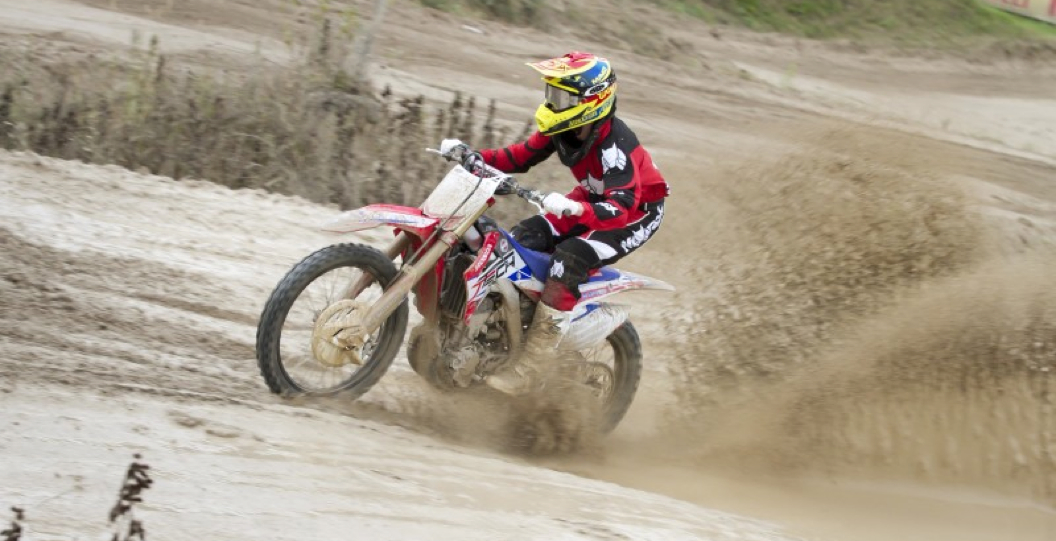 The JTech Honda Racing team ran their first official test with new EMX250 riders Albie Wilkie and Nick Kouwenberg earlier this week at the Mantova track, Italy. The Honda CRF250R was a new experience for them but both took to it well and grew ever more comfortable on the bike.

Wilkie is making the step up from winning the 2014 Honda 150 European Championship, which earned him his supported place with JTech Honda. The young Brit had to contend with a new bike and a track that he hadn’t visited before, which was waterlogged in places after torrential rain from the day before. Despite all this, Wilkie showed great promise, adapting to the track quickly and impressing the team with his performance.

“When I walked through the factory door it was a massive shock” said Albie. “The bike is a huge difference but the people I’m meeting and the whole experience so far is unreal. I think that’s why the nerves were there when I arrived at the test; I saw the team trucks, everyone standing there and I just thought ‘Wow, I’m part of this Honda family’. Being with JTech is such a big step for me. It was a really good test. The more time I spend on the bike the more comfortable I feel and the better it gets. I will take a test bike back home later this month, and I’ll be out on it constantly!”

Nick Kouwenberg ended the 2014 season strongly with two race wins and two overall podium finishes, and looks to continue this strong form in 2015 as he aims for the EMX250 championship title with the JTech Honda team. A rejuvenated “Kouwy” quickly adapted to the difficult track conditions and was looking very comfortable with the Honda CRF250R.

“I rode Grands Prix in the past but I had two years out of the paddock because in 2012 at Mantova my shoulder popped out on a jump and I was injured for the rest of the year so I could not get a seat for 2013” said Nick. “This year, I won two races and made two podiums in the last four races so I proved myself again. I am very convinced it is possible to fight at the top with my speed and my race character on the CRF250R next year.

“I’ve been in a lot of teams so I know that I need people with positive energy. If they are positive then I know the possibility of my talent. JTech Honda are really positive people and they let me do my thing but we are still a close team and work together very well. We can show people that we can be up front with this bike; I feel really strong with it.”