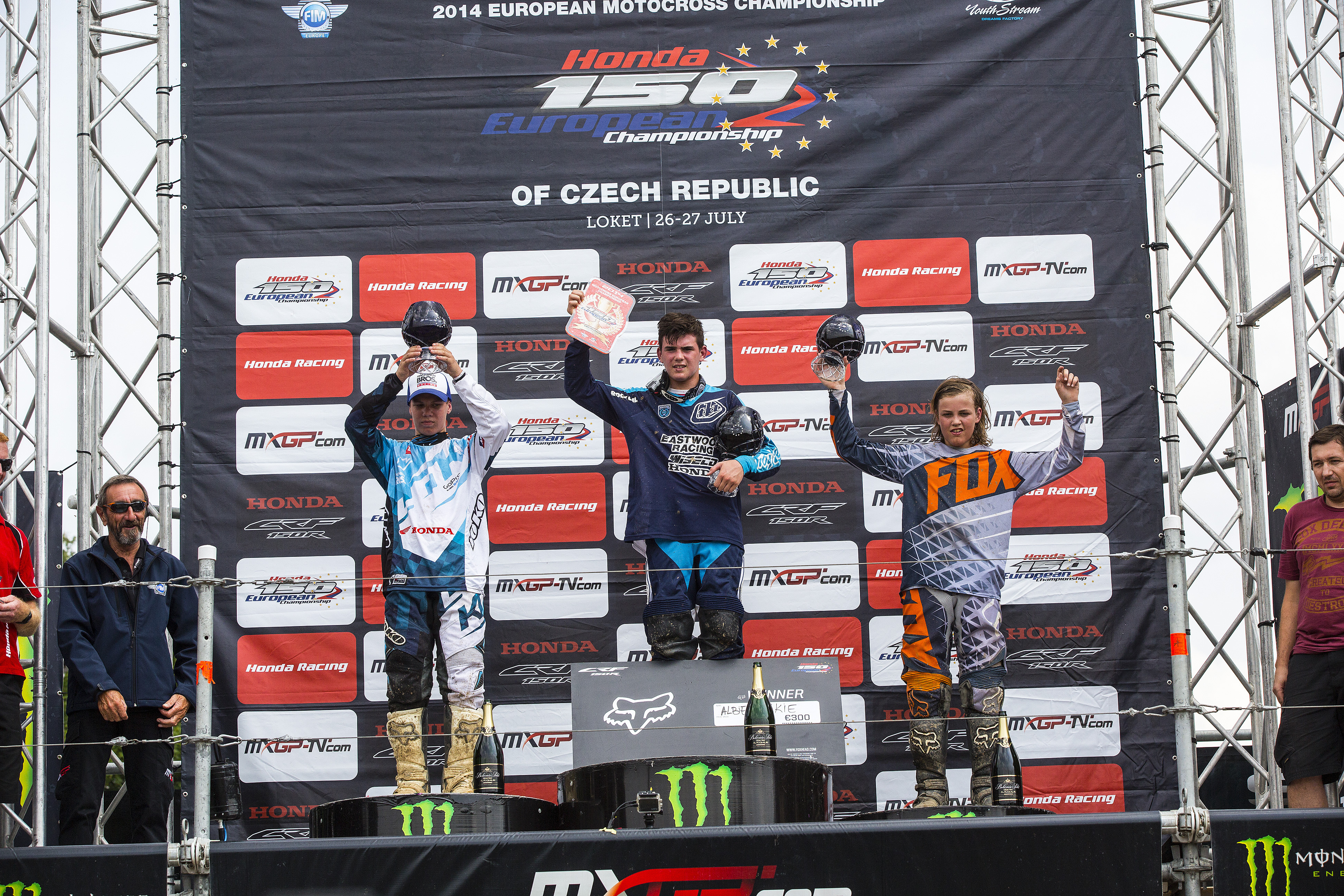 Albie Wilkie took his fourth race win and his third consecutive overall Grand Prix victory in the Honda 150 European Championship in the Czech Republic today with a dominant ride.

He took the early lead with a great start on his CRF150R and then never looked back, delivering a succession of fastest laps to steam away from the pack in a class of his own. Combined with his second place finish in yesterday’s race, he takes the overall victory in the Honda 150 European Championship at the MXGP of the Czech Republic.

In a reversal of yesterday’s race, this time it was championship rival Jere Haavisto who had the comeback to make after he crashed on the first corner and found himself in 14th. Fighting back through the pack, he minimised the points-damage of Wilkie’s win by finishing an impressive second, just ahead of Albin Larsen who took his fourth top-three of the season to finish third overall.

Just one round of the Honda 150 European Championship now remains, held next weekend in Lommel at the MXGP of Belgium. With the title gap between Wilkie, leading, and Haavisto at just ten points, both will continue to fight tooth and nail for the prize of a Honda-supported ride in the EMX250 series next year.

“The first race didn’t go to plan as I had a bad start. I managed to put myself through to second but couldn’t overtake Jere which was a bit of a downer, but today turned the complete opposite way. We managed to get out front and get ahead which was part of the plan for this weekend. I think it helped jumping the big step-down after the finish line – it was a bit of a tricky one but I just opened the throttle and wished for the best! It’s really tight between Jere and I, so I just have to keep confident in Lommel. Now I’ve got the red plate I just have to stay strong and hopefully win the series.”

“There’s been some very good and close racing this weekend, so very well done to Albie for taking his fourth win of the season. On this track it’s not easy to come through the field so there have been some very good performances from Albie and Jere especially to come back through quite a strong pack in each race. The two are very closely matched so with one race left and just ten points between the two riders at the front, the season finale will be a very close title fight. A Grand Prix track like Loket is all about finding the traction and a four-stroke is very good in traction getting a lot of the power straight down to the track around these slippery off-camber turns, so I’m very pleased to see how well the CRF150Rs have performed this weekend.”