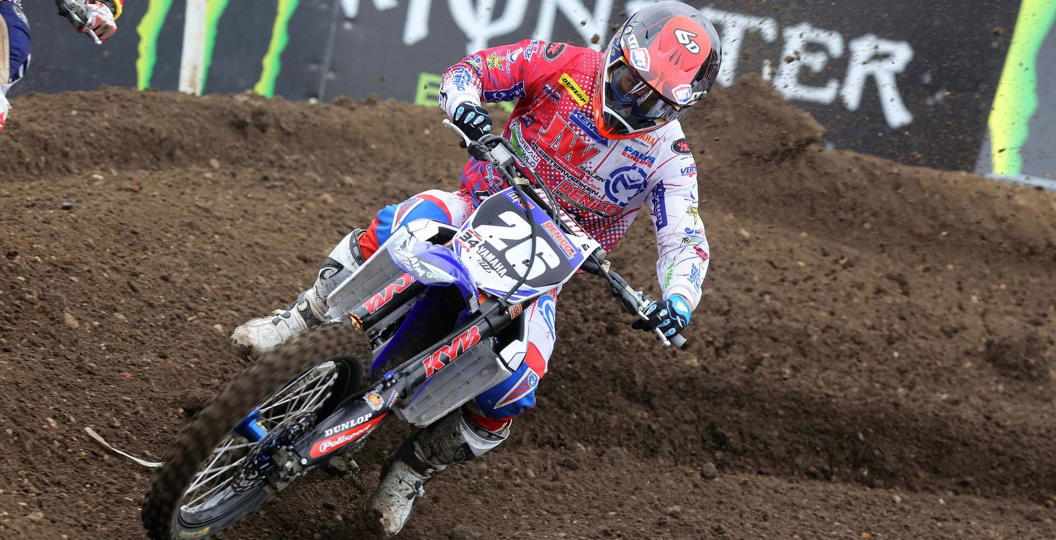 Chris Blose was a privateer in Monster Energy Supercross this year, but he scored a lot of points and ended up seventeenth in the stacked 450MX field. However, despite this it was tough for him to find a ride once again, so he taking a different path; he has signed for Babbit’s Kawasaki to do the arenacross series in ‘15! The Babbit’s squad is the most esteemed AX team and has claimed many, many titles, so Blose will be in a good spot!

Luke Styke has confirmed that he will be heading back to Australia in 2015 to race for the official KTM team over there. His maiden term in the FIM Motocross World Championship has been littered with injuries and issues within the Kemea Reytec Yamaha squad that he rode for, which has obviously hindered his performance. It is sad to see Luke go, although he has not ruled out a return to Europe in the future – the link to KTM could help him.

Following the penultimate round of the Maxxis British Championship, Neville Bradshaw revealed in an exclusive MX Vice interview that he was going to retire at the end of the season. Well, it seems he has had a change of heart, as it was revealed this week that he will pilot a Husqvarna under his own ‘272 Race Schools’ banner at both the Maxxis British Championship and MX Nationals. Obviously it is going to be great to have Nev out there for another year, and his switch to Husqvarna will be an interesting one to follow.

Bradshaw had this to say on his new deal: “I am really excited to begin this new chapter in my career and work closely with the guys at Husqvarna Motorcycles UK. They are a great bunch, with awesome product and a strong motivation to win. I’m grateful that they are supporting me on both the racing and training school journey I will be taking on in 2015. Together I believe we have a great package and share the same work ethic! I’m looking forward to delivering Husqvarna some strong results as well as helping to bring on the youth of UK Motocross. See you all in 2015”.

Australian veteran Jay Marmont also announced that he would be retiring at the end of this season, but first he will be competing in the Australian Supercross series, which was always his plan. However, he was going to do that with the CDR Yamaha team, before Yamaha pulled the team from SX. Instead Jay will now be aboard a Penrite Honda for his final couple of races before hanging up his boots.

It was one of the worst kept secrets in the paddock, but it has finally been officially announced that the Troy Lee Designs Lucas Oil squad will be making the switch to KTM with increased support. Red Bull has come on as a title sponsor too, so the team should have so much more support in ’15 that they will make waves. The rider line-up has not yet been announced, although Jessy Nelson and Shane McElrath will be back there. Darryn Durham is linked to the team too.

The Phoenix Tools squad have certainly been busy planning for 2015! James Harrison is the latest rider that has been added to their line-up for the new season; he will compete in the various domestic championships (and possible a GP or two) in the MX2 class. With Harrison, Michael Eccles and Luke Norris on the squad, there is going to be some great young talent beneath the tent.

When Evgeny Bobryshev bowed out of the Italian GP in June with a leg injury, he planned on being fit for the Motocross des Nations, which is an event that he typically thrives at. However, after riding for the first time earlier this week, the decision was made to withdraw from the race at this early stage. Why? Well, he explains in this quote:

“I was riding for the first time again a few days ago. Dr Claes told me the leg is healed 80 per cent, but it is still swollen and there’s still tissue damage. The first day of riding was ok but I was taking it slow round left corners, then on the second day I went to Lommel. I touched the leg on the ground in a left corner and there was still pain so I thought ‘no, I don’t want to have to think about my leg when I’m riding, I want to concentrate fully on racing’. It will still take time for my leg to recover fully, and that’s why I have decided not to compete in the Motocross of Nations this year.”

Although Jeffrey Herlings originally aimed to return to the FIM Motocross World Championship at the finale in Mexico in an attempt to retain his MX2 title, it looked like he may be able to make the penultimate round this weekend. However, after waiting until the last minute it was decided that he would sit out Brazil and listen to his doctor’s advice. It now sounds like his status for next weekend has been called into question too, as he may have an infection in his leg. There is no official word on that yet, but when confirmation is released you’ll find the information here!

Graeme Irwin looks set to make a return this weekend at the seventh MX Nationals round this weekend, which will be held at the sandy venue of Preston Docks. Irwin crashed very hard at Cusses Gorse in the middle of August and had a bad concussion as a result. The Irishman took the appropriate amount of time off though and now looks set to hit the track again. Whether he will be one hundred percent or not this weekend remains to be seen, but he’ll certainly be in contention for a spot on the box.

Finally, after the goal posts have been moved a handful of times, Arnaud Tonus will return to action this weekend in Brazil. It is going to be quite interesting, as he will surely be eager to garner his second GP win and prove that he would have been the champ, had he not got injured. The CLS Kawasaki rider could also steal more points from Jordi Tixier and make it harder for him to chip away at Herlings’ advantage. The MX2 class is an exciting one, folks!