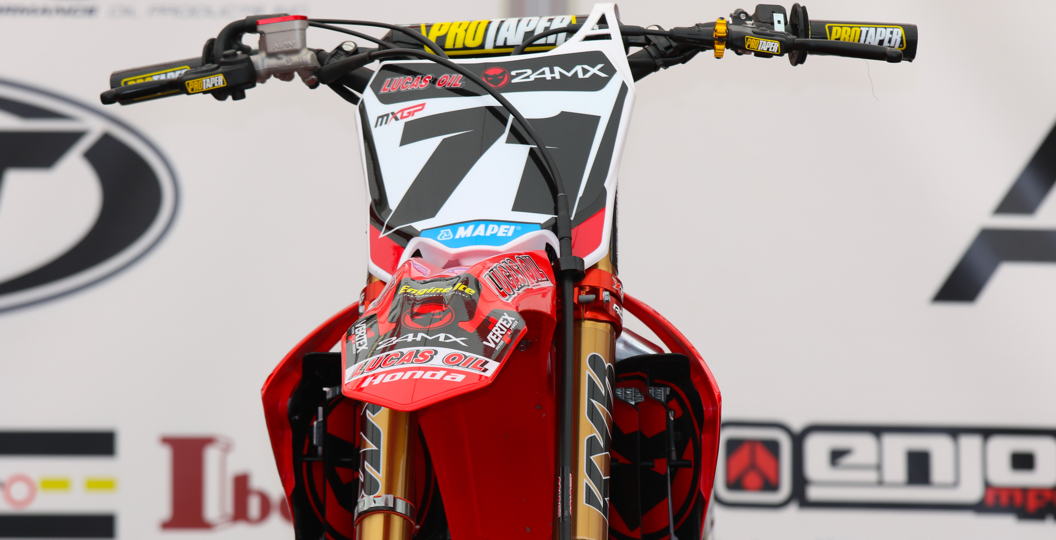 A lot has changed in the MXGP summer break, it seems, hence why this is a particularly hectic ‘waiting list’. It may be the busiest yet! A lot of high-profile riders have dropped out ahead of this weekend, but then a couple are set to make their return.

In for the GP of the Czech Republic…

Romain Febvre: After what seems like an eternity, Romain Febvre will return to action at Loket. Febvre now sits third in the MXGP standings, just thirty-two points down on the eight-time champ Antonio Cairoli, so will be looking to return to the runner-up spot and salvage something from this year.

Kevin Strijbos: Kevin Strjibos has been missing since the Spanish GP at the end of the May, as a small wrist injury was not identified correctly at the beginning of June. He’ll be back tomorrow, however, but is expecting a lack of race fitness to come into play as the weekend progresses.

Damon Graulus: Having Damon Graulus on track will be a positive point for the 24MX Lucas Oil Honda team, who have had a turbulent campaign to say the least. Graulus injured his thumb at the British GP in the middle of June, but that is now not a problem.

Calvin Vlaanderen: It was so long ago that Calvin Vlaanderen missed the GP of Lombardia that it is easy to forget that he broke a bone in his shoulder blade. He is back now though and hoping to improve on his current ranking of eighteenth.

Henry Jacobi: A concussion at the British GP ruled Henry Jacobi onto the sidelines at Mantova, but he’ll be back this weekend. This should actually be the type of surface where Jacobi thrives, so perhaps he’ll manage to fulfil some potential?

Giuseppe Tropepe: Giuseppe Tropepe got back on a bike during the summer break and won a race in his homeland just last weekend, so it seems he is now in a position to capitalise on his opportunity with the J-Tech Honda team.

Shaun Simpson: It may seem odd to include Shaun Simpson here, but he did miss the GP of Lombardia with that hand injury. ‘24’ has raced two Maxxis British Championship rounds since then, so will obviously be contesting this weekend’s GP.

Out of the GP of the Czech Republic…

Jeffrey Herlings: Red Bull KTM finally confirmed that Jeffrey Herlings would not be racing the GP of the Czech Republic earlier today. Herlings only broke his collarbone twelve days ago and his one hundred sixty-nine-point lead is extremely safe, so it is undoubtedly a wise choice. His status for the Belgian GP is unknown.

Aleksandr Tonkov: Aleksandr Tonkov withdrew from the GP of the Czech Republic this morning, as he still has not fully recovered from the back injury that he sustained in April. Doctors advised him to rest, so he is doing just that.

Vsevolod Brylyakov: Vsevolod Brylyakov has had a bit of a rough run lately, unfortunately, and will miss the GP of the Czech Republic as he continues to struggle with an ankle injury. His status for Lommel is unknown.

Matiss Karro: Oh, Matiss Karro! His return to MXGP has ended prematurely, after he sustained yet another knee injury in the summer break. There is no way he’ll be back by the end of this season and, at this point, it remains to be seen whether he’ll be in MXGP next year.

Roberts Justs: This one is unconfirmed but, seeing as his bike was nowhere to be seen beneath the HSF Logistics awning, it seems Roberts Justs is out again. The last update we received was that he felt “a little better” a week and a half ago.

Brent van Doninck: Brent van Doninck underwent surgery on an injured thumb following the GP of Spain and was originally slated to return around Lommel. No specific return date has been set just yet and Karlis Sabulis continues to act as his replacement.

David Herbreteau: There is still no specific timeline on how long it’ll take David Herbreteau to recover from the ankle injury that he sustained in Spain, so do not expect to see him on track too soon. The Gariboldi Honda squad have not opted to fill his spot.

Ben Watson: It seems that Ben Watson is still quite far from one-hundred percent, as he was on crutches at the British GP. Seeing as his team do not do the flyaway events, time is running out for him to get back on track.

Ken de Dycker: I am sure that this will not shock you too much, but updates on Ken de Dycker and his recovery have been infrequent. He is, quite simply, working behind the scenes and building himself up. He was hobbling around without crutches at Matterley Basin.