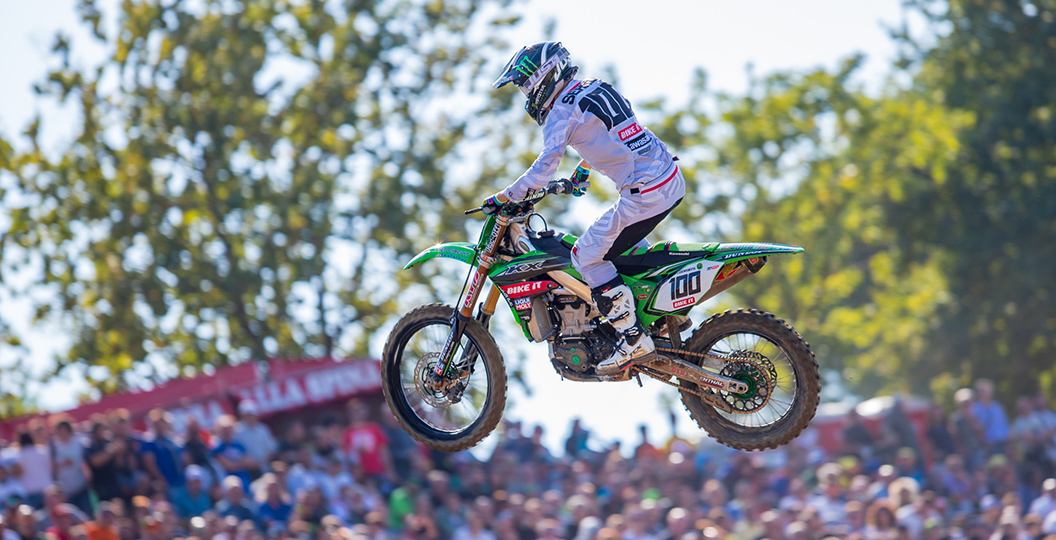 The FIM Motocross World Championship has ended! The final round of the campaign, the Grand Prix of Italy, was not exactly kind to Tommy Searle, but there were still bright spots for him to extract from the weekend. Searle touches on that in the exclusive MX Vice interview below, plus a handful of other hot topics.

MX Vice: Well, a good start would have helped today and you did not have one of those. I guess that kind of sums up your weekend in one.

Tommy Searle: Yeah. I need to work on my starts over the winter. I think the team for next year have already started on it. It is one thing that I really need to improve. It is just the same story every week. It is so difficult without a start. I am not a level above the guys I am racing with that I can make the difference up from a bad start. I can come through a certain way and if I am having a good day, I can make my way through sometimes better than other days.

Yesterday I was not happy and then this morning started off a little bit better in warm up. The races were okay. First race I came through to twelfth. I passed a few guys and ended up twelfth, then the second race I got a better start because I tucked up the inside. I was about tenth in lap one, but then I got hit on the first lap and I went down. I came from way back. I was completely last on my own and I came to sixteenth. Actually, I rode really well in parts of the race. It is what it is. That is all I could do from the position I was [in].

Are you pissed with the way today went? Did you come into here with unfinished business and something you wanted to achieve before the season ended or is it really just a case of it is what it is?

No. I have been working really hard the last six or eight weeks. I feel actually the best I have felt all year, fitness-wise. The work I have been putting in the week to build up for a strong end of the year and the Motocross of Nations, so I felt great coming into this race and I wanted to come away with a great result. It is not easy. Just a bad start or a bad qualifying yesterday makes the weekend a lot harder than it should be. I am disappointed with the day, but it is what it is now. I move on and stay positive and I hope to have a good race next weekend.

What did you make of the track? It seems like no one really knows what to make of it. It looked cool. It looked fun to ride, but not the best to actually race on?

No, it was not fun to ride at all. It was difficult to ride. Very technical. It was not horrendous, but it is a little bit dangerous riding on these tracks. There is obviously no one there to point things out. We are off the track onto tarmac. Some parts are way higher than the ground level, so sometimes you are like ten feet up in the air if something goes wrong. Yesterday I nearly looped out and I do not know how I even saved it in the qualifying practice. I just almost looped out for six seconds.

I was thinking, if I went down then I would have got really badly hurt. It is so slippery and then all of a sudden you hit grip. It is like stony, blue groove and then real grippy soil. When the bike was spinning yesterday, I was a bit too aggressive on the throttle and it would just catch grip and I would be all whiskey throttle. It happened a few times. Today we mellowed the whole bike out and it suited the track a lot better. I felt better on the track, but the results were not what I wanted.

What is the plan from here then? Obviously, you have only got one week to turn around and get to America and get on track there. I guess you will be flying soon?

Yeah. I am not worried about myself or anything. I do not feel I need to work on anything. I know I can do it on the day next weekend. I like the Motocross of Nations. I think that track will suit me. I will perform and get the job done on the day. Now we fly Tuesday. I am flying with Mark [Chamberlain] and Ben [Watson]. I do not know if Max is on the same flight. Fly out Tuesday and then Mark’s organised a house in the Bronx. We will get there and then see if we get robbed or anything while we are there.

Putting the pressure of the ‘Nations aside and all of that, are you just excited to get out there and ride RedBud again? You had a good time in America and that was one of the highlights of your career. Just to get back there and back on one of those tracks, that must be a bit exciting.

Yeah. I am looking forward to it. Actually, at the moment, I do not really feel much pressure. I have put the work in the last eight weeks. I am ready for the race. I am just working on myself, focusing on myself, not letting any negativity get me down or anything. I will just stay positive this week. I am flying out Tuesday. We are going to pick a bike up out there. I will ride Wednesday. We have not shipped our bikes, so we are going to get a bike, take our engine and suspension and then we will put it all on the bike to test Wednesday or Thursday out there then we will go into the race weekend. I feel very confident going in. I look forward to spending this week with the team from Tuesday onwards and having a good weekend.