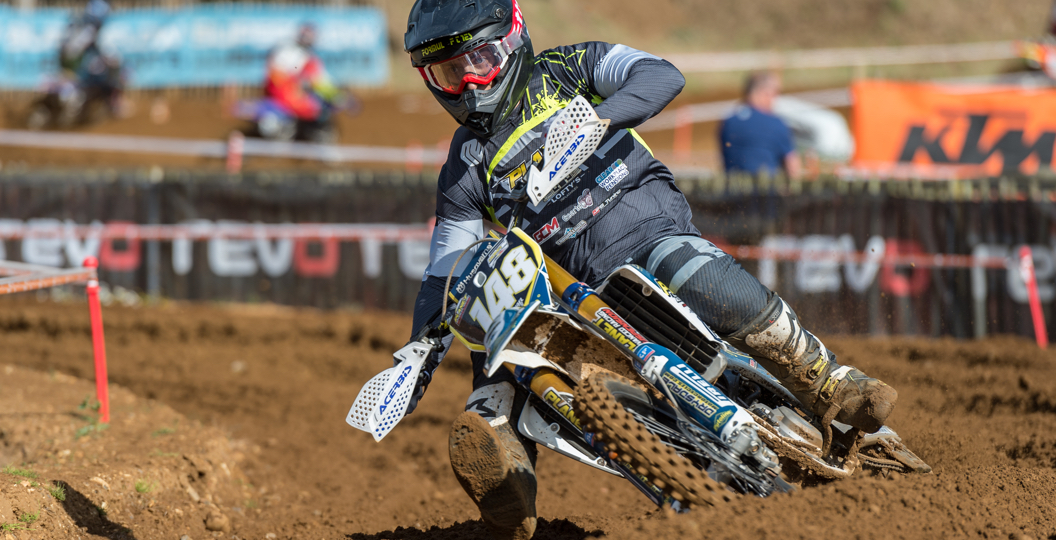 Micky Eccles has been present on the British scene for quite some time now. It was only this year that he really broke through, however, and started to record results that garnered attention from teams. The finishes that he had in Europe were also noteworthy, hence why we decided to find out how he plans to build on that in the future.

MX Vice: A mid-season transition to a new team would throw most people off… You really thrived on the new bike though. How much of a relief was it to get a higher level of support?

Micky Eccles: First of all I can’t thank Scott from Planet Suspension enough for giving me a chance, believing in me and letting me ride the Putoline Planet Husqvarna. I went from doing everything between me and my Dad, then to get the help from them was a huge weight off my shoulders. I clicked with the set-up and enjoyed the bike straight away. It made the racing fun again, as I took pressure off myself and went and enjoyed it more.

It’s not just your British results that have been noteworthy this season, as you also showed potential at a few European rounds; Valkenswaard comes to mind.

Yeah, I did the three European rounds this year. I feel I had the pace to be right up front in those races, but I seemed to have a very lot of bad luck at those events! The only race I didn’t have a bike problem was moto two at Valkenswaard, when I finished fourth place.

What do you think your ceiling is in Europe/Britain? You’ve had a podium, so a win can’t be too far away.

You must feel like you’ve broken through somewhat this year and are, consequently, keen to build on that in the future.

Yeah, this year I decided to work with Rich at the RMJ Pro Academy and it has really helped with my riding and self-belief. I was really struggling the last two years and was in a bad place myself, but together we have fixed these issues. We have progressed all-year long and made big improvements. It will be good to get another strong, hard winter done for next year.

In order to do that, you obviously need support of some kind and to be given that opportunity. Have your results had the desired effect on teams/sponsors for 2018?

I agree, you need a team that has the same goal in mind and that is to win. If you have a team that will put everything into achieving that then you will have a good time. I have spoke to a few teams regarding 2018, but I haven’t had an official offer as of yet.

Is that weighing on your mind at all and distracting you from your main goal, results?

It doesn’t weigh on my mind, my only goal is to win. If I go to the races and win then it’s only going to make it easier for me regarding teams for next year.

What is one thing you think you’re missing currently? Either something you’re struggling with or need in order to be successful in the future.

In all honesty I feel I have the speed in the British, but I am currently lacking abit of the intensity. We have been working hard on this and making big improvements.

How keen are you to breakthrough to Europe and establish yourself on that scene? Are you happy being a big fish in a small pond in Britain?

I would love to be able to race in the EMX250 and the British series in 2018. That would be my perfect plan, but it all depends on what deal I can get as the European races aren’t cheap to take part in. But, for sure, I would like to do both series, as I feel I can contend for a championship in 2018.

Whilst trying to put focus on getting a ride for next year, are you also turning your attention to active promotion off of the bike with social media etc?

I always try to keep my social media up to scratch and updated. But, like everyone does, sometimes you let it slip a little, so I do plan to keep my pages up to date and post regular updates on there to let everyone know what’s going on! I’d like to just mention a huge thanks to the sponsors who are getting me to the races each week: Putoline UK, Planet Advanced Racing Suspension, Lofty’s Inflatables, Clear Workplace Pensions, JFS Tuning, Gale Common Moto Parc, Cadwallader Ltd, Geartec, Formula Fitness, GTi Nutrition, Seal Moto and Ethen Goggles.