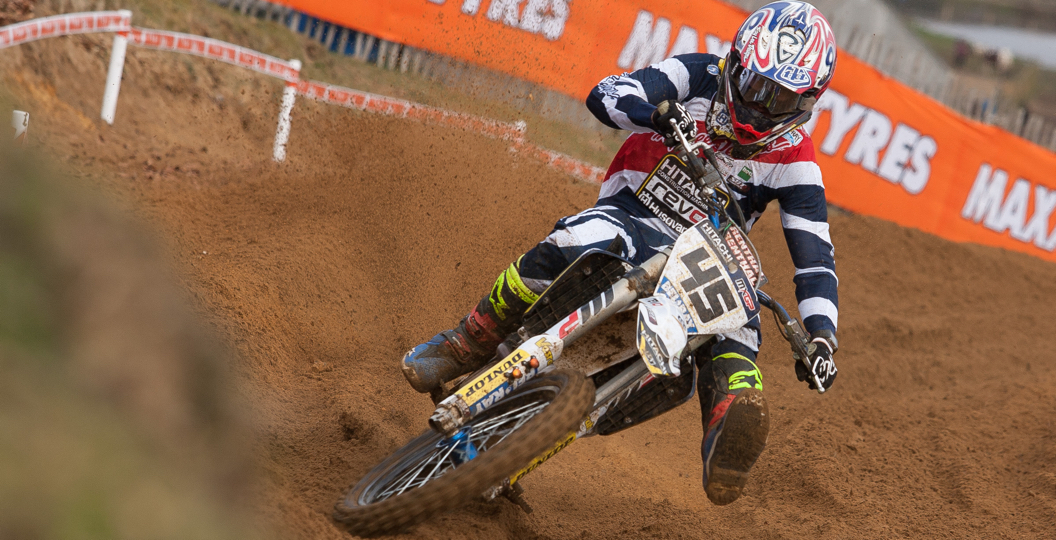 Although Jake Nicholls has spent very little time on track over the last year and a half, his status as a fan favourite hasn’t altered in the slightest. Our statistics serve as proof of that; the post-race podcast with him this past weekend was one of our more popular features. For this reason, we’ve transcribed what he had to say for your reading pleasure.

MX Vice: I feel like what was going to be a positive day turned into a great one at the end there?

Jake Nicholls: Yeah, that is exactly right. It started off with a sixth in qualifying, then in the first race I finished a steady seventh. It was a very frustrating race personally, because I kind of got stuck behind someone and, because I haven’t raced much in the last year, I felt like I had forgotten how to pass! It is always difficult to pass here and it didn’t seem to cut up very well in the first one – it was still quite smooth. In the last one I got a much better start and gave myself a bit of a head start. I sat in fourth for a little bit, then got into third and basically had a clear track for the first time all day.

I felt like I could start trying some things and start riding how I could. I think I dropped like a second off my lap time instantly, just from being able to do what I wanted to instead of attacking someone or riding defensively. Midway through I had my head down, was trying and next thing I caught Shaun [Simpson]. I’m not sure what happened to him, but I was riding good at that point. Coming into the day I was obviously lacking confidence after two years of injuries and I can take a lot from today, definitely.

MX Vice: Especially in regard to your fitness, I guess, because you were there at the end of the moto and these races are longer now. That has got to bode well for next week?

Jake Nicholls: Exactly. I think a lot of people know that I made a lot of noise about how I didn’t like the twenty-minute races. I think it shows, because it is half past four now and most of the people have gone home already. That is what they want, they don’t want to be here at half five or six o’clock at night. From a rider’s perspective, it is realistic as well. When you want to be a world champion you don’t have to be good for twenty minutes, you have to be good for thirty-five. It is back to what I like, with the thirty minutes. I’m not surprised [with how I performed]; I’ve worked really hard since November. I wasn’t tired after last season, because I did bugger all.

I could start with a clean slate. Fitness was good and the track was tough at the end, so definitely if I was going to be knackered it would have been then. We’re just getting the bike better as well, it is early days and we’re a bit behind as we didn’t get the bikes very early. This week was the first time that I tested the whole time I’ve had the Husqvarna, but the team are cracking on now and we’re making progress for Valkenswaard.

MX Vice: How much progress do you still feel like you have to make with the bike? Are there certain areas that today you noticed you need to improve?

Jake Nicholls: Yeah, definitely. I still need to get the suspension a little better. We aren’t a mile off, because I think I showed then that it was going alright when it was rough as hell. In a few places it was riding really well, but in a few spots I wasn’t happy. I do need to work on that, but also the power. I’m pretty inexperienced with the 450. I did half a year in 2014 before I got injured, then made a bad decision to ride a 350 last year. Basically I don’t really know what I want from a 450.

We always want more power, but [I don’t know] where I want it as such. We have gone for a little more torque at the minute, but as I get more used to it I think we’ll get more power throughout the year. The last thing I want to do is have a load of power and not be able to handle it, because it still gets away from me every now and again. I’m still a bit of a 250 rider at heart – that was the last time I went quick really!

I don’t want to make too much of an animal of it yet, so every month we’ll just edge away at it and get a bit of a stronger motor. I’ve rode the bike stock since January and, as a standard bike, it is a hell of a thing. It’s definitely given us the ability to have a head start.

MX Vice: You said you got the bike quite late. Do you and the team have the ability to test lots of things, or are you a little restricted?

Jake Nicholls: We can pretty much do what we want really. Our engine tuner is in Holland, which is perhaps the only thing holding us back. I’m based in England now and so is the team as such, they have a workshop in Holland or Belgium though. When we’re there the guy has the electronic technology to do it, so we can definitely do it. I’ve just got to keep pushing. I think the whole team seems to have a good positive vibe at the minute. If we put one hundred per cent effort in, we’ll get one hundred per cent back from them.

MX Vice: So, from this point on, I guess it is just about building momentum, with the bike and everything really?

Jake Nicholls: One hundred per cent. Going into the Grand Prix this weekend, I’m just going there to get a bit of speed out of it and a load of riding. Obviously at GPs there is a lot of riding on Saturday and Sunday, or Sunday and Monday in this case. It is another three races on the weekend, so we’ll get a bit more race fitness and some race craft back. You do slowly forget a bit of the race craft, but I definitely think I got some of it back at the end of today. We’ll just keep progressing – I’m not expecting big things yet. I think if we’re steady away, we’ll be doing well in a couple of months.