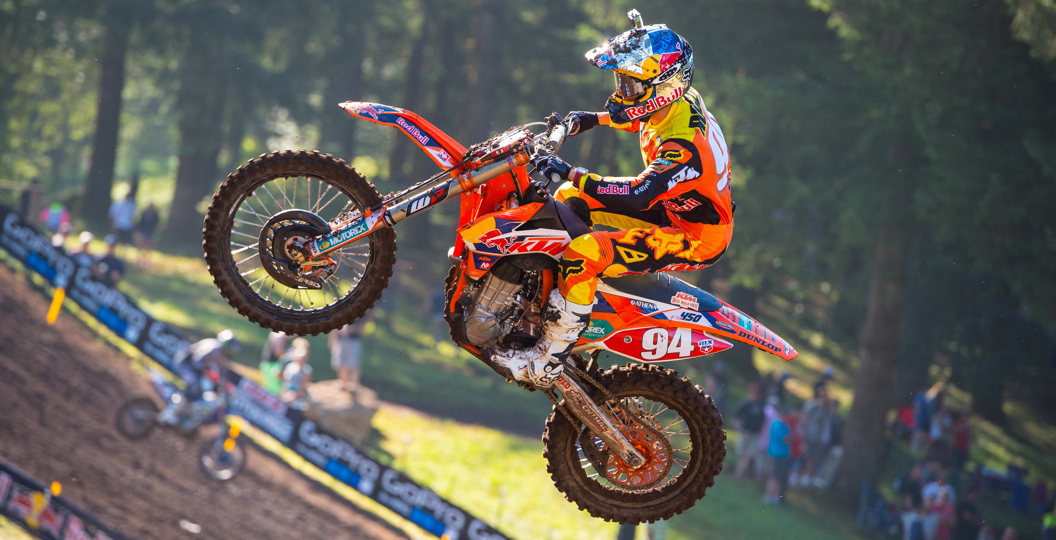 Question: This 450MX title fight is coming down to the wire. So, with three rounds left, who is going to win this title, Ken Roczen or Ryan Dungey?

@LewisPhillips71:  I think I said that this title fight was over not too long ago, and I was wrong, evidently. Honestly, I am finding it hard to call Ken Roczen the favourite for the championship now, despite the fact that he is fourteen points up currently. It would actually be more surprising to see him with the number one plate, because of recent form. Ken has not shied away from his struggles, and has supposedly started to put a plan in place to ensure he will not falter at the final three rounds. Whether it will work remains to be seen – Unadilla will be telling. Eli Tomac is going to be a factor in how this series plays out, as he helped Ryan claim an extra four points at Washougal, and you have to think that he is going to split the two at least a couple of times at the last handful of rounds.

@Jimbobarooney_D: So it’s not going to be James Stewart? It’s turning out to be a really interesting battle at the top, and one which Ken Roczen looked to have sewn up a couple weeks back. It was only six weeks or so ago that both you and I, Lewis, sat discussing Ryan and his development as a rider, or lack of, in comparison to his competition. He’s really turned it around, and with last week’s performance he looks stronger than ever. With a little luck, and if Kenny continues to struggle, I’m going to go out on a limb and say it’ll be the #5. Oh, and it’s great to hear him on the PulpMX show!

Question: Dean Wilson hasn’t set the world alight since he returned from injury. Do you think he will finish in the top three before the final round?

@LewisPhillips71: When Dean Wilson first returned from injury, some people started to slam him for his results, which angered me. Dean had only been on the bike for a couple of weeks before Muddy Creek (where he returned), and planned on racing himself back into shape, so naturally I felt that we had to give him time to build himself back up. However, a lot of time has gone by now, and there hasn’t been too many noteworthy results. Don’t get me wrong, there have been some good rides, I just think he should be better by now. Perhaps the week break will see him return much stronger? Back to the question, I don’t think he will get on the box (if you had asked me a couple of rounds ago, my answer would have been different).

@Jimbobarooney_D: Oh, another good one. That’s a really interesting question, and I’ll come out and say it – Deano hasn’t impressed me through the outdoors. I really expected more from him, and that’s taking into account his injuries. He simply hasn’t had the raw speed, which is really rare from the Canadian-Scotsman. With the competition from an on form Musquin, a relatively strong Pourcel, a charging Blake Baggett and of course JMart, I can’t see it unless he really steps his game up.

Question: How would you rate Christian Craig’s performance at the last four rounds? Do you think that he should continue after the break?

@LewisPhillips71: I was bummed when Christian Craig announced that he had retired, simply because he has so much talent. I believe that talent has shone through at the last four rounds, as he has posted some commendable results after coming off the couch, and despite the fact that he is still working full-time! His personal goal was to garner a top ten finish, and he did that at Washougal, which is no easy feat.  Of course, this has now fuelled the fire inside of him, and he is toying with the idea of racing Unadilla. I hope he does, because he deserves to be out there. Why stop when things are going so well?

@Jimbobarooney_D: Man, that guy has style, and lots of it! I’ll second Lewis (and everyone else’s) sentiments in saying that I too couldn’t believe it when he announced his retirement, but I still think it was the right call for him. You have to give it 100% and if even a small part of you isn’t committed, something isn’t going to go well. I actually think he should stop now. He’s had his fun, got that adrenaline kick and has come out unscathed. Quit while you’re ahead kiddo, especially with a new born on the way!